The UK’s education system, status as a business powerhouse and long-term capital preservation are just a handful of factors that make London a top property investment destination for many Middle Eastern high-net-worth individuals.

According to respected sales agent Dexter’s, the capital is currently the busiest it has been in over five years, with international sales up 85 per cent compared to last year – and it is buyers from the UAE driving much of this demand.

In addition, the attractive exchange rate and the UK Government’s Stamp Duty Holiday, aimed at revitalising the market following the Covid-19 lockdown, have both played a role in further bolstering activity.

On the banks of the River Thames, there is 30-storey landmark, The Dumont, where apartments boast some of the best views in the capital, taking in the Houses of Parliament, City of London and the London Eye.

Representing the jewels in the crown of the new development, this summer saw developer St James launch the Alta Collection, where prices start at £7,800,000. The seven skyscraping four-bedroom apartments sit across the 18th to 28th floors of the building, each with generous private terraces and beautifully appointed interiors.

Over in East London, Greenwich Peninsula, a 150-acre regeneration scheme set in a well-connected Zone 2 location, is proving a particularly popular choice for UAE buyers. Developer Knight Dragon is creating a new cultural district, which is already home to some 3,000 residents and a host of cultural spaces, educational facilities, restaurants, and lifestyle amenities.

Most recently, Knight Dragon released an exclusive collection of two- and three-bedroom penthouses at No. 5 Upper Riverside – a striking building perched on the banks of the River Thames – designed by globally-renowned architecture studio, Design Haus Liberty, with prices from £1.175 million.

Meanwhile, many of London’s well-established neighbourhoods haven’t lost their appeal, especially those known for their quality of place and local lifestyle offering. In the capital’s prestigious SW6 postcode is King’s Road Park, which sits just 60 m from Chelsea’s iconic King’s Road – a shopping, leisure and dining destination in its own right. Transforming almost 12 acres into an exclusive new community, homes at King’s Road Park will be surrounded by beautiful, extensive landscaping. Homes within the latest release, The Terrace Collection, all feature expansive private terraces or balconies with views over the new public park or residents’ landscaped gardens. Prices start at £790,000.

Another key factor drawing Middle Eastern buyers to London property is its world-class educational offering. Though not a new phenomenon, new research from sales agent Knight Frank reports the education sector is set to contribute £700 million to residential property in prime central London over the next 12 months. With four of the world’s top 15 universities based in the UK, two of which are in London – Imperial College London and University College London – parents are looking to new developments as a base for their children studying overseas.

The Atlas Building, in Shoreditch, has seen lots of parents buying for their university-bound children, given London School of Economics, University College London and City, University of London are all within a two-mile radius. According to Andrew Hawkins, Director at Rocket Properties, the most important consideration for UAE buyers is the convenience, security and amenities a new development can offer.

Hawkins adds: “For Middle Eastern parents, buying a new build provides an added level of reassurance and peace of mind when it comes to their children studying in the capital, with a 24-hour concierge and flexible residents’ facilities being key. Many also have plans to hold on to the property as a long-term investment after their child has graduated, so a location well connected for business hubs like the City of London or Tech City, as well as for international travel, is also an important factor.”

Now over 95 per cent sold, there are just a handful of apartments at The Atlas Building with prices starting from £1.699 million.

Nearby, The Denizen, by Taylor Wimpey Central London, is proving to be another hotspot for international students. Located in the heart of the City of London, the new address is set to complete at the end of this year – perfect timing for the start of the January 2021 term. With its first residents moving in soon, there’s still a range of one-, two- and three-bedroom apartment remaining, with prices starting from £725,000.

The enduring appeal of a one-of-a-kind trophy home for buyers should also not be underestimated – especially when it comes with unrivalled design, residents’ amenities and panoramic views. Without the traditional spring launch period – normally the busiest time of the year for London property – this autumn has seen a swathe of new addresses and luxurious properties coming to the market.

In west London, St James has launched the Cassini Tower at White City Living. Setting a high standard of living rarely seen in this part of the capital, the new collection of one-, two- and three-bedroom apartments feature far-reaching views over the surrounding gardens, or, for those on the upper levels, across the capital’s skyline (prices from £1,335,000). Residents also enjoy access to an extensive range of world-class private facilities, including a state-of-the-art Home Club which brings together the best of London’s favourite members’ clubs, health clubs, modern workspaces and leisure venues.

Jacob Sullivan, Director of Sales at Regal London, explains: “This is a long-established favourite for luxury London living. Its green, leafy village-like setting is coupled with easy access to the best of the capital’s schools, universities, designer shopping and cultural quarters. We’ve seen a lot of interest from UAE, Saudi Arabian and Kuwaiti buyers in these properties and our Kensington developments, mostly owner occupiers that are thinking about their lives and next home in a more long-term manner as a result of the pandemic. Not only do they want the trophy home in a world-class capital – they are also considering the quality of life it affords with a view to spending more time there, either as a main residence or pied-a-terre when in the country.”

In a prized setting, located next to the 410-acre Regent’s Park and overlooking the world-famous Lord’s Cricket Ground, One St John’s Wood has been designed by ‘starchitect’ Squire & Partners. The 112 apartments and penthouses feature the highest specification design and access to an exceptional suite of residents’ facilities including a spa and wellness centre, 20 m swimming pool, business and club lounges, cinema and roof terrace with views across the capital. Prices start from £995,000. 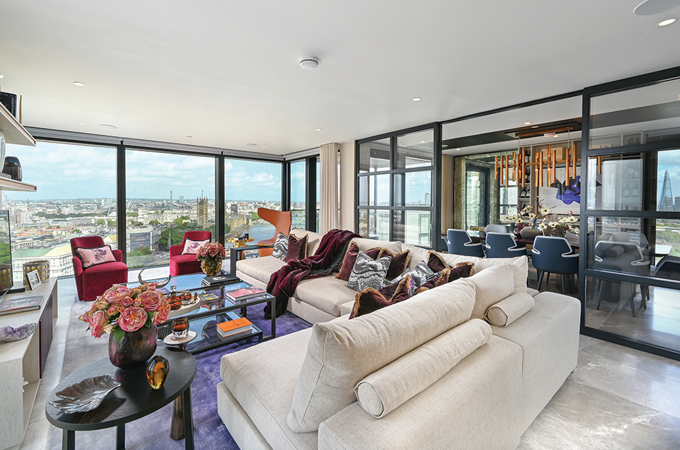 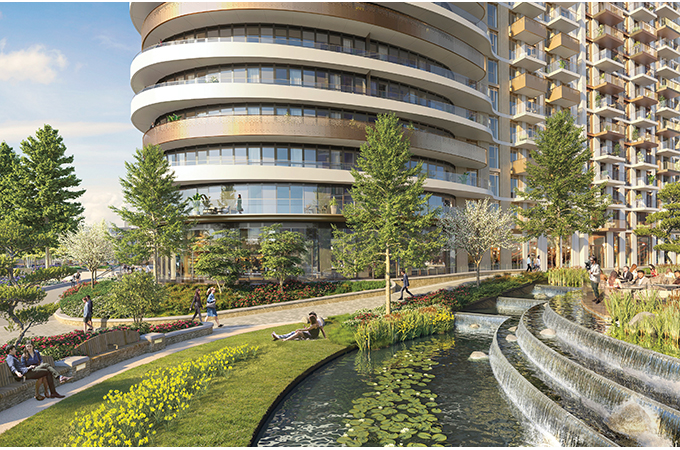 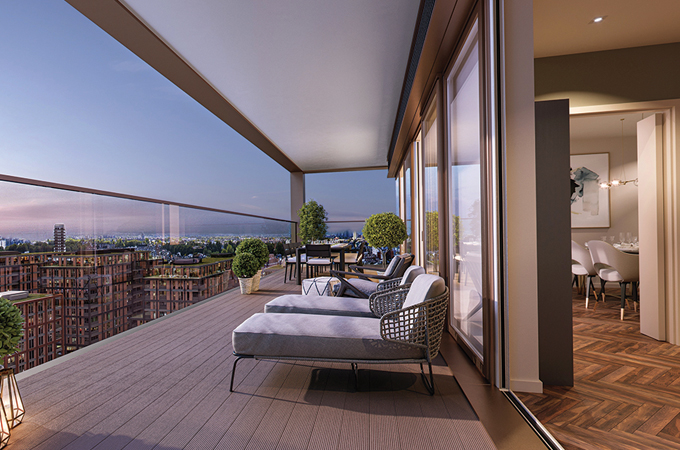 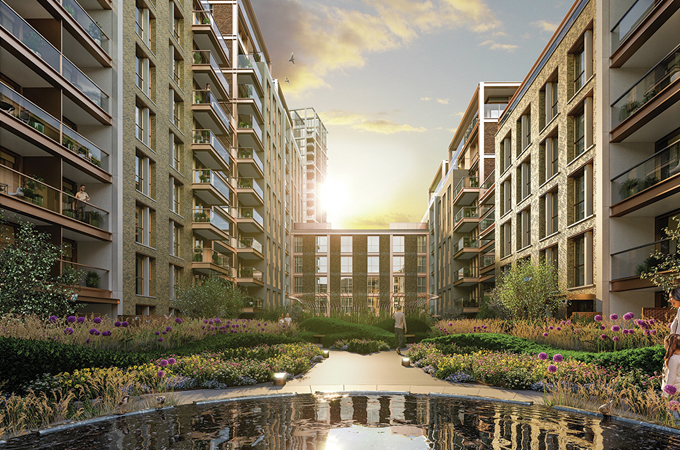 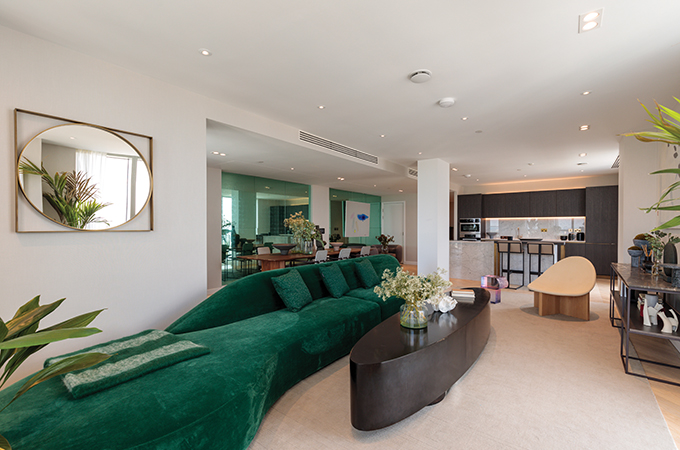 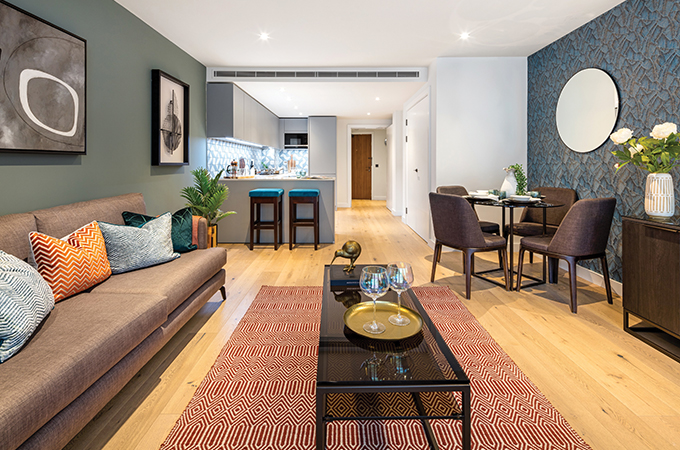 "
London is long considered a safe haven for investors and savvy buyers are now setting their sights on areas undergoing significant regeneration, where there’s opportunity for strong capital growth given the quality of new homes