Hollywood stars and haute cuisine are sending the prices of townhouses in New York City into the stratosphere, a new report shows.

The prices of homes in neighbourhoods bustling with celebrities and Michelin-starred restaurants have shot up more than 400 per cent in the last decade, the New York City Townhouse Report by luxury broker Leslie J Garfield reveals.

Their proximity to elite schools, art galleries and parks also play a role in pumping prices up, it added.

New York is one of the world’s largest celebrity hotspots and the power of the celebrity in pop culture is a powerful purchase motivator, the report said.

For example, homes on East 10th street in the East Village carry a premium of 67 per cent. It is also known to be one of the most densely celebrity populated streets in Manhattan, with Friends star David Schwimmer, Molly Ringwald, Mary Kate Olsen and Oliver Sarkozy residing there.

Similarly, in Central Village, the celebrity effect can be seen between 5th and University, which is the known home of Sex and the City star Sarah Jessica Parker, and Leonardo DiCaprio. Townhouses to exchange in these exact blocks now command a premium of over 43 per cent.

In Greenwich and West Village, where Taylor Swift made headlines after renting a $24.5 million townhouse in Cornelia Street, West Village, average values have jumped by $8 million, with average townhouse sale price now commanding $14.3 million, compared to $6.3 million in 2006, a growth of 127 per cent.

Blocks within close proximity to New York’s leading cultural highlights too carry a premium. Cited by buyers as one of the lead motivators behind a purchase, homes within walking distance, of no more than 10 minutes, to the city’s main galleries carry a premium up to 40 per cent. For example, 400-500 West 20th to 22nd Street in Chelsea is the home of over 10 different art galleries, including those of Tanya Bonkdar and David Zwirner, and carries a 40 per cent premium.

The growth in popularity of Chelsea, and the increased desirability of the area over the past ten years is evident through average sale prices, which saw a 139 per cent increase from $3.8 million to $9.1 million over the decade.

The outward spread of townhouse sales into areas like Brooklyn Heights can also, in part, be accredited to this effect.

Also commanding premium prices are blocks that are in close proximity to the Ivy League feeder schools such as those found on the Upper East Side and the Upper West Side, addresses within 5 minutes or less of green space or the waterside, and townhouses close to fine restaurants and bars.

Gramercy, the home of several Michelin-starred restaurants, is a prime example of this “Michelin effect”, the report says.

Jed Garfield, President at Leslie J Garfield, comments: “The 10-year study has allowed Leslie J Garfield & Co to pinpoint the individual townhouse factors that have increased the desirability of various areas, and essentially presents us with the blueprint for what makes a premium neighbourhood block. What is even more fascinating is how areas that encompass several of these desirability factors have seen meteoric rises in average sales prices. This is perhaps best demonstrated with Central Village a borough that boasts high profile celebrity neighbours, a strong cultural scene, and great restaurants, and has seen average sales prices soar from $3.9 million in 2006 up to $19.9 million, representing a remarkable 410 per cent growth.”

Garfield continues: “While the ‘ultra-prime’ traditional townhouse locations such as the Upper East Side and the Upper West Side are still highly desirable, the research shows that the rise in popularity of younger, less traditional neighbourhoods such as Central Village, Brooklyn Heights, and Greenwich Village has played a significant role in maintaining the buoyancy of the townhouse market.” 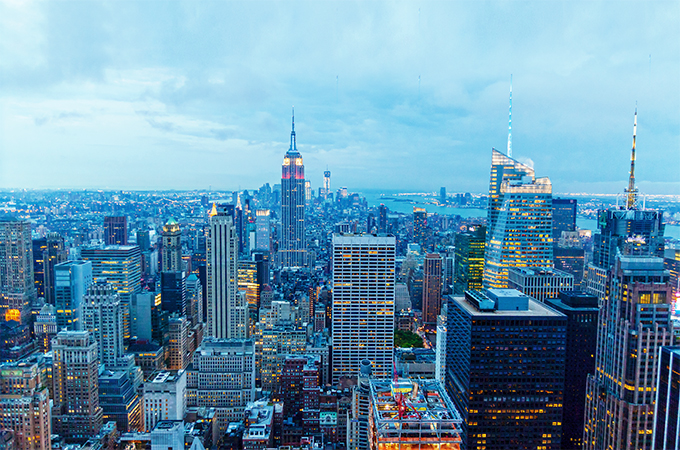 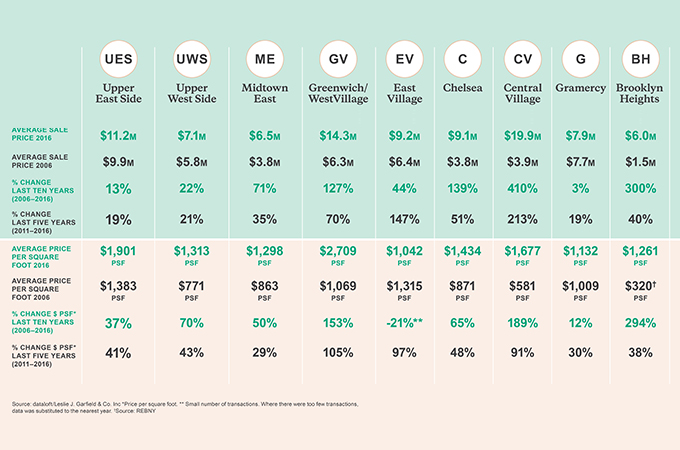