One of Patek Philippe’s most remarkable time-only watches ever made was on display in Dubai in October as part of Christie’s Watches Online: The Dubai Edit auction.

The sublime 18k yellow gold Patek Philippe ref. 2573 ‘Pearl of the Arabian Gulf’ of 1958, with a gilt dial and seed pearl hour markers between the cardinal indices, was the star of the timepieces with a Middle Eastern résonance that were displayed at the Dubai International Financial Centre (DIFC).

It has an 18k gold bracelet made exclusively for this watch by Gay Frères, purveyors of finest bracelet creations.

“This extraordinary Patek Philippe predates by only a few months the only other two ref. 2573’s ever made on special order with an identical architecture for the Amir of Bahrain. Both models in rose gold, which surfaced relatively recently were entrusted to Christie’s New York and Christie’s Geneva, respectively, fetching record prices. It is thus an extraordinary privilege for Christie’s Dubai to present the elder sister in yellow gold, the most glamorous of the three Pearls, at our special online sale,” said Remy Julia, Head of Watches Christie’s Middle East, India and Africa.

The watch (est. $100,000-$200,000) is one of the only three Patek Philippe Calatrava ref. 2573 to ever feature eight seed pearls as hour markers between the cardinal indices. Whereas the other two were made in rose gold, this one, in yellow gold, is all the more stunning for the solid yellow gold bracelet created especially for this watch by Gay Frères. Manufactured in 1958, its case and movement numbers indicate it was also the very first of the three special commissions to be manufactured, preceding the two rose gold models by a few months at most.

For decades, only one thing was certain: at least one ref. 2573 with seed pearls marking the hours between the cardinal indices was known to have been made; it was the image published by Patek Philippe as a “Creation 1959” which led to giving the legend a name: Pearl of Bahrain.

In 2015, Christie’s New York sold a Patek Philippe with seed pearl hour markers, a time-only Calatrava ref. 2573 in rose gold, manufactured in 1958; for the first time, a Pearl of Bahrain was offered at auction. The consignor, an American businessman with an extensive career in the Middle East had received it as a gift from Amir Salman bin Hamad Al Khalifa, to whom he had served as an advisor. Estimated at $10,000 to $15,000, the watch sold for the staggering sum of US$437,000.

The present Patek Philippe Calatrava ref. 2573 Christie’s Dubai is offering at its open for bidding auction until October 26 is the only known example in yellow gold and stands out as one of the most compelling and important time-only Patek Philippe wristwatches to be offered at auction in recent years. Although it predates the two rose gold Pearl of Bahrain watches in existence, its provenance as having also been commissioned by the Amir of Bahrain cannot be determined with absolute certainty, says Christie’s. 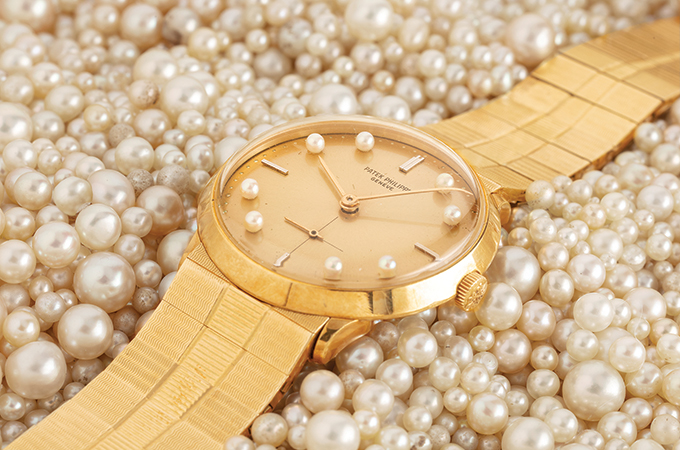