Major aviation players are expected to take part in the Bahrain International Air Show (BIAS), which will return next year.

The sixth edition of Bahrain’s premier aviation show, which was cancelled due to the Covid-19 pandemic last year, will now be held from November 9 to 11, 2022 at the Sakhir Airbase under the patronage of Bahrain’s His Majesty King Hamad.

“There are indications that BIAS 2022 will witness a large participation of the latest civil and military aircraft and flying vehicles,” said His Majesty the King’s Personal Representative and BIAS High Organising Committee chairman Shaikh Abdulla bin Hamad Al Khalifa, announcing the show dates.

He added that some of the best aerobatics demonstration teams will take part for the first time in the upcoming exhibition.

Bahrain hopes to benefit from the mega event to create a value-added work environment by attracting major civil and military aviation manufacturing firms, he said.

He commended the government, chaired by His Royal Highness Prince Salman bin Hamad Al Khalifa, Crown Prince and Prime Minister, for supporting the exhibition, hailing the co-operation of ministries and other agencies which has ensured the success of the show since its inception.

Shaikh Abdulla also underlined the importance of the show in promoting Bahrain as an investment destination and business friendly hub, noting its role in revitalising the national economy and purveying jobs.

The biennial show is organised by the Transportation and Telecommunications Ministry and the Royal Bahraini Air Force in association with Farnborough International.

The mega event will also feature an international military forum organised by the Royal Bahraini Air Force at the level of the Chiefs of Staff, in addition to entertainment programmes for families, individuals and young people in an area specially designated for the general public. 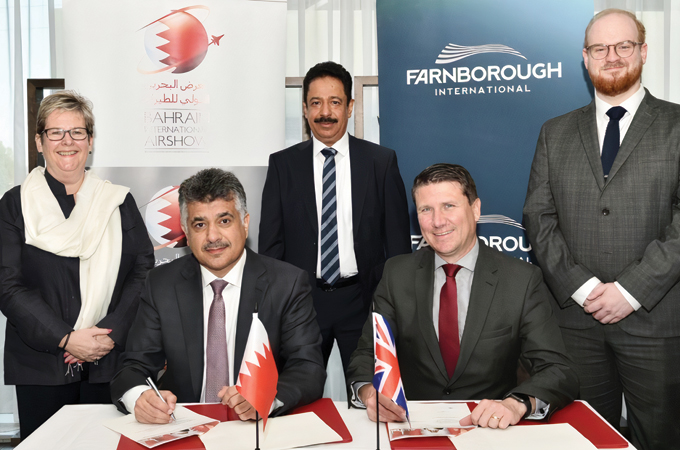