Mercedes-Benz today launched its new S-Class car, shaping the next generation of individual mobility with innovations that place the focus on people.

The S-Class stands for the fascination of Mercedes-Benz: legendary and traditional engineering expertise which defines the luxury segment in the automobile industry.

The new S-Class can be experienced with all the senses – seeing, feeling, hearing and smelling – while offering numerous innovations in the areas of driver assistance, protection and interaction.

The new S-Class uses digitisation for a car that responds empathetically to the needs and wishes of its driver and passengers, says the automaker.

"The S-Class is the world's best-selling luxury sedan. With the latest generation we want to offer our customers innovation, safety, comfort and quality as never before," says Ola Källenius, Chairman of Daimler AG and Mercedes-Benz AG.

"The new S-Class underpins our claim to produce the best automobile in the world", states Markus Schäfer, Member of the Board of Management of Daimler AG and Mercedes-Benz AG; responsible for Daimler Group Research and Mercedes-Benz Cars COO. "This is where covetable luxury meets the greatest possible safety and highest level of comfort."

The market launch in the Middle East will commence in January 2021.

Modern luxury attains the next level in the interior of the S-Class. The designers have created a feel-good ambience with lounge character marked by elegance, high quality and lightness. The dashboard with its new architecture, modern surface design and ergonomic display arrangement is a particular highlight. But the feel-good aspect goes even deeper: with high ride quality and low noise levels as well as an extensive range of Energizing Comfort programmes, the S-Class looks after the well-being of its passengers. They also stay fit thanks to the effective air filtering system, which signals its newly gained capability with the new name Energizing Air Control.

The new Mercedes-Benz S-Class has become more intelligent in many areas, and the driving experience is at the next level. Digital innovations such as in MBUX (Mercedes-Benz User Experience) are joined by innovations that increase driving enjoyment while making driving even safer: among them are rear-axle steering with a large steering angle and safety innovations such as the rear airbag. As a new function of PRE-SAFE® Impulse Side, the active E-Active Body Control suspension can raise the vehicle body (on both sides) just before an impending side impact. Following systematic further development, the driving assistance systems are a further step towards autonomous driving. Thanks to improved environmental sensors, for example, the parking systems give the driver even better support when manoeuvring at low speed. The integration into MBUX means that the level of visualisation has now entered a whole new dimension.

• The turning circle is reduced by up to 1.9 m with rear-axle steering compared to a model without it. The maximum steering angle is 10°.

• 10 different massage programmes are available in the new S-Class.

• The display area of the augmented reality head-up display corresponds to a monitor with a diagonal of 77 inches.

• With a Cd figure from 0.22, the S-Class is one of the world's most aerodynamic cars. Its drag coefficient is therefore lower than before, despite a larger frontal area 200 sq cm.

• The resolution of DIGITAL LIGHT per vehicle is over 2.6 million pixels.

• The computing power of MBUX (Mercedes-Benz User Experience) has increased by 50 percent compared to the system in the previous model. The memory bandwidth is 41,790 MB/s.

• When a side impact threatens, the vehicle body can be raised by up to 8 cm by the E-Active Body Control suspension (optional) within a few tenths of a second. This is a new function of Pre-Safe Impulse Side.

• 17 step motors control the temperature and air distribution in the THERMOTRONIC system. The 4-zone climate control THERMOTRONIC Rear (optional) even has 20 step motors. These electric motors operate the air flaps.

• In the Active Ambience Lighting system (optional), there is an LED in an optical fibre every 1.6 cm. There are around 250 in all.

• The tubular structure of the innovative rear airbag is around 16 litres, while the total volume of the deployed bag is up to 70 litres.

• The control units of E-ACTIVE BODY CONTROL analyse the driving situation and adjust the suspension 1000 times per second.

• More than 98 kg of components made from resource-conserving materials are used in the S-Class. The number of components containing recyclates is now 120 – more than twice as many as in the preceding model. Another 40 kg or so are made from renewable raw materials.

The S-Class combines artificial intelligence with the experience gained from 135 years of automobile engineering. Around 70 years ago, Mercedes-Benz laid the foundations for this model series with the model 220. Since its market launch in 1951, more than 4 million S-Class Sedans have been delivered to customers around the world. The designation "S-Class" was officially introduced with the 116 series in 1972. In the last 10 years the S-Class Sedan has been particularly popular in China, the USA, South Korea and Germany. All in all, since the launch of the generation that is now in its runout phase, more than 500,000 S-Class Sedans have been sold.

The loyalty rate for this model series is especially high. For example, in the region, more than 80% of customers who previously drove an S-Class once again opted for a Mercedes-Benz model. Around the world the S-Class Sedan is predominantly sold in the long wheelbase version: Around 9 out of 10 customers opt for the long version of the S-Class Sedan, which is standard in the region.

The S-Class has always been a place for comfortable travel and relaxed working. With the new generation, the interior has fully evolved into a "third place", a refuge between the home and workplace. Nearly all comfort-related dimensions of both variants, the S-Class with short and long wheelbase, have been improved in the front as well as on the rear seats. The sense of space is accordingly generous.

The desired harmony between digital and analogue luxury results in a revolutionary interior design, including associations with interior architecture and yacht design elements. The sculptured look of the dashboard, centre console and armrests appears to float above an expansive interior landscape. The systematic reduction in the number of controls underscores the minimalist appearance of the interior. A fine divide between the upper section of the dashboard and the large trim element structures the area and creates horizontal breadth.

The seats literally invite the occupants to sit down and relax. The flowing, three-dimensional layer design theme gives an impression of lightness. Different finishes give the seats different characters. For example, the flowing longitudinal piping of Lugano leather lends them a noble, avantgarde look, while the progressive diamond pattern of nappa leather and Exclusive nappa leather is more classical and expressive.

Up to 19 motors in the front seats make for comfortable seating – a number that indicates the complexity of the technology installed in the seats. Yet comfort is not enough: the seats also play a major part where safety is concerned. And of course, when it comes to luxurious wellbeing, all the seats available for the S-Class carry the seal of approval by the Healthy Seating campaign .

Ten different massage programmes are available in the new S-Class. These use the vibration motors and can enhance the effect of a relaxing massage with warmth on the hot-stone principle. To this end, the seat heating is combined with the inflatable air chambers in the active multicontour seats. The air chambers are now closer to the seat surface and are therefore even easier to control and feel.

In the new S-Class, Mercedes-Benz comes another big step closer to its vision of accident-free driving. The driver is supported by numerous new or extended driving assistance systems. He/she thereby has a reduced workload in day-to-day situations, and is able to drive comfortably and safely. When danger threatens, the assistance systems are able to respond to impending collisions as the situation demands. The operating principle of the systems is made visible by a new display concept in the driver display.

Thanks to improved environmental sensors, the parking systems give the driver even better support when manoeuvring at low speed. Operation is faster and more intuitive thanks to integration into MBUX. The optional rear-axle steering is integrated into the parking assistants, with the calculation of trajectories adapted accordingly. Emergency braking functions serve to protect other road users, too.

With a short front overhang, a long wheelbase and a balanced rear overhang, the S-Class is designed as a classical sedan with perfect proportions. The wide track and flush-mounted wheels with modern designs give the vehicle a muscular look. The so-called character lines have been greatly reduced along the sides. Cleverly contoured surfaces with a sculptured look create special light effects. The front section impresses with its high-status radiator grille.

The headlamps characterise the front aspect of the car. They have the three-point daytime driving light signature that is typical of the S-Class, but this is flatter and somewhat smaller overall. The flush-mounted door handles are a completely new development. They are electrically extended when the driver approaches, or the outer surface of the door handle is stroked.

The dynamic appearance of the car is continued at the rear. Thanks to precisely designed, highly detailed interior features and certain animated functions, the rear lights contribute to the impression of high quality. They make the new S-Class unmistakable in both their day and night design.

Six-cylinder in-line petrol engines in various output classes are the first engine variants for the new S-Class. A V8 engine with an integrated starter-generator (ISG) and 48-volt onboard electrical system will be available soon after. 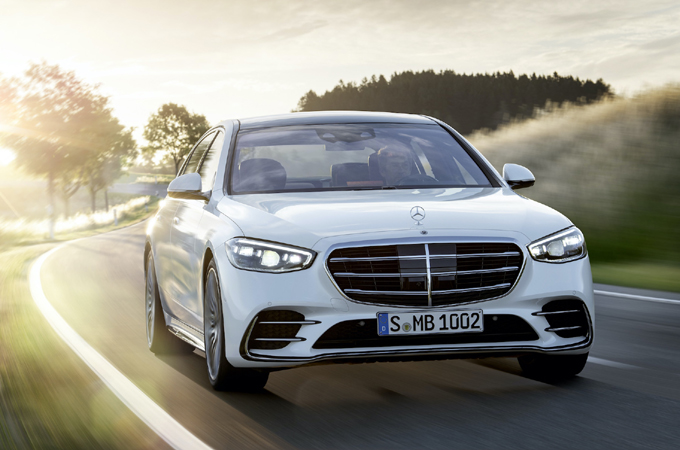 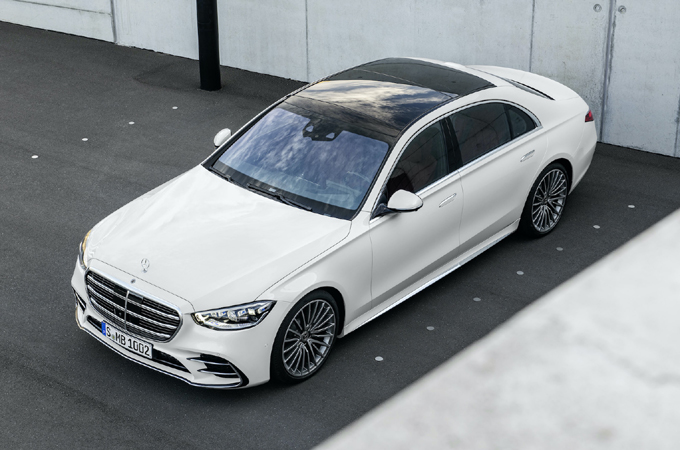 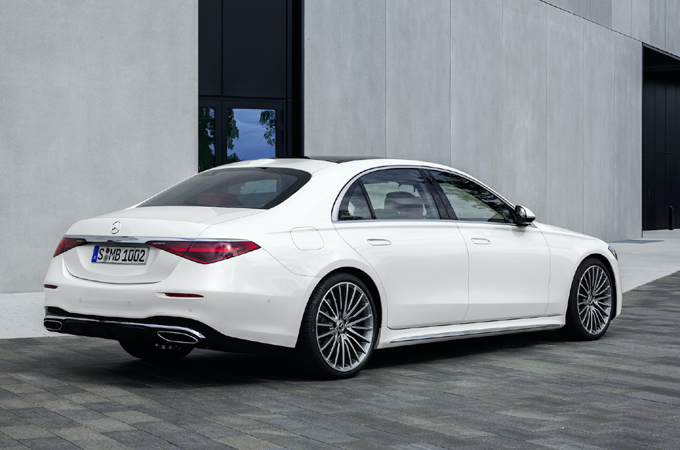 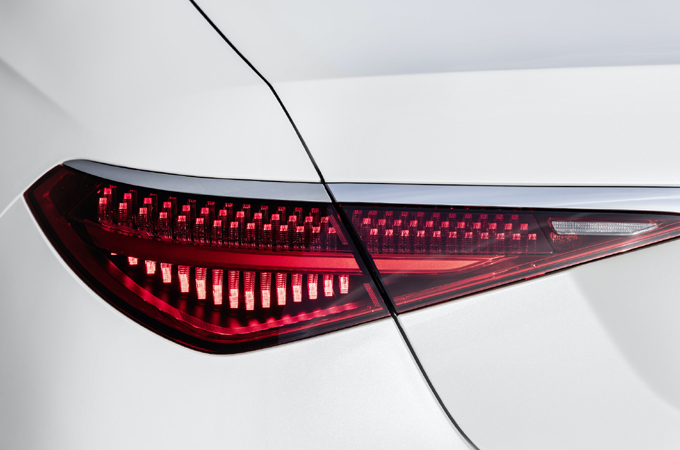 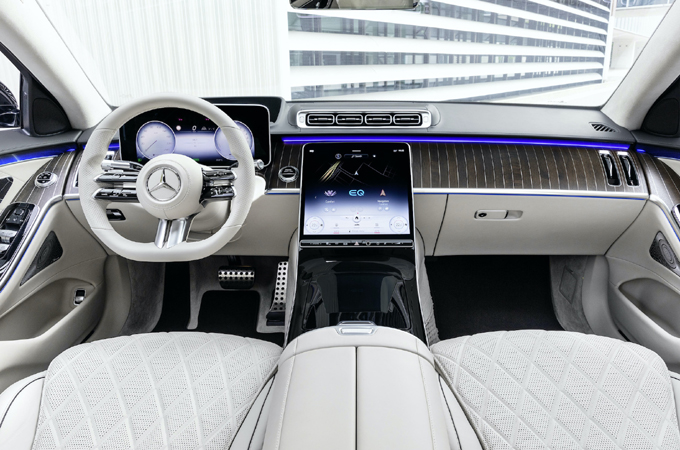 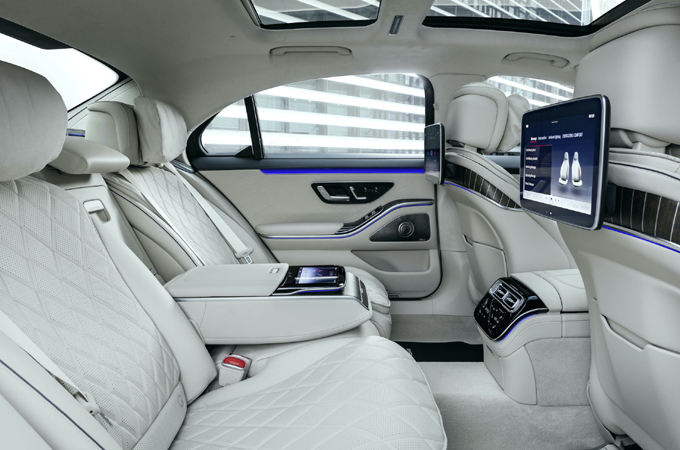