Lifestyle
Chopard to the fore at Mille Miglia

Swiss watch and jewellery house Chopard marked its 28th year at the 2015 Mille Miglia, which saw 436 cars compete in the historic 1,000-mile race in Italy, and a 1927 Bugatti drive off with the winner’s tropy.

In 1988, Chopard supported the famous Mille Miglia race for the first time and launched the Chopard Mille Miglia collection the same year. Since then the Scheufele family has participated every year in the three-day 1,000-mile race from Brescia to Rome and back.

This year, 436 cars took off from the ramp on Viale Venezia in Brescia. The cars constructed between 1927 and 1957 belonging to 61 different brands, are of inestimable value and they challenged each other along an ancient and picturesque route, which is preciasely a thousand miles long.

Chopard, as World Sponsor and Official Timekeeper, has been a long standing and loyal partner of “la corsa pìu bella del mondo” - the world’s most beautiful race and this year Chopard Co-President Karl-Friedrich Scheufele, drove a Porsche 550A Spyder RS alongside his wife Christine.

Now in its 33nd edition, "the most beautiful race in the world” started under a sunny sky. The 436 cars and their crews took off from Viale Venezia in Brescia on May 15 at 2.30 pm.

The next three days, they passed through more than 30 cities and towns among Verona, Rimini, San Marino, Roma, Siena, Pisa and Parma before heading back to the starting point, the historical ramp on Viale Venezia, in the heart of Brescia. Enthusiastic locals and guests bid the drivers farewell during the first kilometres of the race, thousands of spectators lined the streets of the route and shouted out encouragement to the drivers.

Mille Miglia is always a rendezvous for car enthusiasts from all over the world welcoming each year new nationalities and this year, drivers from over 40 different nationalities campaigned for victory.

This year again, Scheufele chose to honour Chopard’s partnership with Porsche Motorsport by co-driving with his wife Christine in a Porsche 550A Spyder RS, on loan from the Porsche Museum: a 1956 car which made its mark in the history of motorsport.

Albert Carreras, son of the famous tenor José Carreras and friend of Chopard, drove the race with his co-pilot Jordi Pascual in a Mercedes Benz 300 SL, owned by the Scheufele family.

Other famous drivers included like top models David Gandy and Jodie Kidd, Andrea Zagato with his wife Marella Rivolta as well as the legendary pilots Jochen Mass and Hans Herrmann.

Ahead of the race, on May 13, Chopard hosted a welcome dinner for 120 guests in the Palazzo della Loggia in the heart of Brescia, an historic sixteenth-century Italian palace and the next day guests and drivers met at the Chopard Racing Club located in the Vittoria hotel.

To commemorate the event, Chopard as usual unveiled out a special watch - Mille Miglia 2015 Race Edition -  whih is said to reinvent the classic racing spirit

Issued in limited series of 1,000 in steel and 100 in rose gold respectively, the Mille Miglia 2015 Race Edition picks up the design codes of the classic cars that took part in the Italian race between 1940 and 1957.

On the dial, a powerful shade of red reigns supreme.

This “Rosso Corsa” is one of the famous “racing colours”, the colour codes for cars that served to identify competitors’ nationality from the early 20th century through to the late 1960s. This emblematic red was chosen as the competition colour of an entire nation: Italy.

The captivating watch face with its black and white touches recalls the new Mille Miglia GTS watches presented by Chopard at Baselworld 2015. The power-reserve indicator is reminiscent of typical 1950s petrol gauges, while the oversized 6 and 12 o’clock Arabic numerals echo the dashboards of vintage cars.

In a nod to the participant numbers placed on the doors and bonnet of the competing vehicles, the date window appears clearly on a white background in the Mille Miglia red arrow-shaped logo.

The faceted hands and the hour-markers are painted with a luminescent coating and enhance the readability as well as the sporting character of this timepiece.

The edition comes in a sturdy 43 mm-diameter case in 18-carat rose gold or steel, topped by a bezel with a black aluminium graduated insert.

Its short, streamlined lugs have been designed to perfectly mould the curve of the wrist, ensuring optimal comfort and style further enhanced by the black Barenia leather calfskin strap secured by an 18-karat rose gold or steel folding clasp.

The screw-down back guaranteeing water resistance to 100 m is engraved with the inscriptions “Mille Miglia” and “Brescia > Rome > Brescia” and fitted with a transparent sapphire crystal pane revealing the Chopard movement and its openworked oscillating weight.

The Mille Miglia 2015 Race Edition is equipped with Chopard Calibre 01.08-C, entirely developed, designed and assembled in the Chopard’s Fleurier Ebauches workshops. Chronometer-certified by the Swiss Official Chronometer Testing Institute (COSC), this mechanical self-winding movement ensures extreme precision in driving the hours, minutes and seconds indications, as well as a date appearing at 3 o’clock and a power-reserve display at 9 o’clock. Endowed with a generous 60-hour power reserve, the Mille Miglia 2015 Race Edition embodies the exclusive spirit of the race with its blend of Italian elegance and sporting prowess. 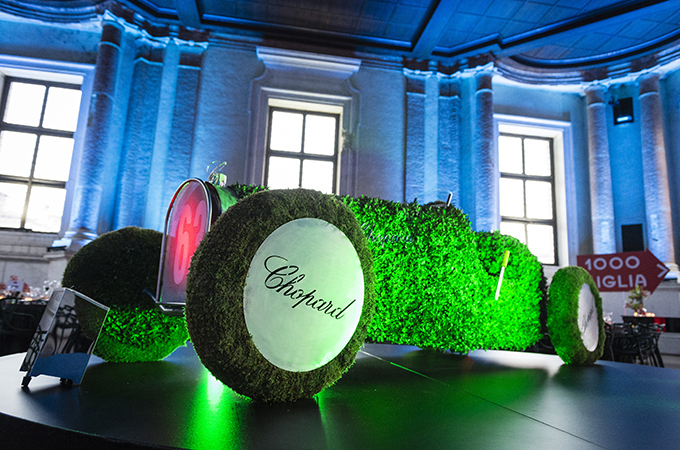 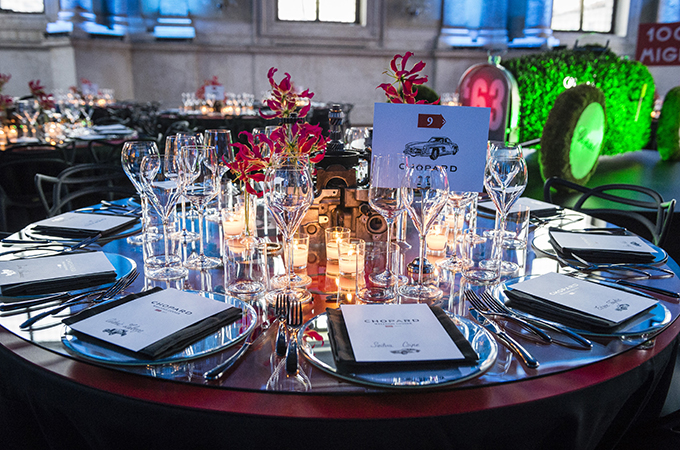 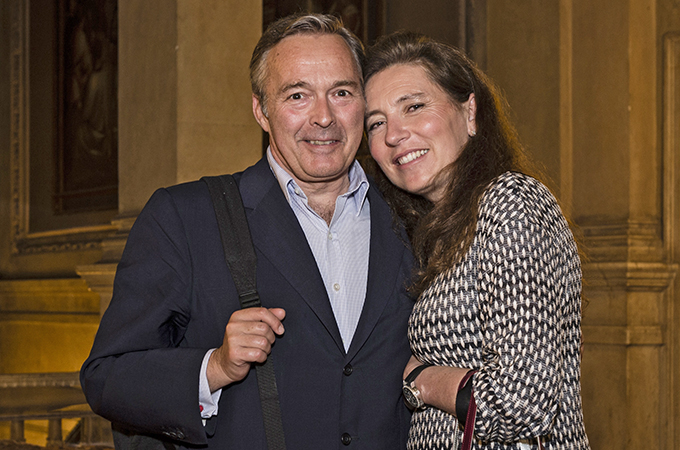 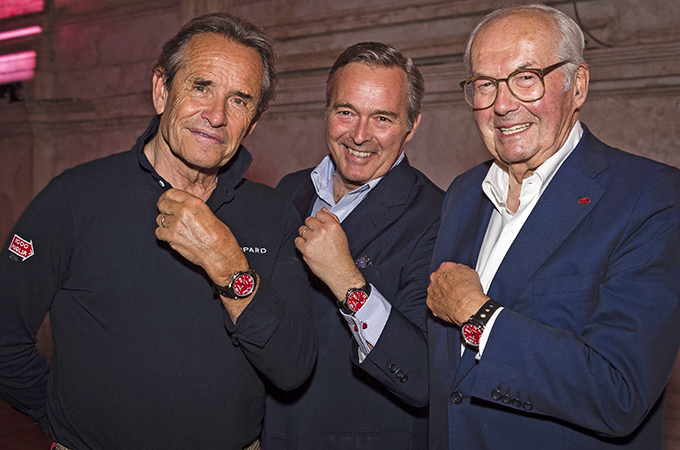 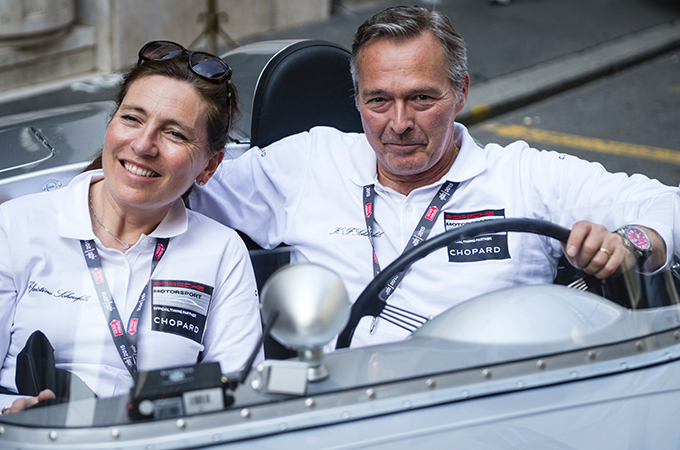 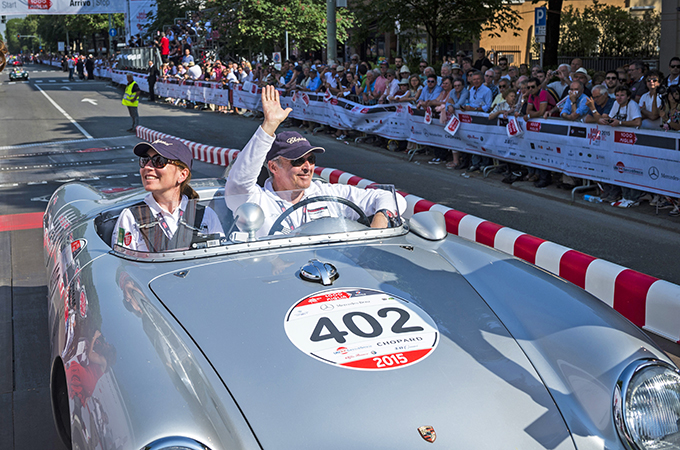 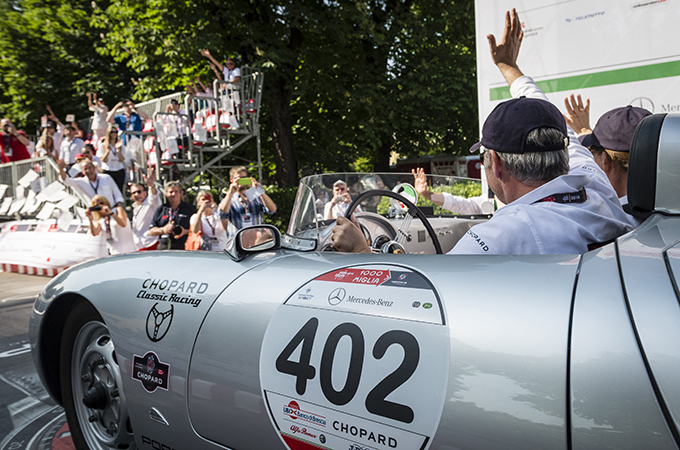 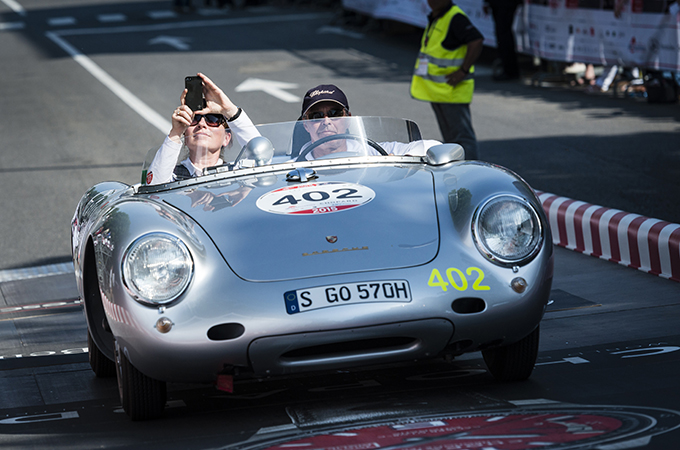 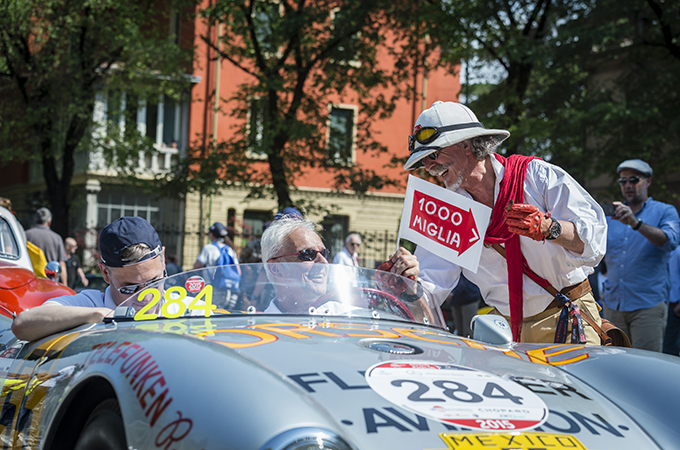 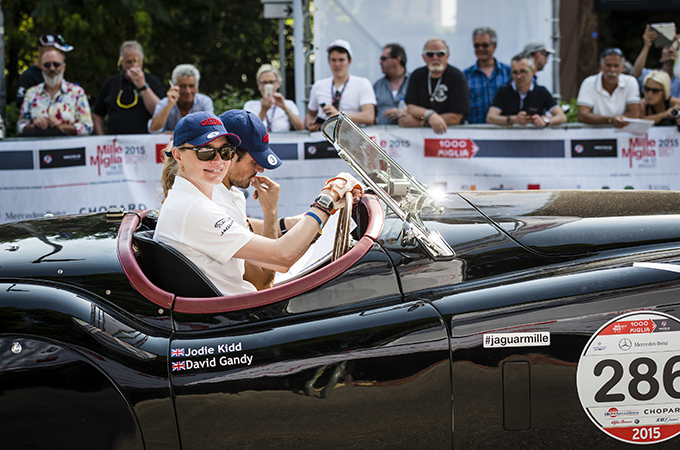 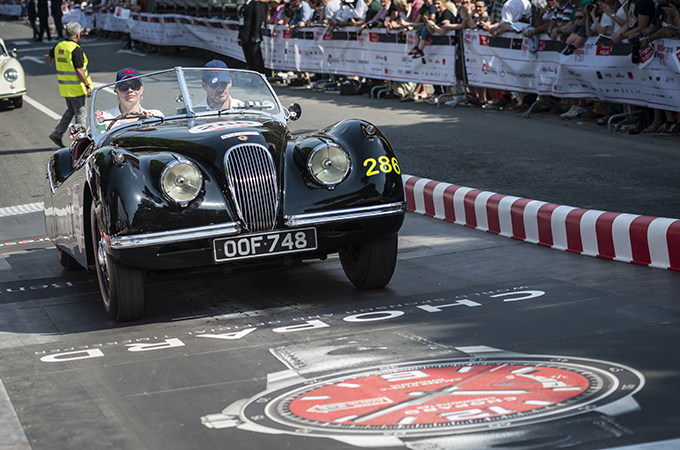 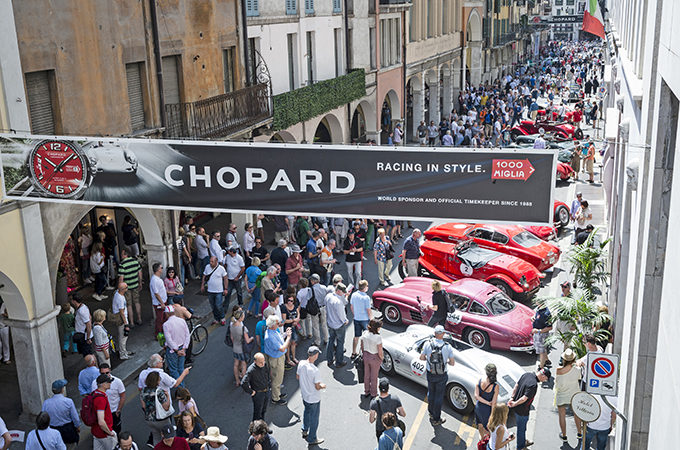 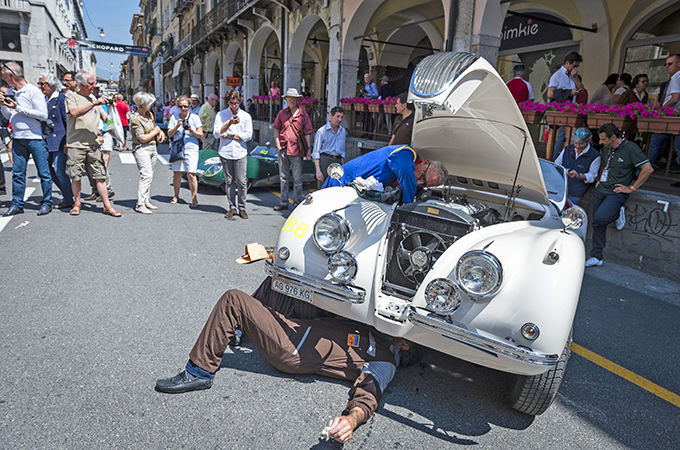 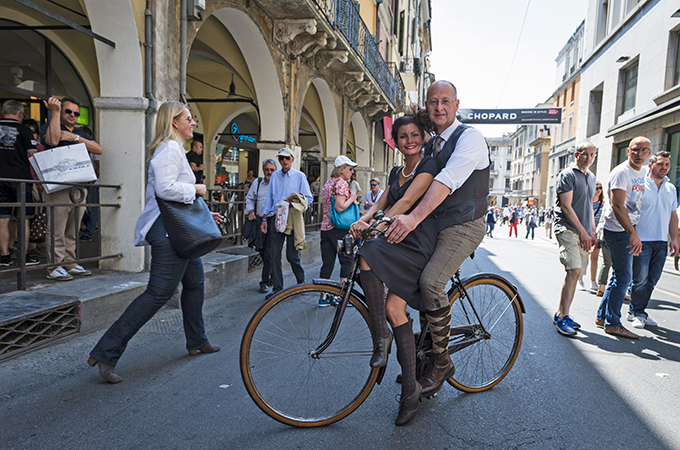 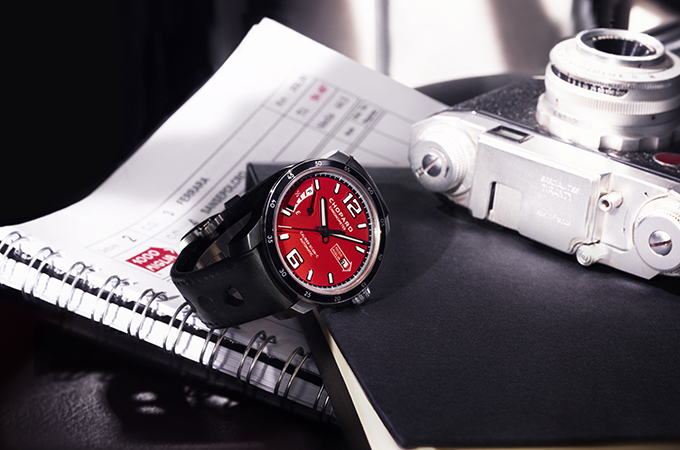 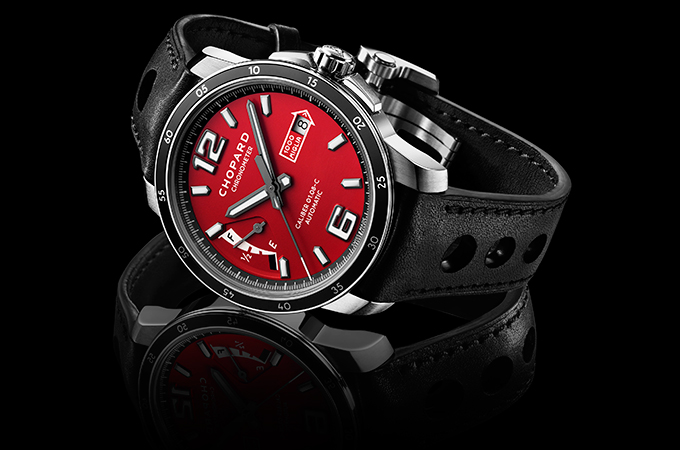