Inspired by the creation of the Signature printed canvas by Kris Van Assche and this season’s Globe-Trotter luggage collaboration, Berluti has developed a beach buggy that pays homage to the rebellious and carefree lifestyle of 1960’s Southern California.

Invented in 1964 by Bruce F Meyers in Newport Beach, the original Meyers Manx was created to scour the local dunes and beaches in search for the perfect surf spot. Sold as a kit car and featuring an open-wheeled fiberglass bodyshell coupled with a Volkswagen Beetle flat-four air-cooled engine – often personalised to suit the tastes of each particular owner, it soon became a staple for unforgettable stunts in movies including Elvis Presley’s Live a Little, Love a Little and The Thomas Crown Affair. With the auction of the Meyers Manx driven by Steve McQueen in the 1968 film last March by Bonhams and the introduction of a new electric model by Volkswagen in the latest Geneva International Motor Show, the Buggy is undeniably back in style, as iconic and timeless as Berluti’s classics.

True to the original Meyers Manx, Berluti’s Buggy blends technical simplicity and artisanal know-how. Using a Volkswagen Beetle frame and motor, and a polyester shell reproducing the initial mould, the resulting vehicle is, at around 500 kg, exceptionally light. An air-cooled flat-four engine with 1600 cc, twin carburettor, and 90 HP are topped off with a rollover protection structure that doubles as a surfboard stand, making it the perfect off-roader.

Berluti’s distinctive touches are all-present, with a bespoke choice of leathers and patinas: the dashboard, steering wheel, gear lever and the two seats (handcrafted in Epernay, France, by Sellerie Duval) are covered in leather and complete with a Berluti logo and understated B on the wheel. Further bespoke details include a Signature print canvas soft-top, a removable luggage carrier encased in black leather and a palladium-finished brass Berluti logo on the hood.

Berluti was established in Paris in 1895 and has been built by four generations of shoemakers. In 2005, fine leather goods were introduced and, in 2011, a complete clothing collection. A unique bespoke service from head to toe is now available through Berluti’s workshops in rue Marbeuf and rue de Sèvres. Berluti now has over 50 stores worldwide. 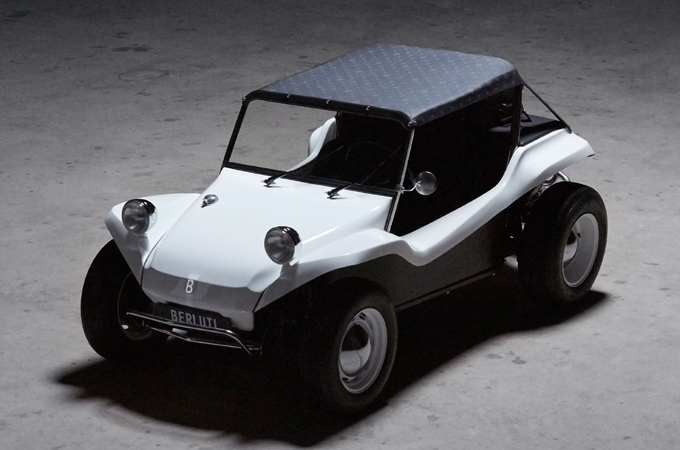 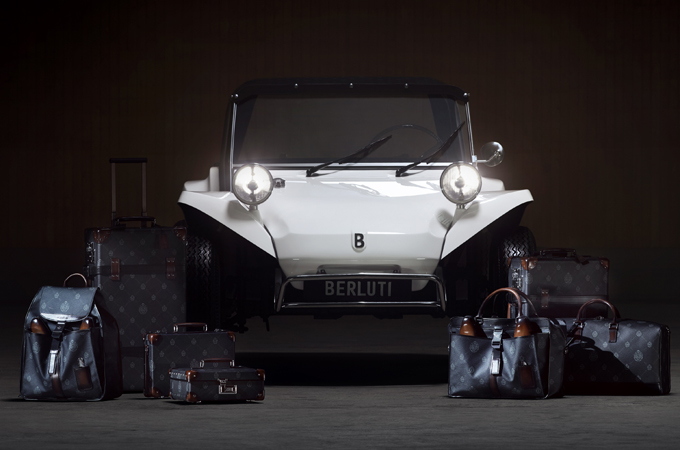