Bahrain’s Grand Prix set new records for attendance, as motor sports enthusiasts spoke of the exciting race and festive atmosphere at the race which was won by British driver Lewis Hamilton.

As many as 32 spectators turned out yesterday for the Gulf Air Formula One Grand Prix while a total of 90,000 visitors flocked to the Bahrain International Circuit (BIC), where the race was held, over the course of the three-day event.

For the second year in succession, the race was held at night.

Race-goers flooded the BIC in anticipation of a race many thought would be dominated by the Mercedes rivalry between Hamilton and Nico Rosenberg.

Hamilton won the race, having led for the majority of the 57 laps, with Ferrari's Kimi Raikkonen coming in second and Rosenberg third.

BIC Chairman Shaikh Salman bin Isa Al Khalifa said: “The 2015 Bahrain Grand Prix yet again reaffirms the fact that the night race is attracting a new breed of fans to F1 in Bahrain. I am especially encouraged by the increase in the number of fans from outside of the region who have come to enjoy our Bahraini hospitality.

“I thank the team here at the BIC for their phenomenal efforts in delivering yet another wonderful weekend of racing and entertainment and I also thank our partners and sponsors for their continued support.”

Spectators were all praise for event, according to the Gulf Daily News (GDN), Arabian Knight’s sister publication.

British sisters Jenny, 19, and Rachel, 26, flew in from the UK with their parents to attend the race.

"I've never been to a Grand Prix before," Jenny told the GDN. "We're from England and we flew here for the race. We're staying longer though to see the country. We're here for 11 days and we want to see all the archaeological sites around Bahrain. The atmosphere here has been amazing, especially when Hamilton won."

Her sister is a rally driver who often attends motorsport events.

"I've had a fantastic time," said Rachel. "I go to a lot of motorsport and I'm a rally driver, but this is a different level, it's very lavish. Especially here in Bahrain, things like the entertainment and activities make a big difference, so it's been amazing. I love all motorsport, so coming here was a lifetime opportunity I couldn't turn down."

Another spectator, 31-year-old Fatima, said she looked forward to the off track activities every year.

"This year's race has been great. I like the Formula One but the real reason I come is gathering of people," she said. "I've come every year in the past 11 years, except for one, and this is the best year yet. There have been more food options, better activities and great entertainment."

German national Mario, 34, said he came over from Saudi to witness the race. "I'm a technical adviser in Saudi and I came over for the Formula," he said.

"It's a really nice atmosphere here. I've been to two Grands Prix in Germany and it's a similar vibe, very good. This is a nice circuit, everything looks so good. I support Vettel so I'm disappointed that he started second and finished fifth, but it was an interesting race. The night race is also much better than the day ones."

Bahraini Abdullah, 23, said he'd been converted to Formula One following the weekend.

"This is my first time attending the Formula One and I love the sport as a result, and have now become a fan to the level that I was watching the race anxiously," he told the GDN. "I wanted Vettel to win so I'm a little disappointed, but it was a great race.

“The organisation of the race and all the entertainment alongside it has been fantastic, and it makes you proud to be a Bahraini.”

Alongside the race, Bahrain’s Grand Prix featured a wealth of entertainment for spectators including a snow village, trapeze artists, stilt walkers, and game zone simulators.

The 2015 FIA Formula One World Championship now heads to Barcelona for round five from May 8 to 10. 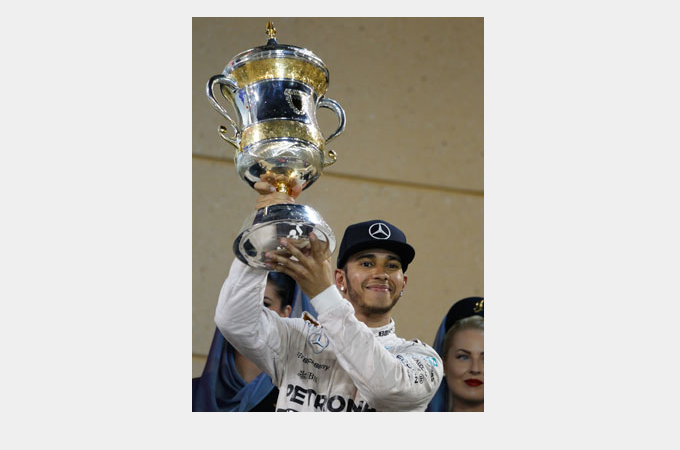