The Mercedes superstar made it a perfect four poles in four rounds this season, sending out a stern warning to his chief rivals that he remains the man to beat. Hamilton clocked his fastest time of 1min 32.571 secs on the final lap of a windy qualifying session at a floodlit Bahrain International Circuit (BIC).

The Briton will be joined by Ferrari’s Sebastian Vettel on the front row of the starting grid. Vettel qualified with a best lap of 1min 32.982 secs.

Nico Rosberg will start the Bahrain Grand Prix right behind his teammate in third position, alongside Kimi Raikkonen, thus completing an exciting mix of Mercedes and Ferrari challengers on the front two rows.

“My laps were pretty good; I can always improve, but I’m really grateful,” Hamilton said during the post-qualifying Press conference.

“[Ferrari] will be very hard to beat tomorrow. Hopefully with our positioning, hopefully it helps.”

Vettel commented: “I am very happy with second today. With a tough session, in the beginning I didn’t really find the rhythm I had during the practices. But towards the end, more and more getting a better feeling.

“Now, I’m very happy with the car and tomorrow, hopefully have a good start and have a good race from there.”

Rosberg expressed his disappointment in missing out on securing the number one grid position for the third year in a row at BIC. “Just strategy-wise, I got it wrong; I was thinking too much about the race and I’m disappointed because Sebastian beat me,” he said.

Williams teammates Valtteri Bottas and Felipe Massa locked up the third row of the grid, while starting behind them will be Red Bull Racing’s Daniel Ricciardo and Force India’s Nico Hulkenberg.

The 57-lap Bahrain Grand Prix is scheduled to flag off today at 6 pm.

Meanwhile, Stoffel Vandoorne and Bandar Alesayi were each victorious yesterday in their respective championships being held in support of the Bahrain Grand Prix.

Vandoorne picked up a pole-to-flag victory in the GP2 Series feature race, which kicked off their 2015 season. Alesayi, on the other hand, made the most of his opportunity to claim a fine victory in the first race of the final round in the Porsche GT3 Cup Challenge Middle East. 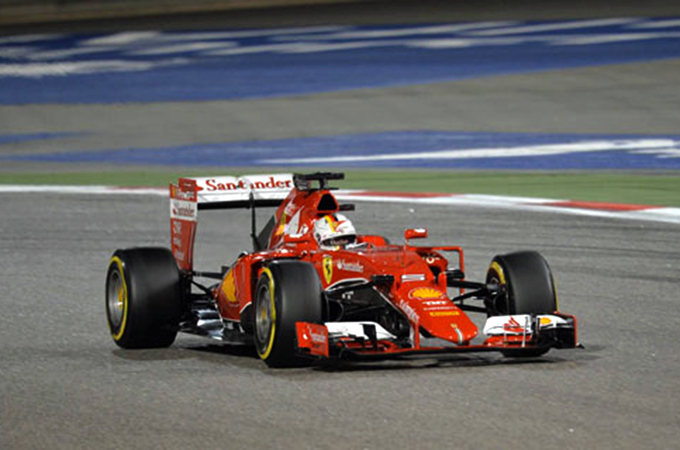