A stunning sculptured piano – which will be one of only seven in the world – has been sold by Cambridge-based piano makers, Edelweiss, for £275,000.

The magnificent Le Silex piano looks more like a work of art than a musical instrument. Inspired by the beauty of the natural world, the piano is designed to look as if struck from a huge chunk of flint and weathered by Mother Nature (Le Silex means ‘flint’).

There are three customisable finishes: Black Diamond, Flint and Verdigris; each one taking six months to make by a team of 15 designers and artisans.

Just one in a billion people will own one of the new Le Silex, the latest design from world-renowned Cambridge craftsmen Edelweiss Pianos.

Created with the help of professional sculptor Gareth Knowles – known for his monumental pieces for Arabian royalty, legendary film directors and The National Trust – Edelweiss’s newest additions are made to order and cast from a meticulously hand-sculpted, life-sized clay render.

“These pianos are about more than just music,” says Mark Norman from Edelweiss, whose incredible instruments are the only piano brand sold through Harrods, and bought by famous names. Claudia Schiffer has an orange, upright Edelweiss piano in her bedroom.

“They are sculptural art forms that look as if struck by lightning and weathered by the elements over several millennia. We were inspired by the primeval magic and texture of flint.

Particularly the stunning contrast between grainy, opaque quartz and the dark, mysterious interior. This led to us exploring other natural materials such as carbon, precious metals and alloys. In fact, almost any finish is possible.”

Each design will be built to the customer’s specification – from the exact undulation and weathering of the liquid metal to the hand-painted texture and tactile finish of glossy flint or gleaming copper.

Like all the sought-after pianos built by the Cambridge piano company, the digital, self-playing Le Silex fuses music and magic in one super-modern work of art thanks to a hidden iPod, which is pre-programmed with 400 songs and an invisible bank of precision electronic solenoids. 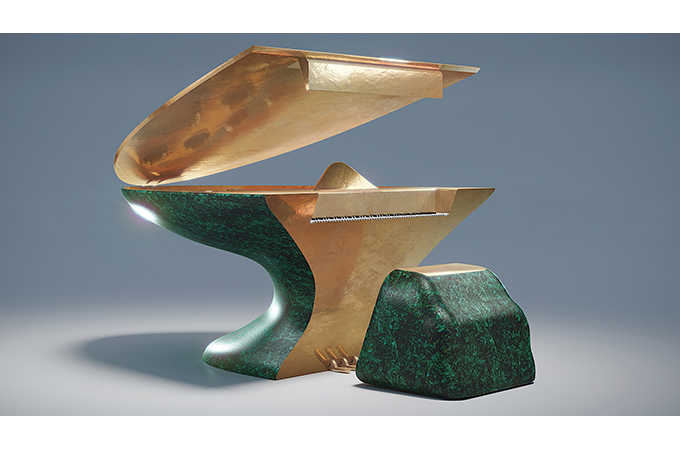