Tory Burch, a leading fashion brand, has opened a new boutique at the Riyadh Park Mall in Riyadh, Saudi Arabia. It follows the recent opening of an accessories-only concept at Kingdom Mall in Riyadh.

The two stores further extend the brand’s footprint in Saudi Arabia — complementing its boutiques in Jeddah and Al Khobar.

Meanwhile, Tory Burch has also announced the opening of its newly renovated boutique at Avenues Mall in Kuwait City on June 12. The store, originally launched in 2012, will feature the brand’s new design concept and complements the Tory Burch boutique at the 360 Mall, also in Kuwait City.

The façade of the store at Riyadh Park Mall is distinguished by green awnings and orange lacquer doors, signature Tory Burch design details. In keeping with all Tory Burch stores, the interior has been designed to create a residential feel.

Travertine floors in a basketweave pattern, oak panelling, cane tables and brass fretwork étagères offer a neutral backdrop for a sophisticated mix of furnishings, including a leopard rug, and banquettes covered in an exquisite floral inspired by Tory’s home in the West Indies.

A wide assortment of the Tory Burch collection will be available at the Riyadh Park Mall location, including ready-to-wear, shoes, handbags, and accessories.

Since launching its first boutique in the Middle East at The Dubai Mall in 2011, the brand has expanded to include 19 freestanding stores in the UAE, Azerbaijan, Bahrain, Egypt, Kuwait, Lebanon, Qatar and Saudi Arabia. Additional store openings are planned for the Middle East in the next year, continuing to bring Tory Burch’s unique design sensibility to the region. 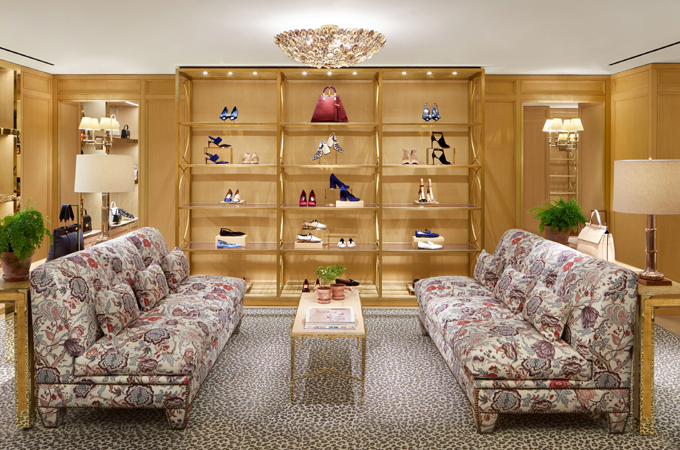