Hotels & Resorts
Raffles Seychelles reveals all about the birds and bees

The Raffles Praslin in the Seychelles has rolled out a “new menu of experiences” which allows its guests to relax the way they want, whether bird watching, island-hopping or simply taking in stunning vistas in this paradise of tropical islands.

“The Seychelles is all about new experiences, from island-hopping and wildlife watching to doing nothing more than drinking in incredible views on some of the world’s most beautiful beaches.  We know that one person’s idea of relaxation is very different to another’s, whether they choose hard physical exercise or time out to get back to themselves: whatever they want, it’s our job is to make life simple,” says  General Manager Christoph Ganster. “They should feel naturally relaxed, energised and motivated – as well as feeling truly looked after and pampered. We call the journey active relaxation.  It’s all about choice.”

With this in mind, Raffles Praslin has created a new menu of experiences curated by Bernard Lucas, the hotel’s Island Concierge.

Aride Island has some of the finest – and most important - seabird life in the western Indian Ocean, with more breeding species than any other island in the Seychelles. Eighteen species of native birds - including five found only in the Seychelles - breed here, and the island is carefully managed as a nature reserve by the Island Conservation Society of Seychelles. The only human inhabitants are the rangers, who work tirelessly to protect this incredibly important environment and are on hand to guide visitors around Aride.  A visit here is unmissable; no other island is so pristine and yet so accessible. Catch Great Frigatebird soaring from the cliffs in the north of the island, or spot the enigmatic Seychelles Magpie Robin – once deemed the rarest bird in the world.

Lucas recommends visiting the island to experience life as it was in the Seychelles many years ago, before the islands were settled on by humans.

The pace of life on La Digue is slow; unhurried, catch local people going about their daily business. Borrow a bicycle to explore the cinnamon and vanilla plantations, or travel by ox cart along the coast – a traditional form of transport which remains from the islands early days.

La Digue is famous for its beaches, most notably the dramatic granite formations and bright turquoise waters of Anse Source d’Argent. Lucas says he can share his insight on the “best secluded hidden spaces and small beaches which are practically untouched”.

Raffles Praslin Seychelles looks out over Curieuse – a small island, originally used as a leper colony. In 1979, the island and its waters were declared a Marine National Park to protect the native wildlife, which remains today. One side of the island is home to 500 friendly Aldabra giant tortoise who enjoy having daily visitors as well as being known for its Coco de Mer palms, giant Takamaka trees, and a large rookery of hawksbill turtles. Visit at the right time to catch the turtles laying their eggs in front of the Doctor’s House – the remnants of the leper colony turned into a museum narrating the island’s story.

Lucas can arrange for a picnic to be delivered to the island which can be enjoyed amongst these prehistoric creatures all while he shares the history of how the tortoises came to live there.

There is so much to explore from Praslin and island-hopping by boat is a great way to see it all, discovering one picture postcard beach to the next. For fishing enthusiasts Seychelles is a haven and Lucas advises taking full or half-day fishing trip by private boat in hopes of catching anything from Marlin to Yellowfin Tuna or his particular favourite, Kingfish. Romance and the Seychelles go hand in hand and what better way to celebrate a relationship than a private sunset cruise in the Indian Ocean, he says.

At Lucas’ request a chef from the hotel can travel to an island of the guests’ choice to cook a barbecue on the beach while he shares his knowledge on the history of the different Seychelles islands and how they were named.

During a visit to this protected national park Bernard will help guests spot the Black Parrot, one of the world’s rarest birds and only found in the Seychelles.

Located on Praslin, Anse Lazio is often named as one of the world’s top ten beaches. Beautifully framed by granite rocks and perfectly positioned for Indian Ocean sunsets, the beach has soft white sands leading to calm, clear waters.

Lucas suggests arriving in the late afternoon to soak up the last of the rays, before the Raffles Butler brings you a drink of your choice and delicious canapés as the sun sinks below the horizon.

“Lucas has a knack of being able to feel what his guests need - before they have even thought of it. He gives every guest an insider’s take on this dreamy island that he is lucky enough to call home – whether they are looking for exploration, activity or rest - or a combination of all three,” says Ganster. 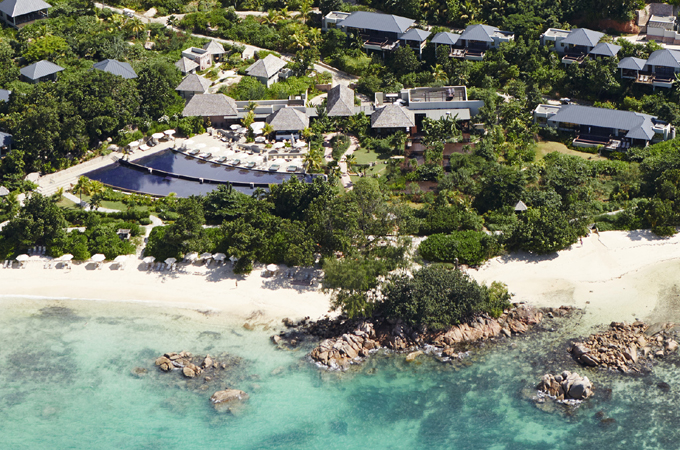