The experts were speaking at an event hosted by the National Bank of Abu Dhabi (NBAD) and CNBC to discuss the future of sukuk.

The expert panel discussed the marked global growth of the Islamic finance industry, with 2014 having been a particularly notable year, and the increasing demand for Shari'ah-compliant bonds. They agreed that the demand for sukuk significantly outweighs the supply, with growing investor appetite for more diverse investment opportunities.

During the event, which was attended by over 70 industry professionals, the panellists highlighted the importance of innovation and a greater diversity of issuers in order to satisfy demand and create a deeper market. Ultimately, the debate centred on the potential for sukuk to become a major financing tool and mainstream asset class.

The panellists recognised that much has been done in recent years to standardise the sukuk structuring process and make it more efficient but they agreed that Western institutions need to work closer with Shari'a boards to encourage more traditionally conventional issuers to tap the Islamic market.

Alex Thursby, NBAD’s Group Chief Executive Officer, said: "As one of the world’s leading sukuk arrangers, we believe there is a significant opportunity for multinationals to raise capital by issuing Shari’a compliant instruments. Sukuk, with its unique structure and characteristics, provides a compelling alternative to a conventional bond and offers a wide access to liquid assets. Our role as a leading financial institution in the region is to nurture the growth of the Islamic finance industry and drive economic activities and growth across the West-East Corridor."

Cairns commented: “2014 was a record year for international sukuk issuance. I am optimistic that this positive momentum will continue in 2015 supported by new first-time issuers and further product innovation. Given the significant liquidity within Islamic investors and across the Middle East, I see sukuk as a funding tool that is increasingly relevant to global borrowers".

The event, held under the theme, ‘The Future of Sukuk; West East Corridor’, was convened in response to the heightened interest in sukuk over the last 12 months, which has intensified following the successful recent sovereign issuances by a number of non-Islamic countries including the UK, South Africa and Luxembourg.

The panel was the second in a series of events taking place around the world ahead of NBAD’s 2015 Global Financial Markets Forum (GFMF) which is taking place in Abu Dhabi, UAE, next month.

It followed on from ‘The Future of Energy: West East Corridor’ event which was held in Kuala Lumpur, Malaysia, in January.

The next series event will be held in Mumbai, India, in June.

The 2015 GFMF, which will be held in Abu Dhabi on March 1 and 2, will showcase a high calibre range of regional and international speakers and facilitate thought-provoking discussions both on stage and in more informal networking discussions. The forum will be covered extensively by CNBC, which will be broadcasting live from their on-site studio at the Emirates Palace. 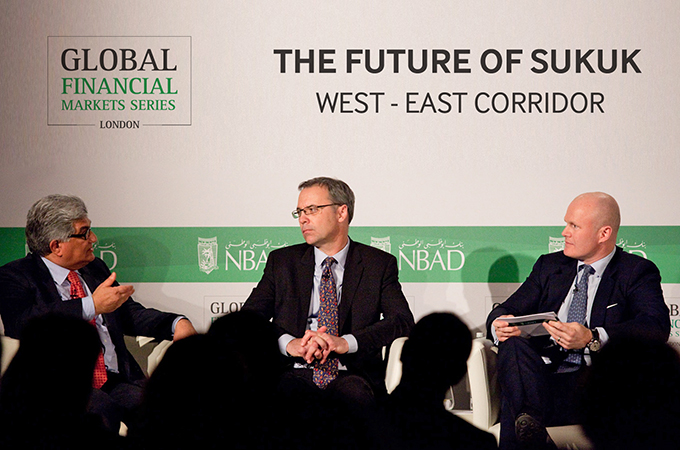