OMEGA has introduced an extraordinary new Olympic 1932 Chrono Chime, a ringing tribute to the exceptional skills of the Swiss brand's watchmakers.

Many great designs emerged in the transition period between the pocket and wristwatch, and the look of the watch draws its cues from that inventive era.

The movement, however, is the first of its kind. A cutting-edge calibre destined to make its own mark on watchmaking history.

Power source unlike any other

As it was not possible to modify existing components, OMEGA’s watchmakers were compelled to create the calibre from scratch – and by hand. OMEGA’s Co-Axial Master Chronometer Calibre 1932 is a fully integrated chronograph and minute repeater. Produced not by layering, tinkering or fitting new parts to old, but by fusing both functions together in one watch movement. It is in fact the most complicated calibre OMEGA has ever made, the watchmaker said.

"In order for a wearer to chime the elapsed time, safely and seamlessly, it requires its own mechanical “brain” to merge the functions perfectly," it said.

Developed with sister company Blancpain, the 1932 movement took six years to complete - and there were many challenges along the way. In fact, before they could even begin, the watchmakers had to find a way to expand the existing boundaries of OMEGA’s famous Co-Axial escapement.

The system, developed by the brilliant watchmaker Georges Daniels, is an essential component in all of OMEGA’s movements.

Designed to operate at a relatively standard frequency (between 3 and 4 Hz), it presented a major constraint when developing the new movement, which must beat at 5 Hz to display 1/10th of a second, like the pocket chronographs used to time the Los Angeles 1932 Olympic Games. It didn’t stop there.

The watchmakers would also have to add three chime cams to the already complicated chronograph mechanism, include two security functions to prevent mal-manipulation, and integrate a split-seconds function.

To achieve Master Chronometer status, the calibre would have to withstand external magnetic fields of 15,000 gauss, requiring the use of 50 non-ferrous components.

Fortunately, the dedicated technical team thrived on finding solutions. The precision and regularity of OMEGA’s watch parts – and the exceptional skill of its watchmakers - made the seemingly impossible, possible.

Of course, to create a calibre from scratch required multiple innovations. Proof of the Chrono Chime’s complexity can be seen - and counted. OMEGA’s extraordinary invention required up to 17 patents, related to the function of the Calibre 1932, its antimagnetic technology and the watch’s external parts.

In addition to being a technological marvel, it is a thing of beauty. Satin-brushed and mirror polished. A luxurious handmade calibre with 46.44 grams of gold. Easy on the eye - and the ear.

As well as being strikingly good looking, OMEGA’s 18K Sedna Gold produces a beautiful sound when struck. Double hammers, fitted with an insert of hardened steel, hit pitch-perfect 18K Sedna Gold gongs, hand-tuned by OMEGA’s watchmakers. These gongs, fixed to the case body to produce maximum chime, are a respectful nod to the bells used by OMEGA to signal the last lap at the Olympic Games and other sporting events.

Bronze-age timekeeping technology still in use

On the dial, the 18K Sedna Gold central hour/minute hands are in blued PVD, as are the subdial hands on the small seconds at 6 o’clock and 15-minute recorder at 12 o’clock.

For easy readability, the display includes a blued CVD central seconds hand and red-varnished split-seconds hand. There is a further tribute to 1932 in the Arabic numerals and minute track in black “Petit Feu” enamel.

Pushers are primarily functional, but as always, OMEGA has added an extra touch of elegance to make the action of timing an aesthetic experience. The chime pusher at 5 o’clock sports a charming polished and embossed music note.

Beautifully engraved on the caseback are the words Official Timekeeper of the Olympic Games, Co-Axial Master Chronometer and the watch’s number.

The brown leather strap with 18K Sedna Gold buckle includes OMEGA’s new Quick-Change patented system – and for a very practical reason. The special presentation box includes an additional leather strap and two leather cords, allowing the “timekeeper” to wear it as a discreet pocket watch or a

stopwatch around the neck.

The walnut presentation box also sounds as good as it looks. It features a resonance plate made of spruce to amplify the precise rhythm, tone, harmony and length of each chime.

For those who prefer their watches fixed firmly to the wrist, OMEGA has produced a Speedmaster powered by the 1932 Calibre. The classic 45 mm “Numbered Edition” Chrono Chime has an 18K Sedna Gold case inspired by the 2nd generation Speedmaster, making it a commemorative piece in its own right, as the CK 2998 was the first watch worn in space 60 years ago

Although the movement is the same for both watches, the functional and decorative pushers are in different positions. With a chime at 8 o’clock and split seconds at 2 o’clock. For the Speedmaster, OMEGA’s ingenious watchmakers turned the calibre around to suit the configuration of the case and accommodate the two subdials.

Completing the look is a bracelet and buckle in 18K Sedna Gold.

Collectors of the Speedmaster will also receive the special walnut presentation box with resonance plate. 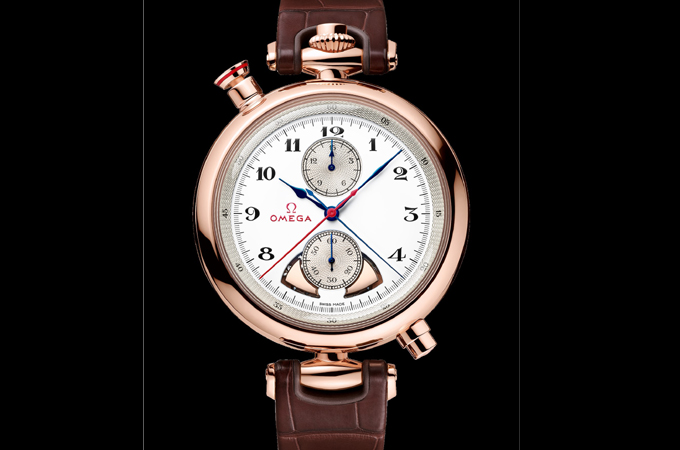 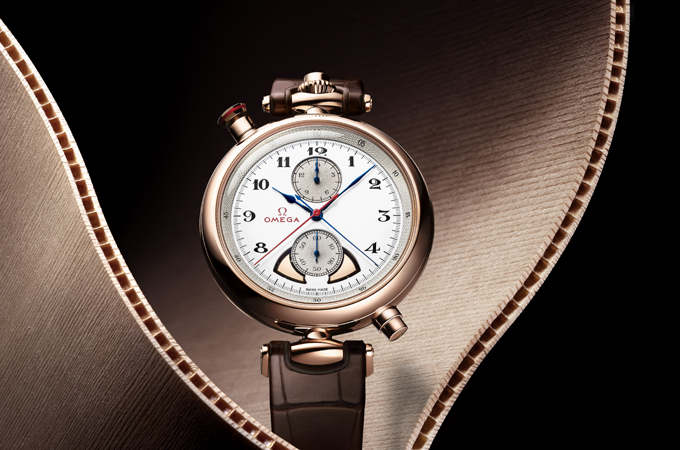 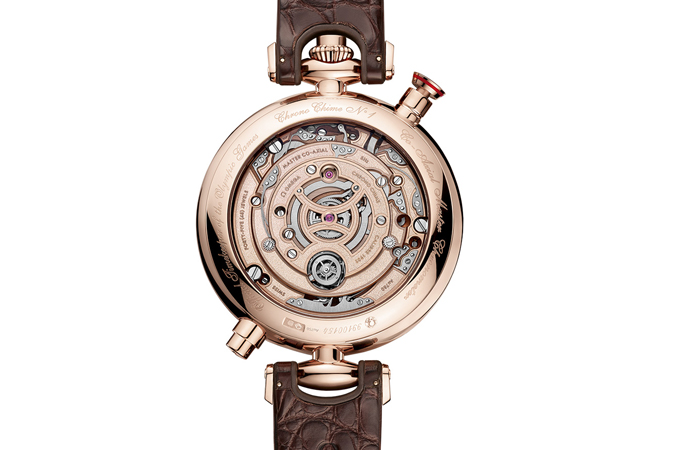 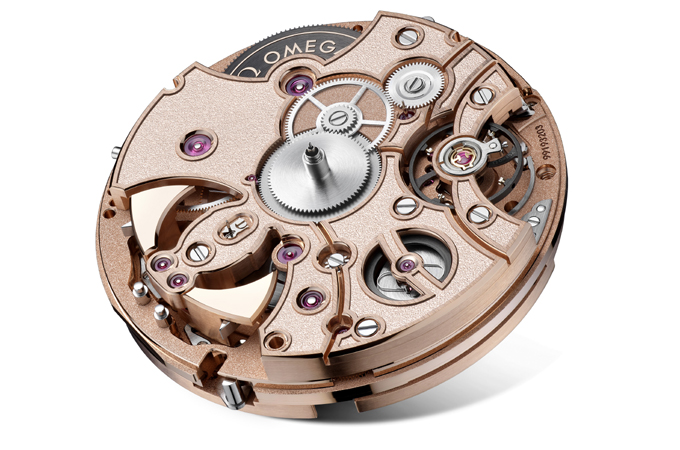 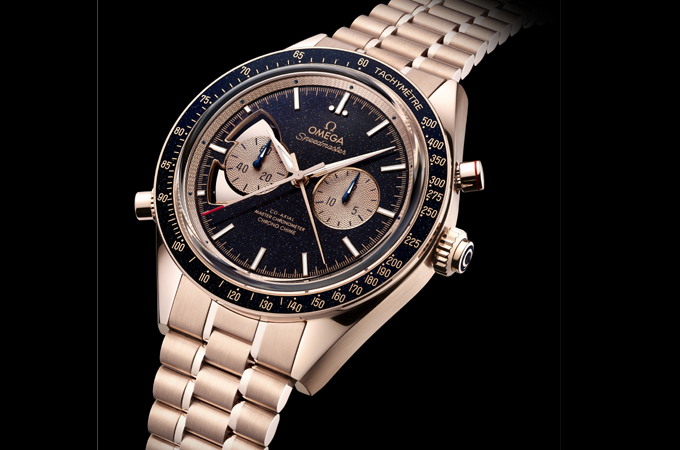 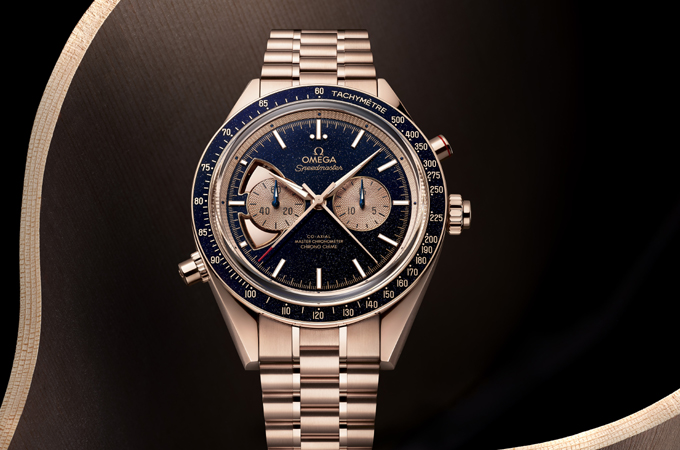