Motoring
Lotus Back in Bahrain

Lotus, an iconic British sports car company, has returned to the Bahrain automotive landscape after almost a decade being away, and with a new retail partner.

Development of a completely new showroom for the cars is under way in the exclusive Moda Mall shopping complex. It will be operated by Adamas Bahrain Motors Company, a highly respected business with a wealth of experience in selling performance, premium and luxury cars across the Middle East and Asia.

Taking centre stage when the showroom opens in late spring will be the critically acclaimed Lotus Evora GT, a car which has won universal praise from motoring media in the US where a near-identical model is on sale. Also available will be the Lotus Exige 20th Anniversary special edition, which features an enhanced specification over the standard Exige.

The Bahrain showroom will be one of the first in the world to display the new Lotus retail identity. Uniquely Lotus and defiantly disruptive, the new design language for Lotus retail environments worldwide draws directly on the company’s design and engineering prowess, redefining the retail experience by creating a bold and original new showroom layout. Sculptural and artistic in its execution, it captures the energy of the brand as it transforms from a UK sports car company to a genuine performance car player on the world stage.

Jonathan Stretton, Regional Director for the Middle East at Lotus, commented: “We are delighted to announce the appointment of Adamas Bahrain Motors in the Kingdom of Bahrain. It’s another important development in the growth of Lotus operations in the Middle East. Confidence is high that the discerning Bahraini customers will respond well to the current Lotus range, and the new and exciting products to be released in the near future.”

Karl Hamer, Chief Executive Officer of Adamas Motors, noted: “We are very proud to announce that Adamas Motors has been chosen to represent Lotus Cars in the Kingdom of Bahrain. Our new state-of-the-art showroom in Moda Mall, supported by our service centre in Al Nuwaidrat Road, will assist the customers with the highest level of customer satisfaction.” 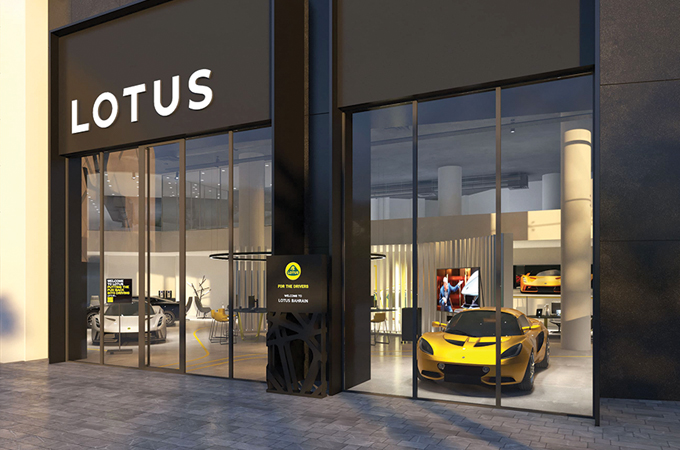