For the first time, the Impressionist and Modern Art auction in Paris by Christie’s will present a small section dedicated to two pioneers of modern Middle Eastern art on April 14.

In 2021, the annual dedicated Middle Eastern Art sale will take place in London next October and mark the 15th anniversary of Christie’s in the Middle East.

Valérie Didier, Associate Director, Impressionist and Modern Art department, comments: “This is a major first for Christie's Paris Impressionist and Modern Art Auction, presenting this important group of works by brother and sister Mohamed and Effat Naghi. The auction will bring these pioneering Egyptian modern artists to the attention of our international collectors around the globe. Coming directly from the Naghi estate the group offers a fresh look at their respective works, recalling the lasting impression a visit to Giverny in 1918 had on Mohammed Naghi, when he met Claude Monet. These works are also highlighting the artistic and theoretical links between the Naghis and their friend, French artist André Lhote, who in the 1950s extensively worked closely with Effat in Egypt.”

Naghi, an Egyptian diplomat, was also a renowned painter. Naghi’s travels and studies in Europe brought him to the core of the artistic and cultural revolutions of the early 20th century, which led him to found the Atelier d'Alexandrie in Alexandria in 1935. This artists’ studio was ultimately the catalyser which officially establish the flourishing Alexandrian art scene.

Naghi was Egypt's delegate to the Unesco Fine Arts Commission in London and Paris in 1946, and later settled in Italy from 1947 to 1950 where he took on the position as director of the Egyptian Academy of Arts in Rome. His work was presented twice at the Venice Biennale, in 1948 and later in 1954.

A figurative painter, his favourite subjects were portraits, landscapes and genre scenes. In addition to decorating the Egyptian Pavilion at the 1937 International Exhibition in Paris, Mohamed Naghi exhibited his works in London by organizing the Egypt - Abyssinia exhibition in 1936 – a solo show of his most sought-after works produced during his diplomatic mission in Abyssinia in 1932. It was during that exhibition that Lord Blossom purchased The Religious Procession – Addis Ababa and gifted it to the Tate Modern, London, where it has been ever since.

A major work by Mohamed Naghi, Les marchands de peaux en Abyssinie, from the same highly sought-after series as the Tate Modern canvas, will be offered via Christie’s private sale, and will be exhibited alongside 11 works from the estate. Amongst these, two works will be offered in the 14th April live sale including one by Mohamed Naghi – also coming from the 1932 Abyssinian series, titled Les gardes frontières - estimated at €32,000-50,000 and the second, a mesmerizing and mystical composition by Effat Naghi, estimated at €40,000-60,000 (ill.in the introduction). The other nine works will be presented in the online sale (7-19 April).

Whilst Mohammed Naghi’s style to combine Western aesthetics with Egypt’s rich ancient cultural heritage, Effat Naghi’s work was at first very figurative with beautiful colourful rural landscapes of Egypt, and she was then inspired by the local archaeological and folk artefacts, which often appear in her works, but also by astrology (exemplified in one of her richly textured paper collages presented in the online sale). Although much younger than her brother, Effat was one of the leading female figures of Egypt’s modern art scene in the 1950s-1970s. With her daring and innovating style, far removed from any established aesthetic. Integrating a wide variety of materials, antique painted wood, and magic amulets, Effat Naghi produced densely textured and colourful pieces resonating the primitivist aesthetics so deeply rooted in Egypt of the 1920s.

All 11 works as well as the one offered via private sale will be exhibited between April 9 and 14 at Christie’s: 9 avenue Matignon, 75008 Paris. 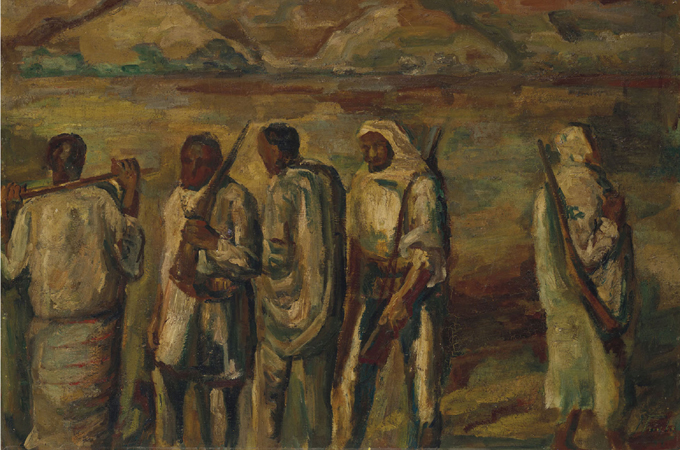 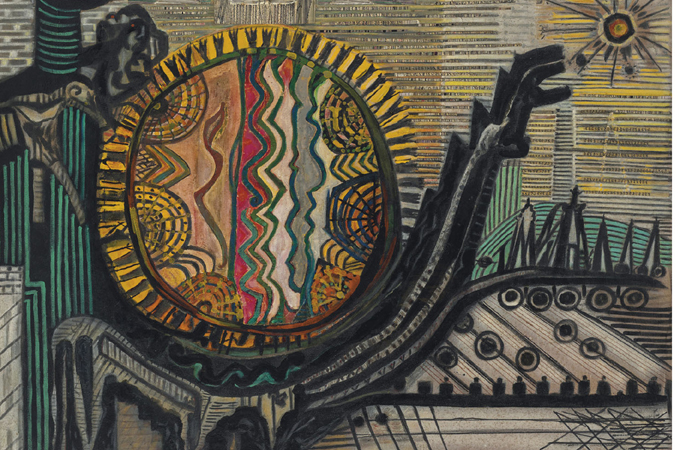