Jafri, one of the most celebrated artists of our time, has been able to reach more than 2.5 billion people worldwide through this single piece of art which took seven months, 20 hours a day, to complete. He used 1,065 paintbrushes and a whopping 6,300 litres of paint to create the extraordinary painting.

Jafri’s record-breaking painting, now described as ‘The Modern-Day Sistine Chapel’, is part of his charitable initiative ‘Humanity Inspired’, supported by over 100 A-list celebrities. It was launched under the patronage of Sheikh Nahayan Mabarak Al Nahayan, UAE Cabinet Member, Minister of Tolerance and Coexistence, in partnership with Dubai Cares, part of the Mohammed bin Rashid Al Maktoum Global Initiatives and Atlantis, The Palm. Considered the largest worldwide social, artistic and philanthropic initiative in history, the painting was created in Atlantis, The Palm’s ballroom, which was converted into the artist’s studio, where Jafri spent a period of 28 weeks from March to September 2020 during the lockdown.

Jafri comments on his world record and his brave initiative, “It was an honour to receive the Guinness World Records title for my project ‘The Journey of Humanity’. This is just the beginning of the ‘Humanity Inspired’ journey. ‘Humanity Inspired’ and ‘The Journey of Humanity’ is much more than a painting, it is my initiative for true societal change through the hearts, minds & souls of the children of the world – a springboard for a better future for all Humanity.

“If one person can spend 20 hours a day (on four hours sleep) for seven months continuously, creating a painting of over 17,000 square feet on his own, imagine what 7.5 billion people could do together if we stopped the nonsense of discrimination, judgement and agenda. 'One World, One Soul, One Planet’.

“The Largest Art Canvas is a record that we accepted by Sacha,” said Shaddy Gaad – Senior Marketing Manager (MENA) at Guinness World Records. “We are confident that the humanitarian cause behind the achievement is one that will inspire people. We congratulate him and those involved in this extraordinary achievement and we are happy to declare them as Officially Amazing.”

Since moving from the Atlantis Ballroom, this monumental painting has been broken down into numbered, signed, catalogued, and framed canvases. 70 individually framed pieces of ‘The Journey of Humanity’ will be sold across four auctions in 2021 with the funds being raised for charitable initiatives in the sectors of education, digital connectivity, healthcare, and sanitation; in partnership with Dubai Cares, Unicef, Unesco, Global Gift Foundation, as well as the Ministry of Tolerance and Coexistence and the Ministry of Education in the UAE.

Dr Tariq Al Gurg, Chief Executive Officer at Dubai Cares and Member of its Board of Directors, said: “Dubai Cares would like to congratulate Sacha Jafri on this unparalleled accomplishment that will paint a new future for many underprivileged children and youth around the world. ‘The Journey of Humanity’ is a remarkable showcase of the power of collective effort and its tremendous impact in creating positive change. We are proud to be part of this extraordinary initiative that is set to empower its beneficiaries with the basic human opportunity to transform their lives into unique masterpieces of their own.”

On the 25th February, this masterpiece returns to the place of its creation, the enormous 2100 sq m Atlantis ballroom. This will be the first time that the canvas is ‘reunited’ as each framed piece will be assembled, recreating the original painting.

“We are thrilled that Sacha Jafri’s hugely inspirational project, Humanity Inspired, has officially set the Guinness World Records™️ title for ‘The Largest Art Canvas’ in the world. Atlantis, The Palm was honoured to host Sacha in our premises where he created this monumental masterpiece and we look forward to inviting him back for the great unveiling. We also stand behind him and his endeavours to raise US$30 million to help change the lives of the most in-need children from the poorest regions of the world, most affected by the aftermath of the Covid-19 pandemic. This is a project close to our hearts and we wish him the very best on the next stage of his journey,” said Tim Kelly, Executive Vice President and Managing Director, Atlantis Dubai.

With special viewing platforms and a maze through which the painting can be viewed, the Royal Unveiling promises to be an auspicious moment to be enjoyed by a select few. Needless to say, social distancing measures will be in place.

With special performances by some of the world’s greatest talents, including, Singer, songwriter, actress and activist, Leona Lewis, X Factor judge, whose smash hit “Bleeding Love” spent 7 weeks at No.1 in 30 countries, the event will certainly be a celebration of hope, culture and inspiration.

Honorary Chair of Global Gift Foundation, actress and philanthropist, Eva Longoria said: “Maria and I, together with our ‘Global-Gifters,’ and our partners at Unicef and Dubai Cares, feel honoured to be part of ‘We Stand Together United – Humanity Inspired,’ continuing our long-term relationship with Sacha Jafri,” said Eva Longoria. “Sacha has raised over $60 million for the most noteworthy causes around the world, including our own, and we are thrilled to be collaborating on this important project.”

Founder of Global Gift Foundation, Maria Bravo expressed how “for many years now, Sacha has lent his time and incredible talent and energy to help us raise much-needed funds in support of The Global Gift Foundation and consequently a large number of International NGOs across the world. A large plethora of our Global Gifters has also been keen to actively participate in adding to the poignancy and legacy of his works of art.

"Sacha's achievement in setting the Guinness World Record for ‘The Largest Art Canvas’ in the name of philanthropy is just monumental and speaks volumes of his generosity and kindness. The effort behind this project is huge but will mean we can really make a tangible difference to children in need around the world. Myself, Eva and all our Global Gifters can´t wait to see this symbolic and historic piece of art in person,” Bravo said.

Jafri’s charitable initiative ‘Humanity Inspired’ aims to raise more than $30 million and is imbued by his vision to connect people for a more conscious and empathetic world post the Covid-19 pandemic.

From February to May 2021, select pieces from ‘The Journey of Humanity’, along with Jafri’s much-celebrated ‘18yr Retrospective Collection’ will be on show at the largest gallery in the UAE, the Leila Heller Gallery, which is located in Alserkal Avenue, Dubai. The gallery is helmed by internationally acclaimed gallerist Leila Heller, who is also known for her famous New York gallery which features works by Andy Warhol, Richard Prince, Jeff Koons, Keith Haring and Tony Cragg. 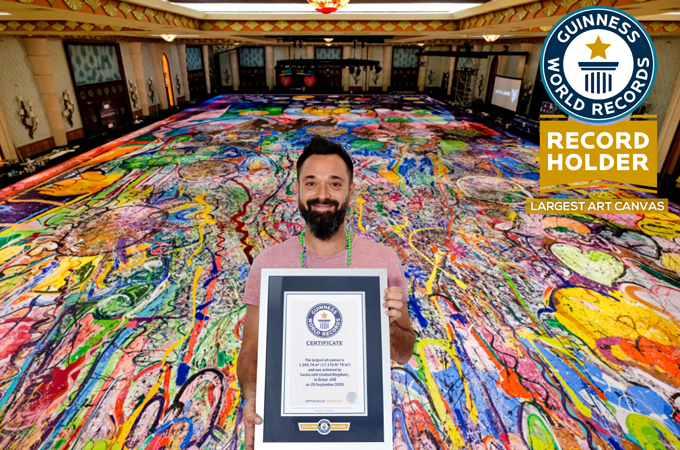 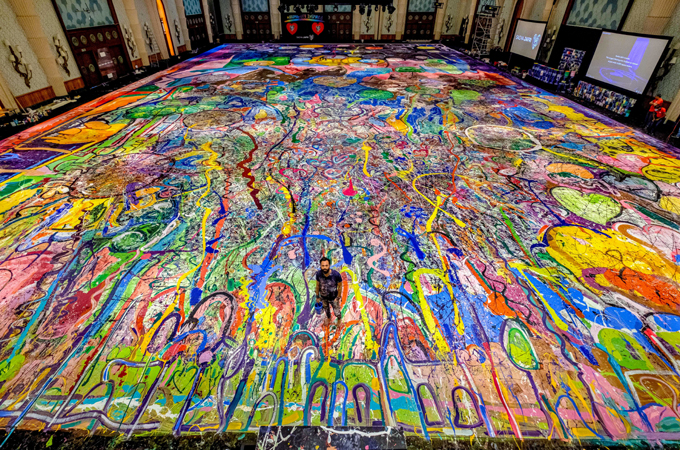 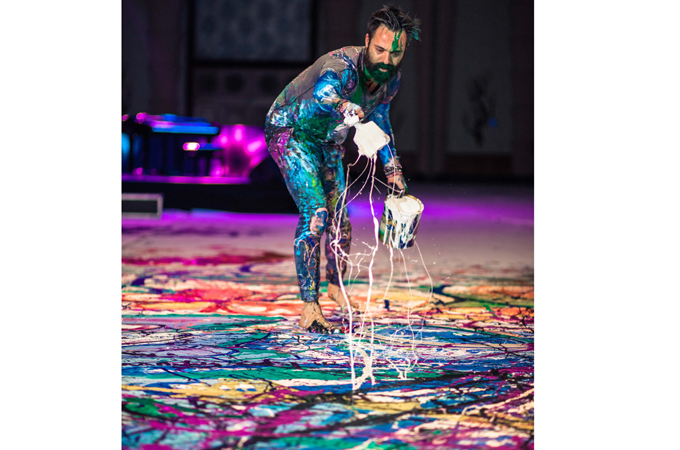 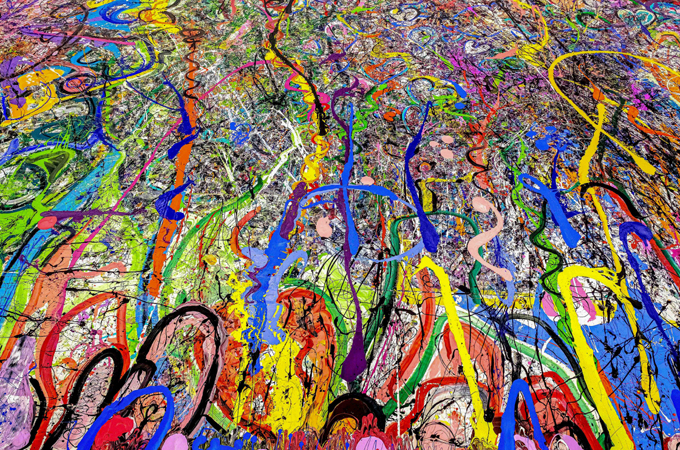 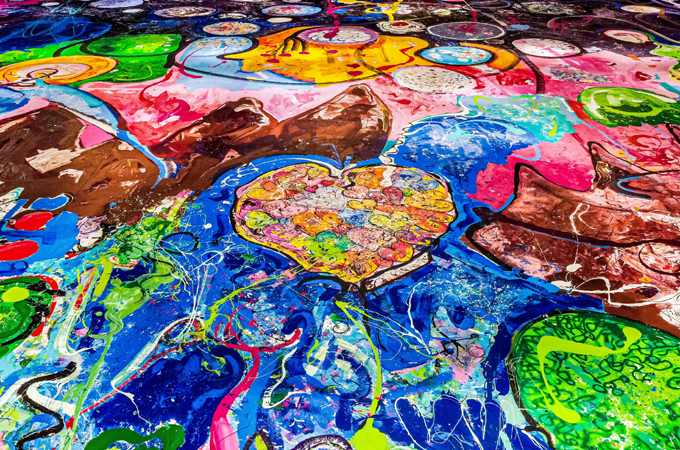 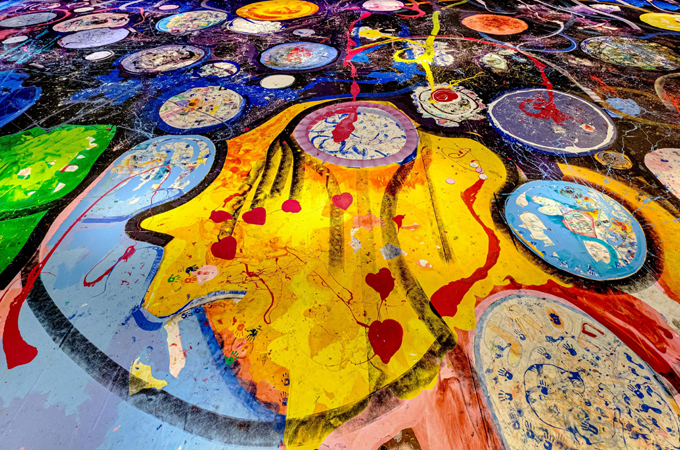