The global interest in art and the ancient has refused to succumb to the pandemic’s virulence and now thrives online, staying safe and sound.

Auction major Christie’s will host sales of its highly-anticipated Middle Eastern Modern and Contemporary art, a special curated art sale as well as a charity auction to support Beirut, Lebanon, in November. All of these have moved online due to the uncertain health situation.

Overseen by the Dubai team, the series of sales will include, for the first time, a special section within the Modern and Contemporary sale dedicated to Middle Eastern Design.

Caroline Louca-Kirkland, Managing Director Christie’s Middle East, said: “We mark this autumn season with kickstarting a fresh strategy for the category, in alignment with the evolving and maturing regional market and focusing on strong quality works. As market leaders Christie’s is taking the initiative in cultivating interest through strong teamwork and collaboration, with greater leverage from a regional and international standpoint. We will be infusing our traditional auctions with a design section and presenting a separate guest curated sale connecting the Middle East with other geographies.”

Last seen in public at the Andy Warhol Museum in Pittsburgh, US in early 2018, Once Upon a Time by Farhad Moshiri (estimate: £220,000-280,000) will be leading Christie’s Middle Eastern Modern and Contemporary Art Auction to be held online between November 4 and 24.

The sale offers a diverse selection with works from artists across the Mena region, covering an array of aesthetics and art schools from Morocco to Iran. Headline lots include works by Farid Belkahia, Mohamed Melehi, Samia Halaby and Rachid Koraïchi.

Michael Jeha, Chairman of Christie’s Middle East, said: “As market leaders, we continuously focus on reinventing our offerings. Together as a team, including our wide net of regional consultants, we have been working on the new sales strategy for the autumn, which contains now four auctions in total.”

Moshiri produced Once Upon a Time in 2011 as part of a series of four pieces, becoming the first Middle Eastern artist to cooperate with Louis Vuitton. “It is a work inspired by my collection of old used postcards, sent to loved ones during travel or festive seasons,” the artist recalled, and Louis Vuitton representing for him the ultimate spirit of travelling.

Once Upon a Time represents the artist’s most beautiful and intricate work from the series and combines his signature styles – the bead and the frosting – in perfect harmony. The work is heavily decorated with frosted borders, for which the artist applied the paint by using an old frosting set and with intricate beading. Considered an international leader in the neo-pop movement as well as one of the most prominent figures of Middle Eastern contemporary art, Moshiri became well known for his ironic interpretations of hybrids between traditional Iranian forms and those of the globalised consumerist and popular culture.

Guest curated by Dina Nasser-Khadivi, an independent art advisor and Christie’s International Consultant, this sale will present a selection of works by contemporary artists from the Middle East, Latin America and Africa showcasing how media and materials can be used and recycled into powerful statements and works of art.

A concept embracing innovation and multi-cultural connections, it will aim to continue supporting diversity in the market, this will be the first of a series of curated sales supported by Christie’s. 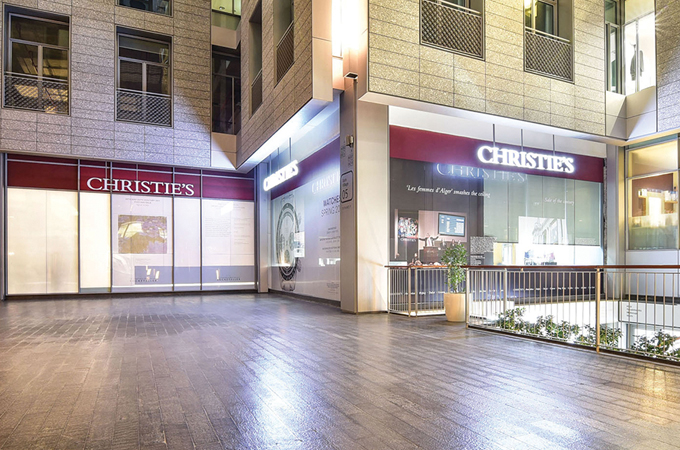 "
‘As market leaders Christie’s is taking the initiative in cultivating interest through strong teamwork and collaboration, with greater leverage from a regional and international standpoint’