One of the last few important works by the artist remaining in private hands, it depicts Cairo’s most desired Bazaar.

The auction will be held on November 18.

Arne Everwijn, Christie’s Senior Specialist European Art, said: “The Bezestein Bazaar of El Khan Khalil, Cairo is one of the largest paintings by John Frederick Lewis to come to auction as well as one of the last of this calibre remaining in private hands. Christie’s is the undisputed market leader for paintings by Lewis, holding the world record price for the artist at auction, as well as six of the top ten prices for the artist at auction. We are thrilled to be presenting this important work to the international market.”

Orientalism is the vision of the East by artists of the West. European painters of the 19th century — from England, France and Germany especially — visited the areas we now know as the Near East, Middle East and North Africa, and depicted what they saw in wide-eyed admiration. Their paintings and works on paper tapped into a growing fascination with travel and far-off, exotic lands, which had previously been beyond the comprehension of the average Londoner or Parisian.

John Frederick Lewis (London 14 July 1804-15 August 1876) was an English Orientalist painter. Yet unlike his other artistic contemporaries who made the traditional Orientalist pilgrimage, Lewis spent a decade in Egypt. The years spanning 1840-51 found the artist firmly entrenched in Arab life. Dressed in native garb and at ease with the language, he easily disappeared into the crowd to observe and sketch for hours, later building up his oil compositions in his studio. His very careful and loving representation of Islamic architecture, furnishings, screens, and costumes set new standards of realism, which influenced other artists.

The Bezestein Bazaar of El Khan Khalil, Cairo was painted in 1872 in Lewis’ studio in Walton-on-Thames, close to Hampton Court Palace in Surrey. This celebrated composition - a stunning visual spectacle of a traditional Egyptian souk or marketplace - stands as a sort of artistic memoir of a life-long passion for Egypt, based on numerous sketches of people and places he encountered.

Soon after the opening of the Royal Academy exhibition in 1874, when the work was publicly exhibited for the first time, it is recorded that a collector from Glasgow made a private offer to buy the present work for the then generous sum of 10,000 guineas - an offer however stridently refused by the painting's first owner, David Price.

The district of Khan el-Khalili, home to a vast network of markets, was one of the most important trading centres in Cairo. Also known as the Turkish bazaar during the Ottoman period, the complex dates back to the fourteenth century when it was built by the Emir Djaharks el-Khalili in the heart of the Fatimid city in medieval Cairo.

The market Lewis has depicted is, in fact, the great Ghuriyya market, the main cloth market of Cairo and a southern extension of El Khan Khalili. Named after the ruling 16th Century Sultan Al-Ghuri. In contrast to his earlier market scenes that emphasized smaller compositional groups or individual portrayals of merchants, the present composition is his grandest and most animated depiction of the interior of a bazaar. A long narrow structure with vaulted ceilings, the market is defined by rows of stalls where merchants display their fine silks and fabrics.

From the intricately patterned fabrics to other decorative embellishments such as the hookah and the bowl of freshly cut fruit, Lewis lavishes his attentions on the exquisite dress and shop trinkets. The degree of detail achieved is not surprising due to his immense personal collection of objects, instruments and clothing which he brought back to England for use as studio props.

Even more remarkable is his ability to attain compositional balance between the figures and the architectural space. Originating in the high and narrow walls, strong perspective lines recess down the corridor and sharply converge at the opposite sunlit entrance - an innovative pictorial device that accentuates the length of the cavernous bazaar. Lewis played with light like a magician delving into the complexities and patterns created by the dappling sunlight. 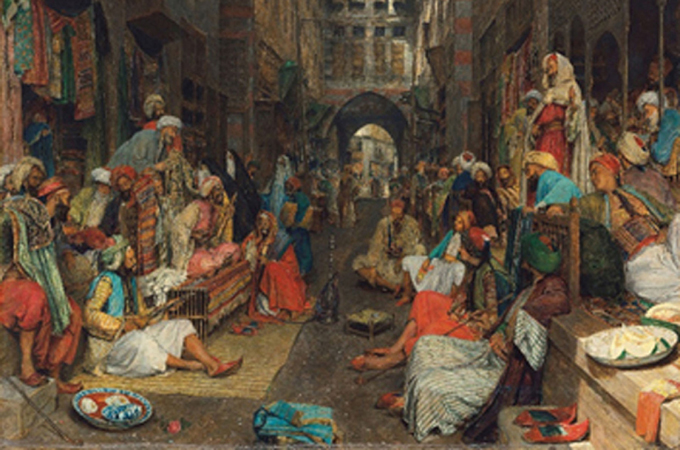 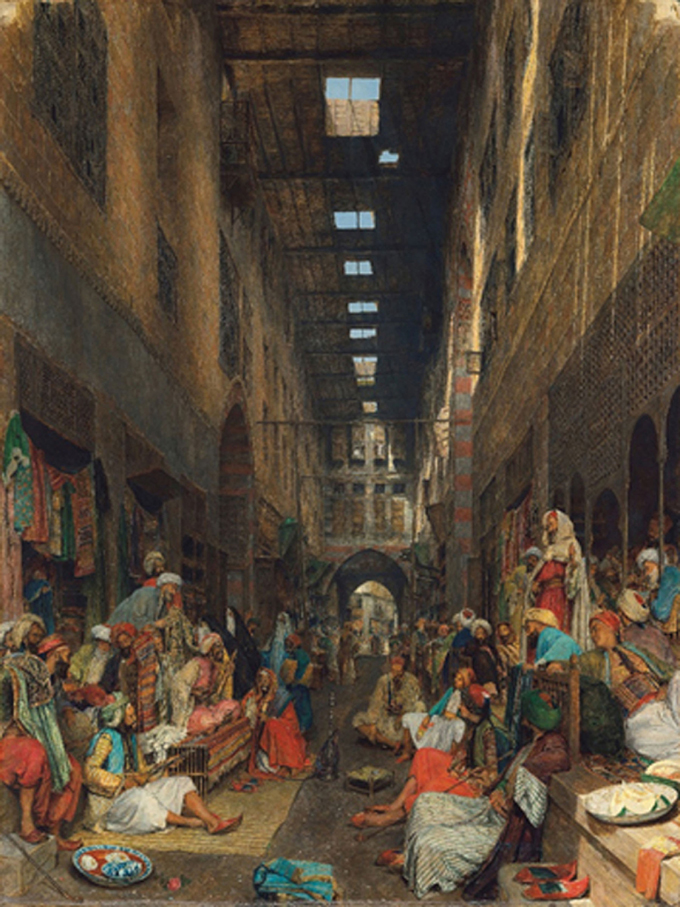