As One Blackfriars goes up at a busy construction site in London, interest in the landmark 170-m tower continues to grow, according to the developers behind the project.

Construction of the luxury tower reached a landmark earlier this year with a record concrete pour achieved for its foundations. Meanwhile, an on-site marketing suite is wowing potential buyers by demonstrating the sheer quality, scale and luxury of the project.

One Blackfriars is being developed by St George of the Berkeley Group, and follows the success of The Tower at One St George Wharf, a landmark 181-m skyscraper which was entirely sold off-plan.

One Blackfriars will rise 170 m high on London’s Southbank. The 50-storey tower will offer 274 new homes, a boutique-style hotel of 161 rooms, retail outlets and even an executive lounge on the 32nd floor.

With prices starting from £1.15 million ($1.75 million) and rising up to £23 million ($34.9 million), the tower’s apartments will offer three distinct themes, in addition to an exquisite Royal Collection on the upper floors and a five-storey penthouse which promises the ultimate in life at the very top!

Details about the ‘pentuplex’ – which will be One Blackfriars’ crowning glory – will be revealed later this year.

Surrounding the tower is a landscaped public plaza with water features and commissioned works of art. This accessible plaza will be open to residents as well as the wider public, providing relaxing and informal spaces for meeting and social gatherings.

The inspiration for the shape of the tower lies in the form of the Finnish Lansetti II vase crafted in 1952 by designer Timo Sarpaneva. Its form will also be seen repeated in detail inside the tower.

“It is well known that land in London is scarce and One Blackfriars is an exceptional example of how a formerly unoccupied site can be used to the optimum benefit of both future residents and the wider public. In blending luxury new homes with open public space at an outstanding position on the banks of the River Thames, this dynamic mixed-use development is a testament to the vision and ambition of the project team,” says a spokesman for St George.

The tower’s strategic location is also a key selling point: close by is Borough Market , London’s gourmet paradise filled with artisan produce from around Britain, Shakespeare’s Globe theatre is just beyond the globally renowned Tate Modern while the Royal Festival Hall is within easy reach.

One Blackfriars benefits from several striking design features that include a double façade and ‘sky gardens’ for each apartment.

Set back from the outer layer is an inner façade of 3,659 panels incorporating swing doors and sliding doors enabling residents to enjoy unprecedented views towards St Paul’s Cathedral and the City of London.

This double-skin façade also helps fresh air to circulate through the building, reducing the need for further cooling systems. As a result of the double-skin façade, a terraced ‘sky garden’ is created and is accessed through sliding doors from the living room. The ‘sky gardens’ are not heated or cooled as they are beyond the thermal line of the building.

Ian Simpson of Ian Simpson Architects comments: “Our vision has always been to contribute to the London skyline to create a beautiful, elegant and tall structure that could co-exist alongside London’s historic and contemporary icons such as St Paul’s and 30 St Mary Axe. Cities must change and evolve and whilst it is important to respect the historic context, London must evolve, embrace change and respond to the needs of the 21st century if it is to maintain its global status.

“We have contributed to the emerging skylines of various cities by introducing appropriate innovative and distinctive buildings. The location of One Blackfriars inspired our concept for the creation of a dynamic and fluid form, a beautiful, organic structure embedded within the Southbank, which is a place of culture and the arts, vibrant and buzzing with life and people. A new public space has been created at the heart of the site. The tapering form of the tower touches the ground lightly, maximising the opportunity for people to relax and enjoy the life and ambiance of this unique part of the Southbank.”

The residences have been crafted by interior design practice Tara Bernerd & Partners to complement the unique building and maximise space, light and views. Given London’s vibrant cultural history and One Blackfriars close proximity to the Southbank Centre – the largest single run arts centre in the world – the interior design language has been influenced by three famous artists: the 18th century landscape painter Thomas Gainsborough, the romanticist landscape painter J M W Turner, and the 20th century modernist sculptor Barbara Hepworth.

Thus the tower’s three levels of specifications – Gainsborough, Turner and Hepworth – each enjoys a unique identity influenced by their namesake’s art.

“With prices starting at £2.33 million ($3.52 million) for the two- and three-bedroom units, One Blackfriars offers buyers the opportunity to select from two distinct design palettes within three design languages inspired by artists of distinction and offering the opportunity to more carefully customise an apartment to create an ambiance that suits them,” explains the spokesman. “The choice is not limitless, it is curated, yet you are empowered to create your own ambiance.”


AT THE CUTTING EDGE

The aesthetic of the design schemes is complemented by cutting-edge technology to create truly unique residences that combine the finest materials with high specification appliances to deliver the ultimate in contemporary living. Stylish kitchens, marble bathrooms, elegant and peaceful bedrooms, spacious living rooms, and ‘sky gardens’ create sophisticated elegant and comfortable homes while floor-to-ceiling windows make the most of the stunning and panoramic views and flood the apartments with natural daylight.

A visit to the full-size onsite show apartments – which have been meticulously created over three levels and include lifts and lobby areas – will not fail to leave potential buyers impressed. One can admire the choice of materials, touch the quality of the build, admire the ‘sky garden’ and walk between the twin facades that make up the curving flowing walls of the tower.

Within the tower, the facilities of One Blackfriars are comprehensive.

The double-height entrance foyer is finished in stone and timber and boasts water features and trees. There’s even a feature fireplace for the cooler days and nights as well as seating areas with a dedicated 24-hour concierge service provided by Harrods Estates, on hand to assist tenants with a wide variety of services such as travel arrangements or tickets to events, as well as greeting them and their guests.

Venture further into the tower and one will find a 20-m swimming pool, fully equipped gymnasium overlooking a Zen garden space, a wine cellar, and a golf simulator for those who need to maintain their swing.

Tired muscles then may be soothed with a visit to the in-house spa, with sauna, steam room, snow room, and treatment room. One can also go to the movies and entertain friends and family within a private cinema.

Meanwhile, on the 32nd floor there will be an executive lounge, complete with a private dining area providing an ideal space for entertaining or to host a more serious business gathering while reflecting on the panoramic views across the city.

All car parking is planned to be valet parking; even electric car charging has been considered.

The tower has high-speed lifts, access to which is controlled, while closed circuit television (CCTV) coverage of the main public areas provides additional security and peace of mind to its tenants.

Swift connectivity to the world is assured, with London City airport less than 16 km away as is Battersea Heliport. High-speed trains connect to Brussels, Paris and Europe from Euston no more than 4 km distant, while on the perimeter of greater London are Gatwick, Heathrow and Stanstead as well as more select airports such as Farnborough, Biggin Hill, Oxford and Cambridge that specialise in corporate, private and general aviation.

The spokesman expects the tower to generate a lot of interest from wealthy individuals in the Gulf. 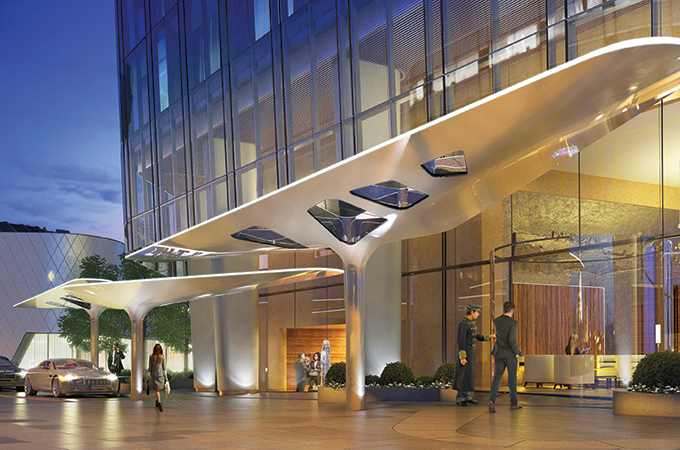 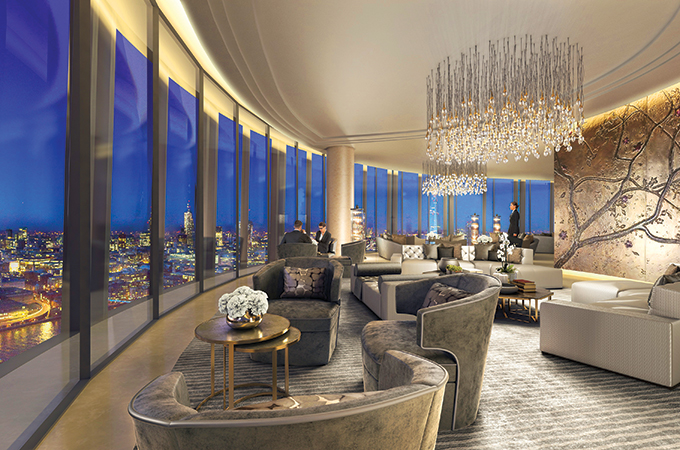 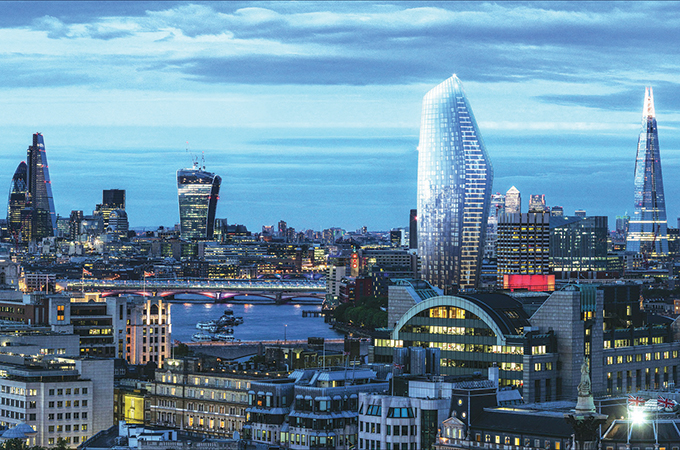 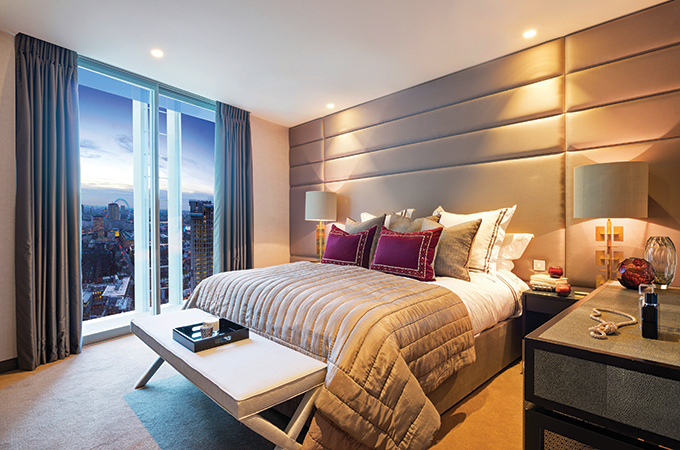 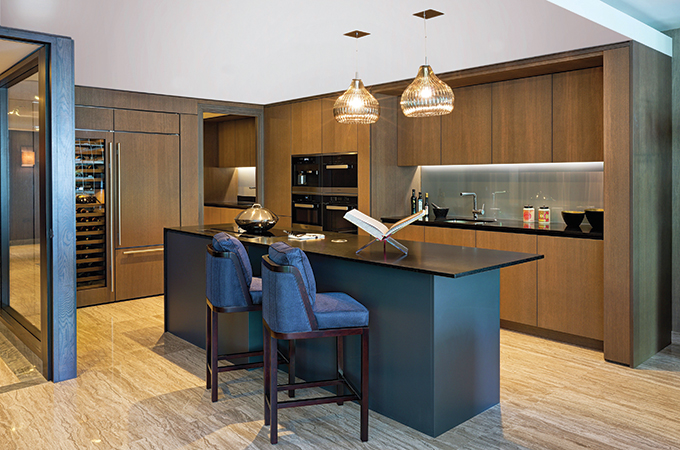 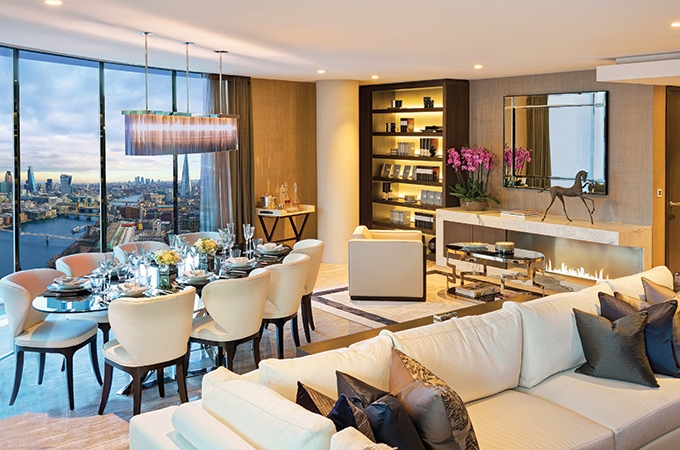 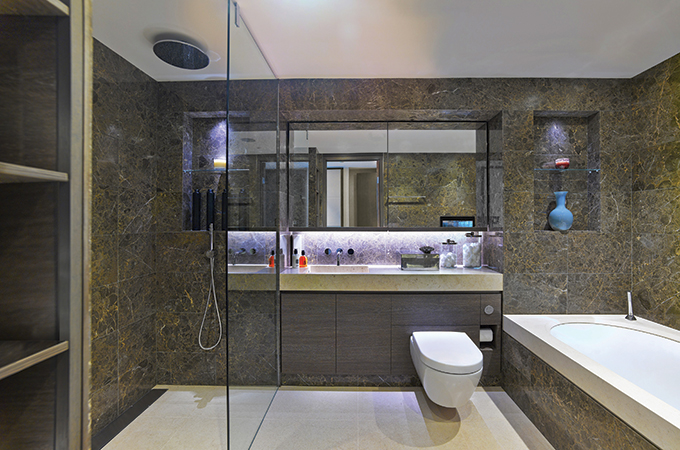