Five exceptionally important Islamic coins dating from the 7th century AD are among the highlights of Morton and Eden’s next sale of Important Coins of the Islamic World in London on April 2.

Collectively these five coins provide vital historic evidence for the birth of a purely Islamic coinage and are estimated to fetch around £700,000 ($1 million)

Morton & Eden’s Islamic coin specialist Stephen Lloyd explains: “These highly sought-after rare coins, two of them gold and three silver, tell the story of the first decades of Islam in a unique way. They show how as the Islamic empire expanded both eastwards and westwards in the 7th century AD, not only were the conquered lands unified through Islamic rule and culture, a pan-Islamic coinage system provided additional cohesion.

“In the early years of the great Muslim conquests, there was no existing tradition of coinage so the rulers simply adapted or took inspiration from what coinage was in use for their own purposes. However after three decades of varying forms of hybrid coins, in 77h the first Umayyad gold dinar was struck heralding the birth of a new purely Islamic coinage.

“Morton & Eden are delighted to be offering these remarkable five coins, which clearly demonstrate how Islamic coins evolved.

“The current market for Islamic coins of great rarity, such as these, is extremely buoyant as proved by the outstanding record price of £3.72 million paid for an Islamic gold coin from the ‘Mine of the Commander of the Faithful in the Hijaz’, which we sold in our Islamic coin auction in October last year. This has been supported by strong results in other recent European sales. Likewise, an exhibition entitled “Coins of Islam: History revealed”, currently on display in Abu Dhabi has aroused further interest,” says Lloyd.

The five coins are:

Lot 1. The first coin is a gold solidus, probably struck in the 680s/60s. These were the first gold coins issued by the Muslims, who had captured large parts of the Byzantine Empire including Syria, Jordan, Lebanon and Egypt. “People living in these provinces had used gold coins like these for centuries and the victorious Muslims showed little inclination to make significant changes. When it came to striking new gold coins the existing Byzantine prototypes were used but any overtly Christian symbolism such as a cross was simply removed,” explains Lloyd. Very few examples of these ‘modified cross’ solidi such as this rarity have survived. Its significance goes beyond its status as one of the first ever gold coins struck by the Muslims, its type served as the genesis and precursor for the reformed, epigraphic, ‘purely Islamic’ gold coinage which came after. (Lot 1 - estimate £60,000- £80,000)

Lot 2. Next in chronological order is an Arab-Sasanian ‘Standing Caliph’ silver drachm, so-called because the reverse shows a standing figure of the Caliph with a sword in hand presenting a striking expression of the power of Islam, although there are clear similarities in imagery between contemporary extant depictions of the Byzantine Emperor. The obverse, with its bust of the Sasanian King Khusraw II wearing a crown, looks to existing silver drachms, which were in circulation in the east. By this time the Muslim conquests had united lands from the Byzantines in the West with the former Sasanian Empire in the East – both areas already had their own distinct, very different coinage. This especially rare coin was in all likelihood struck at Damascus during the reign of Caliph Abd al-Malik in approximately 75H. Damascus, the Umayyad capital, was located at the boundary of these two regions. Thus the new Damascus silver coinage, not surprisingly, shows itself to be a hybrid, taking its inspiration from the traditional coinage of both the Sasanian and Byzantine Empires. (Lot 2 - estimate: £150,000-£200,000).

Lot 3. Another exceptional example from this Arab-Sasanian series is the ‘Mihrab and ‘Anaza’ drachm. This significant silver coin curiously lacks reference to both mint and date, although it is likely to date from around 75H and to have been struck in Damascus. The obverse depicts an armoured bust, a sheathed sword held in his right hand. The inscription written in Pahlawi states the bust is the Sasanian ruler Khusraw. The reverse shows an arch supported on a column (mihrab) in the centre of which is a spear staff, which has since been identified as the ‘anaza’ of the Prophet himself. This has been hailed as the earliest depiction of this important Islamic architectural feature. Scholars have also suggested that the coin might have played a part in the so-called war of images between the Muslims and Christians, or another theory is that as the bust is wearing armour – is the fact that the imagery is overtly military - these coins might have played a practical role as a military coinage. While it continues to intrigue Islamic coin scholars and historians, all, however, are in agreement that this is one of the greatest and most sought-after rarities of its kind. (Lot 3 - estimate: £100,000-£120,000).

Lot 4. The military iconography is even more pronounced in this silver drachm, one of the very last Arab-Sasanian drachms to be issued. Struck at Anbir in 84H during the caliphate of Yazid B. Al-Muhallab, the obverse shows a Sasanian bust wearing a helmet as opposed to the more usual crown. The reverse, however, shows an even more pronounced departure from previous prototypes as it depicts a threatening warrior. The soldier wears chain mail armour and is armed with both a sword and spear. While the warrior is not explicitly identified; he may be the Caliph or perhaps an idealised depiction of a Muslim fighter, it suggests that this coin was not only a practical object, struck from silver taken during campaigns in the East, it was could be considered as a highly symbolic token of Muslim military superiority. From an historical perspective, it also provides an accurate and naturalistic impression of the weapons and equipment of the first century of the Hijri. (Lot 4 - estimate: £120,000-£150,000).

Lot 5. The fifth and final coin in this group is a gold dinar and a very rare survivor from 77H, the first year in which a purely Islamic coinage was struck. Lloyd explains: “Abd al-Malik B Marwan’s introduction of a single, unified and distinctive Islamic gold coinage has rightly been seen as a landmark in the early history of Islam. The gold dinar is beautiful in its striking simplicity and is obviously and uncompromisingly Islamic.” The new Islamic coinage made a clean break with everything that had been used before. Gone were the modified crosses and imperial figural images of the Byzantine and Sasanian Empires, the new gold dinars were purely epigraphic in design, bearing quotations from the Qur’an, which emphasise the oneness of God. This dinar became the basis of a stable gold coinage produced in accordance with the Qur’anic precepts. The type lasted unchanged until the fall of the Umayyad Caliphate in 132h. It is a momentous tribute to the enduring power of Abd al-Malik’s design that three of the four inscriptions used on these first Islamic dinars are also found on the last coins of the Abbasids issued nearly six centuries later. (Lot 5 estimate: £180 – 220,000).

The Morton & Eden auction on April 2 will also feature many other rare and valuable pieces, including a fine selection of coins from the Holy Cities of Makkah and Madinah. 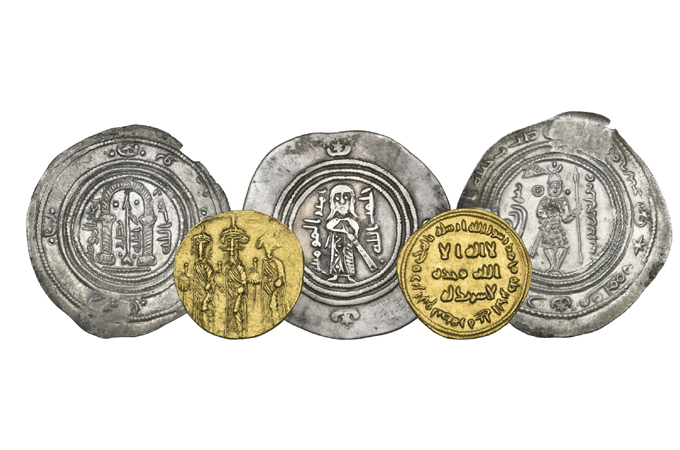