Ali Ahmed Alnaqbi has retired from his position as the Vice President of Finance and Administration at Presidential Flight, Abu Dhabi, UAE, following 25 years of service.

This milestone achievement marks the end of Alnaqbi’s government service this month but extends his commitment to the industry, as his time will now be entirely dedicated to the continued success of the Middle East & North Africa Business Aviation Association (MEBAA).

In his long, illustrious career in the prestigious organisation, Alnaqbi has seen its transition from the erstwhile Private Flight, then to Amiri Flight and onwards to the present Presidential Flight.

Commenting on Alnaqbi’s retirement, Presidential Flight CEO Nadir Ahmed Al Hammadi says: “He [Ali Alnaqbi] is the longest serving member among the top management team and one of the founding members. His successful career at Presidential Flight and his apparent contributions over the years will leave him with pride of achievement.”

Alnaqbi was recently elected as treasury of the International Business Aviation Council (IBAC) and in addition to his seat as a governing member to the board of IBAC and he currently sits on the board of a number of international companies in the business aviation industry.

The year 2006 was indeed a game changing one in his passion and quest for challenging roles in the orderly development of business and private aviation, not only in the UAE but in the entire Middle East and North Africa (Mena) region.  From a modest beginning with 16 founding members, MEBAA has reached 235 members in this short span of under 10 years.

“Although he will be missed as a colleague and a friend, it is comforting to know that his determination and dedication is devoted to improve the business aviation industry through MEBAA will keep him in contact with us and will benefit business aviation community.  We wish him all the best in leading MEBAA to another level of success which will witness significant challenges but there is no man other than Alnaqbi to overcome them” adds Al Hammadi.

Alnaqbi founded MEBAA so that it may act as a single common voice of all members to optimise advocacy on legislative issues to various governments in the region. MEBAA members benefit from this organisations through items like collective risk management methods (MEBAA Aircraft Insurance Scheme (MAIS), providing a platform for effective communication through joint working groups to convey issues peculiar to business aviation operators to the region’s respective regulatory authorities issues such as the GCAA in the UAE and GACA in Saudi Arabia.

MEBAA advocates a safety management culture through IS-BAO and IS-BAH training by qualified IBAC professionals and making available an opportunity for members to fulfill their corporate social responsibility (CRS) through Fly and Feed, a joint venture with the World Food Programme (WFP) under the auspices of United Nations to alleviate hunger from the globe. Both these major initiatives were undertaken under the able leadership of Alnaqbi.

Alnaqbi’s retirement liberates his time so it can be devoted to expanding MEBAA activities in the region. “I will be dedicating my full time towards MEBAA and ensuring its growth and success,” says Alnaqbi.

With the help of its board members, Alnaqbi has led MEBAA into tremendous growth while breaking all barriers for effective communication among the business aviation community. The above has insured that its growth stretched from the far east of the Mena region to its far west, into North Africa where the first edition of MEBAA Morocco Show will be held September this year, in Casablanca.

MEBAA is the official representative of the business aviation industry in the Mena region and is a member of the IBAC.

As part of its current growth strategy, it seeks to implement operational safety and efficiency by providing best in-practice training, lectures and conferences, establishing codes of conduct, and providing industry data.

Today, MEBAA represents over 235 companies and provides a number of products and services to its members, including the MAIS (MEBAA Aviation Insurance Scheme) insurance scheme for operators. In addition to various networking events, MEBAA hosts the MEBAA Show in Dubai, which ranks as the third largest business aviation show in the world. 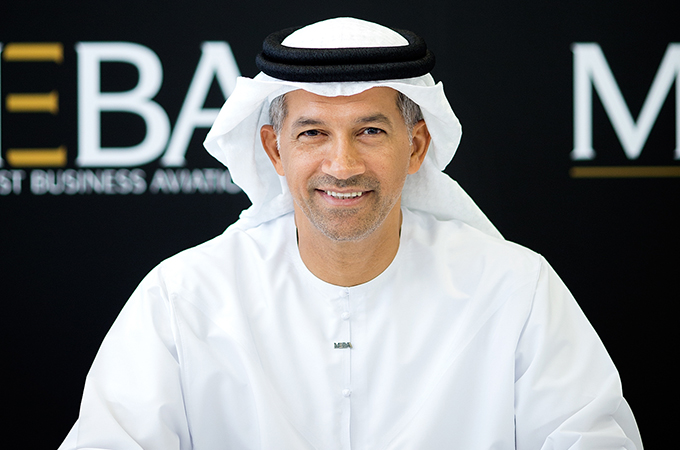