A Sotheby’s sale of impressionist, modern and surrealist art fetched $280.18 million, setting a new record as the highest total for any auction in any category ever held in London.

“Broadening the international reach, we saw an all-time high of 35 countries participating in this field, and collectors from Asia and Russia asserting themselves as a continued force in the market. Undoubtedly it was a great night for Monet, yet we also saw significant depth of bidding right across the sale. The success of the auction reflects the outstanding quality of the exceptionally rare, museum-quality works offered.”

The February 3 evening sale in the UK capital saw 85.33 per cent sold by lot, and five auction records set, led by Étude pour une baignade, Asnières that brought a new auction record for a work on paper by Seurat when it sold for $11.67 million.

The drawing relates to one of Seurat’s greatest paintings, Une baignade, Asnières from 1883-1884, which hangs in the National Gallery, London.

Works on paper performed exceptionally well throughout the night, with ten pieces together bringing £22.11 million ($34.03 million), well above their £14.6 million ($22.48 million) high estimate.

The sales were led by a stunning offering of five works by Claude Monet all of which sold, together totalling $83.76 million.

From the collection of the Museum of Modern Art, New York, and on offer for the first time at auction, Les Peupliers à Giverny fetched $16.21 million.

Toulouse-Lautrec’s Au Lit, Le Baiser from 1892 brought $16.21 million, the second-highest price for the artist at auction. The work had never been offered at auction, and had not been exhibited publicly for more than four decades.

Top-tier pieces by Toulouse-Lautrec are exceptionally rare on the market – only three works by the artist have ever appeared at auction estimated at this level. 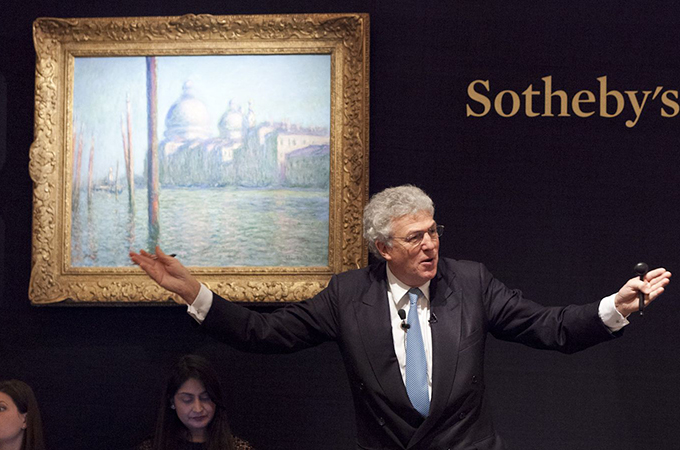