A stately coach commissioned by King William IV of the UK is expected to fetch close to half a million dollars an upcoming auction.

The ex-Royal British Mews landau once featured in a collection described by Prince Philip, the Duke of Edinburgh, as “the pride of North America”.

It is among the highlights of Bonhams’s Carriage Collection sale, taking place in Oxford, on March 7.

Painstakingly assembled by a European industrialist, the privately owned Carriage Collection contains more than 150 lots, with some dating back to the 17th century.

Never before exhibited, the Bonhams Sale will be the first time the collection is available for public view, with several lots coming to auction for the first time.

"During the past 30 years this fascinating collection has been lovingly maintained and painstakingly restored - and occasionally used in international carriage competition - by their Dutch owner,” said Rob Hubbard, Bonhams Motoring Specialist. “It’s quite rare for such a vast single-owner collection of this quality to come to market, so it has attracted some great international attention.”

This outstanding carriage has been the subject of one of the most impressive restorations carried out in recent years.

Adams and Hooper was founded in 1805 and soon built up a reputation for building the finest carriages. From their premises in Haymarket, London, carriages were built for wealthy patrons the world over. By 1830 the company held the Royal Warrant.

Travelling landaus or horse-drawn four-wheeled carriages were used by nobility on extended tours throughout Britain and Europe. Designed to carry their owners in comfort over long distances they proved to be an ideal carriage prior to the introduction of the railways.

Ordered by the Royal Mews from Adams and Hooper for King William IV, who reigned from 1830 until his death in 1837, the landau was delivered in 1835.

The carriage would have been used by trusted representatives and possibly the King himself when undertaking long journeys.

The landau was sold by the Royal Mews in the early part of the 20th century. Eventually it was acquired by the American collector James Coson and is featured in a book of his collection published in 1989, complete with a foreword from His Royal Highness Prince Philip. When the Coson collection was sold, its new owner sent to carriage to renowned restorers Stolk of Holland who returned the landau to its former grandeur.

The landau is resplendent in its Royal colours of red under carriage with gold leaf lining and black flank detail, deep royal claret body panels with Royal crests and insignia and leather front and rear boots.

Mounted on 'C' springs with leather braces, the body has additional rope through braces allowing the carriage to cope with the roughest of roads. Strong grease axles are fitted and the landau runs on iron shod English pattern wheels.

Access to the passenger compartment is made via double folding steps and doors from either side.

Inside the carriage the seat cushions and back are upholstered in a deep blue brocade with surface buttoning. The doors, seat falls and hood linings are finished in a dark blue wool cloth, and beautifully woven bespoke 3-inch broad laces are used to edge the cushions, door surrounds and glass strings.

Each door contains a blue wool cloth trimmed window and separate shutter with a brass maker’s name plate. The louvres for each shutter can be adjusted by a small brass ratchet set into the varnished frame.

Externally the landau has been beautifully coach painted, period coach painting books often describe the finished panels of carriages as having a 'glass like depth' to them and ground pumice would have been used to polish out small particles of dust.

The panels on the landau are a true reflection of the finish achieved by the very best coach painters some 150 years ago. The lower claret body panels and doors feature hand painted royal coats of arms and insignia detail. Each will have been painted directly onto the panel by hand and will have taken several hundred hours to complete; they have then been varnished over for protection.

To the front of the carriage there is a leather covered 'Salisbury boot' adorned with four brass crowns, access is via the front hinged lid and it would have been used to store spares for the coach and harness when travelling.

Beautifully detailed lamps are attached directly to the front folding hood, they have been silver plated internally and have a small royal crown on each candle font, larger brass crowns sit atop each lamp.

The folding leather hoods are held in position by black hood jacks and three brass royal insignias are fitted along the top edge of each hood side panel.

To the rear of the main body there is a leather covered 'sword case'.

At the back of the landau there is a Rumble seat where two footmen would have sat.

The undercarriage is finished in red with gold leaf detail, on each corner there is a large 'C' spring. Hand stitched leather braces run around the outside of each spring to support the body, the height of which is adjusted on large ratchet adjusters. Additional leather covered rope bracing runs the length of the landau to control the front to back movement of the body, whilst on the underside of the body there are two further leather straps that control the side to side 'sway'.

Hanging from the perch there are three separate devices to control the landau when descending or ascending hills and stopping.

The first is a drag shoe that would have been used as a skid to lock up the rear nearside wheel when descending a hill.

The second is the small hinged red pole, called a drag staff that would have been lowered onto the ground when ascending a hill, if the landau had to stop for any reason the pole would have dug into the road surface to stop the carriage from rolling back.

The last item is the leather covered hook, this would have been used as a parking brake with the hook placed around a wheel spoke.

The landau is a truly wonderful piece of early Royal transport and the restoration work carried out to return it to its former glory is unlikely to be ever repeated again, says Bonhams. 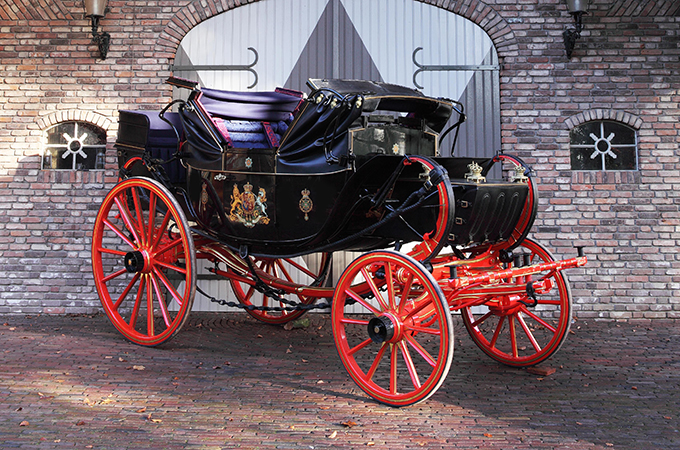 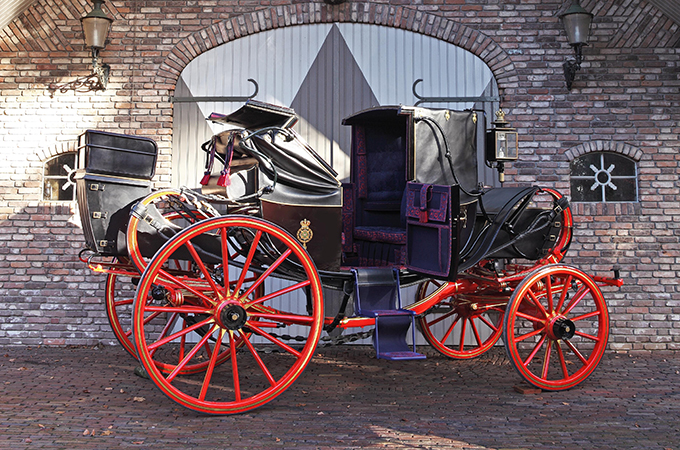 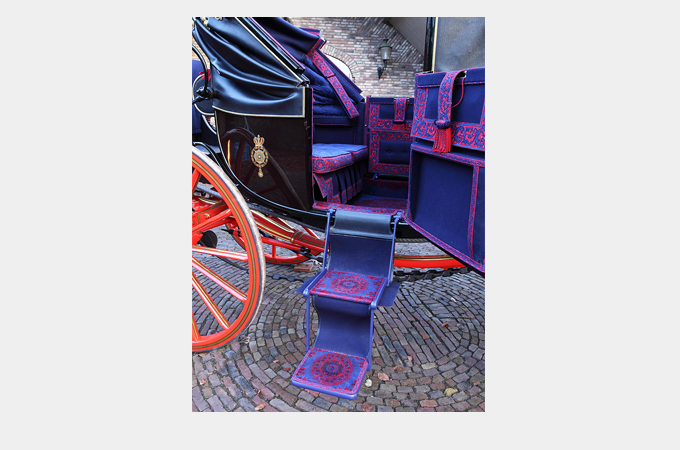 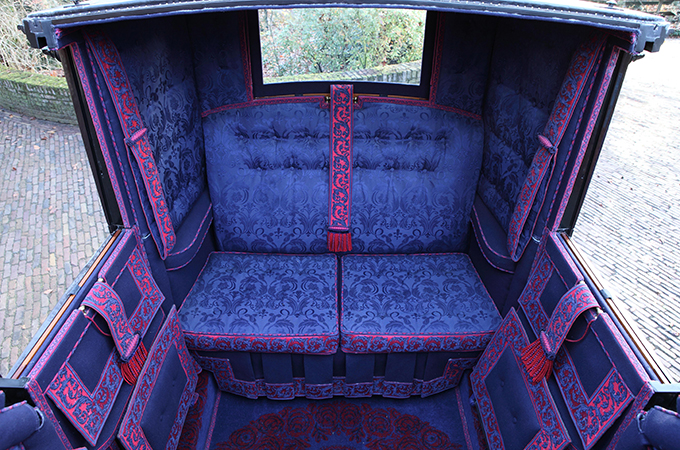 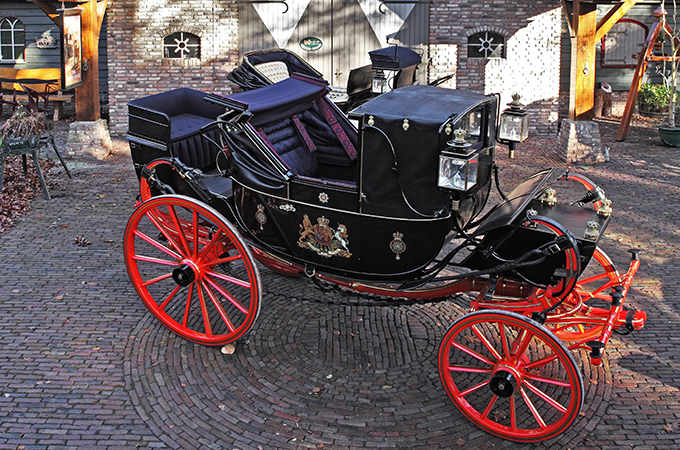 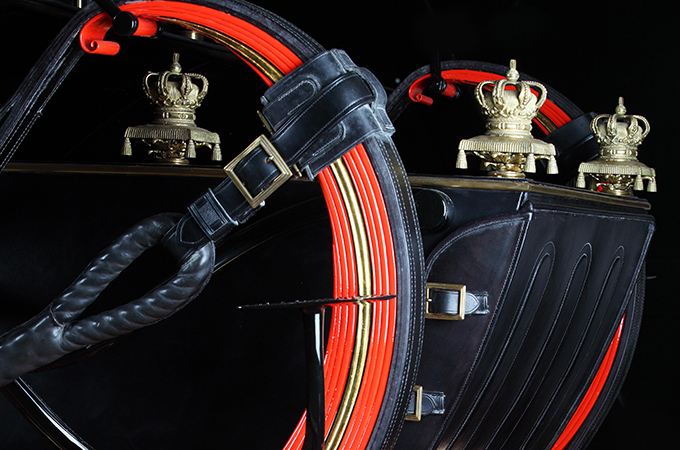 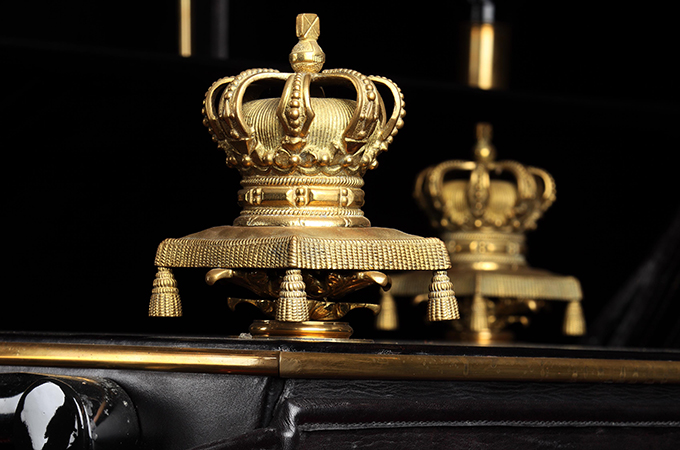 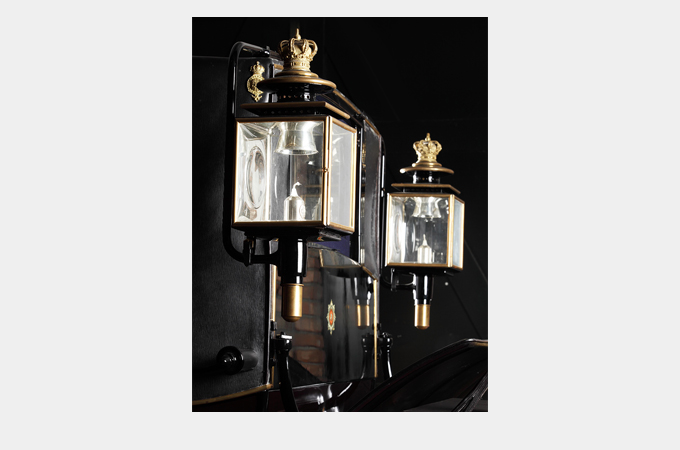 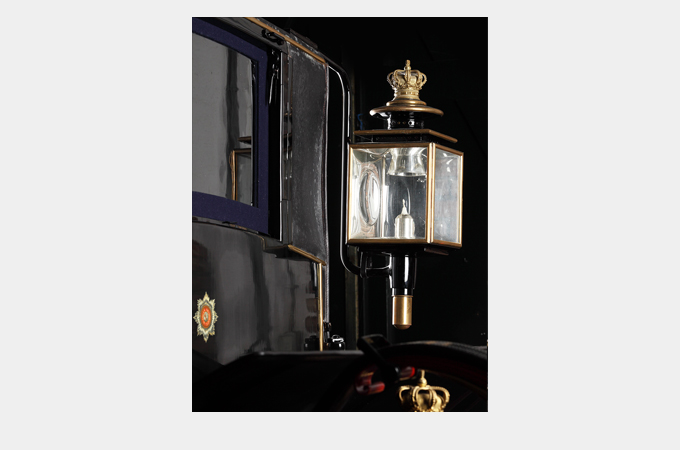 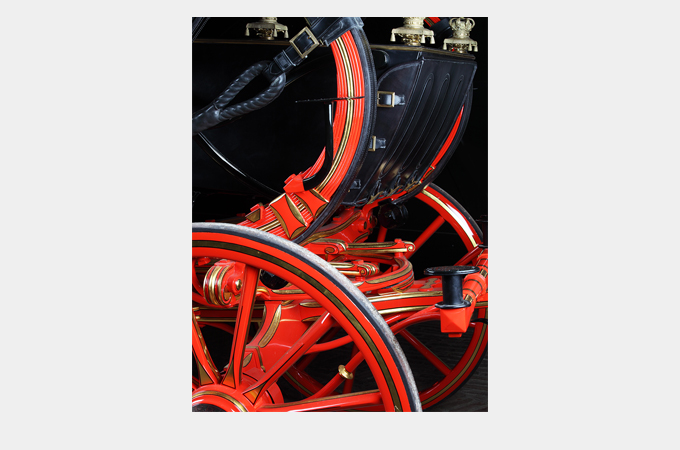 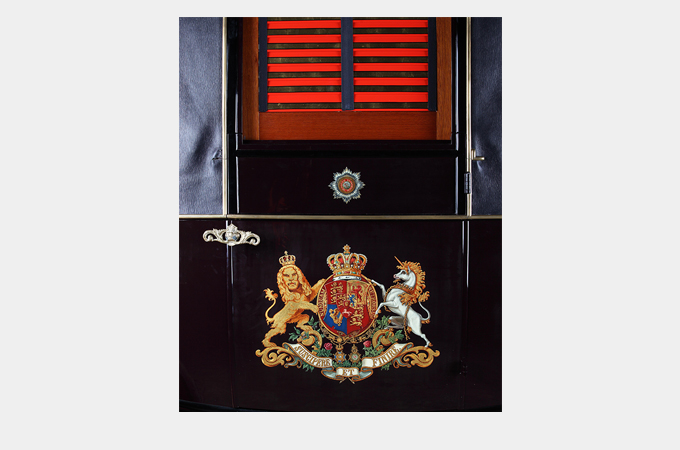 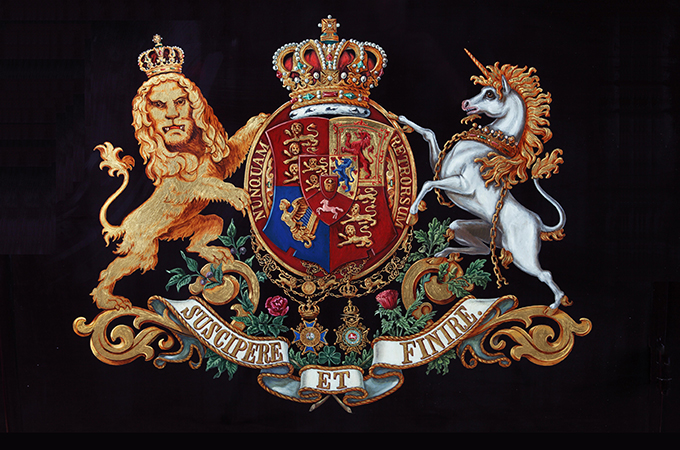 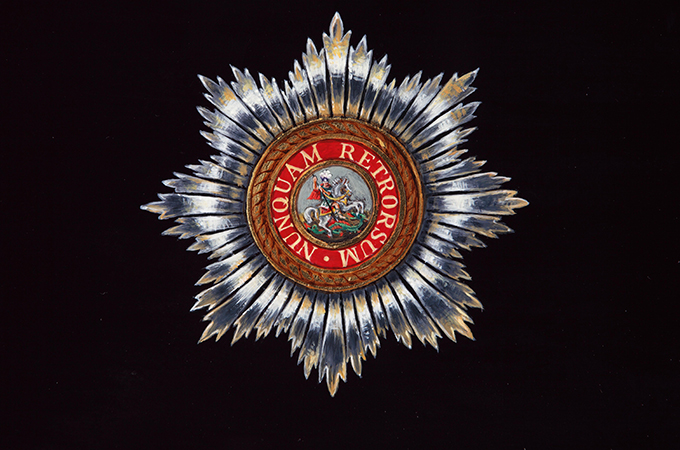 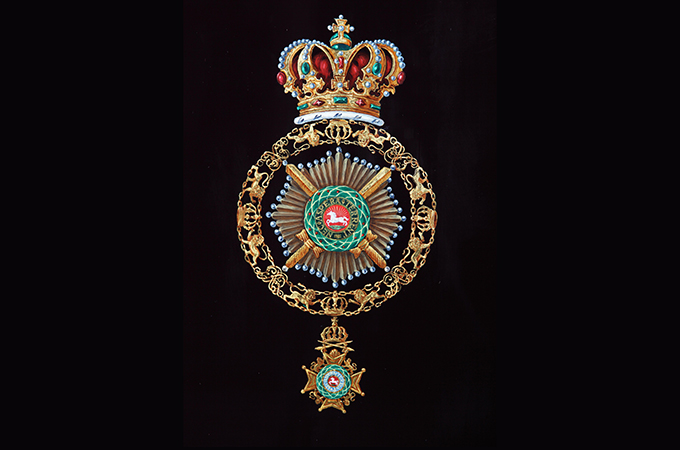 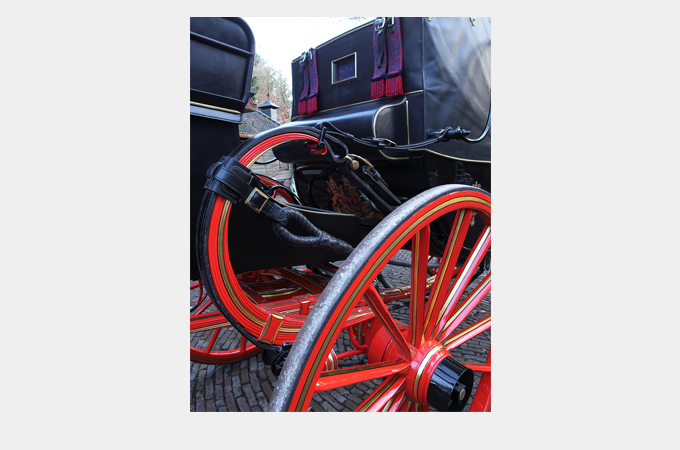 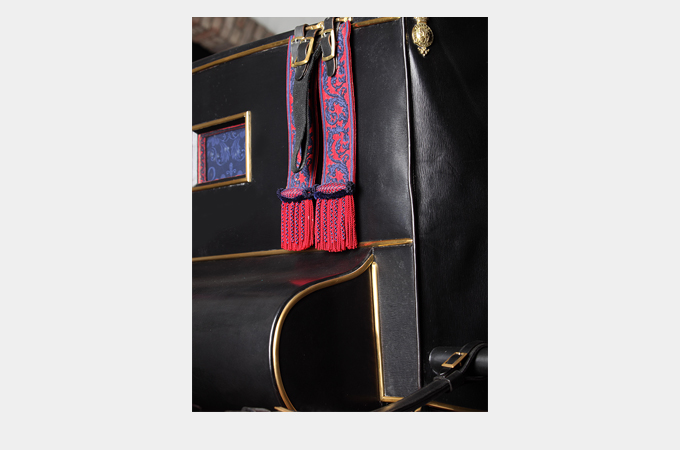