Benetti continues to dazzle the yacht industry with the launch of its second giga yacht, another example of its enthralling creations

It is the second of three giga yachts to be unveiled in less than two months and is another example of Benetti’s excellence.

Built at Benetti’s Livorno shipyard, FB272 is a steel yacht with an aluminium superstructure built to comply with the PYC (Passenger Yacht Code) with a significant contribution of the owner to the conception and development of the specification, general arrangement and exterior design at the outset of the build.

FB272 has been built to the unique taste of a very experienced owner in luxury yachts – who has from the start of the project made available the Burgess Technical Services team, a full-time, highly-skilled and dedicated technical and project management team, which has brought its significant experience and expertise in luxury yachts to the project.

FB272 has a displacement of above 5,500 GT, a length of about 100 m and a beam of 17 m. The yacht is fitted with a pioneering hybrid propulsion system with diesel-electric engines and two Azipods propulsion units connected to a special battery pack conceived and provided by the owner for total vibration-free navigation in absolute silence.

Prior to going to contract, the owner spent significant time in the development of the exterior design, initially with Hugo van Wieringen from Azure Naval Architects and then with the assistance of Reymond Langton Design and Zaniz Jakubowski of Zaniz Interiors. The exterior design was refined post contract with the assistance of Benetti’s in-house designer, Giorgio Cassetta, supporting Zaniz Interiors who took over responsibility for both the exterior and interior design of the yacht.

FB272 is impressively high and massive, offering a new sense of proportion and demonstrates the huge scope of imagination and build capacity at the Italian shipyard. She features an advanced Lutron domotic system – approximately 500 km of cable run across her hull and superstructure. Despite this hi-tech soul, she provides masses of connection with the outside world: the huge windows with a 3-m height offer an incredibly extensive glazing which floods the interior with light, thanks to an outstanding surface of 800 sq m of window glass.

FB272’s exterior lines, which include six decks, were created by the owner, Reymond Langton Design and Zaniz Jakubowski and further developed by Benetti into a buildable 3D model. A straight bow offers brilliant seakeeping credentials, while a huge forward deck area brings guests a thrilling vantage point from which to cruise and relax. The main deck offers further dining and social spaces, sheltered and shaded by the graceful overhang of the beautifully styled superstructure. Above this is the wheelhouse and above again is a charming, private deck leading towards the helicopter pad.

High swathes of glass wrap the main decks, with the hull featuring a long horizontal strip of glazing from mid-ship to stern. Windows on the upper decks are entirely uninterrupted by structure, giving each deck a floating appearance. 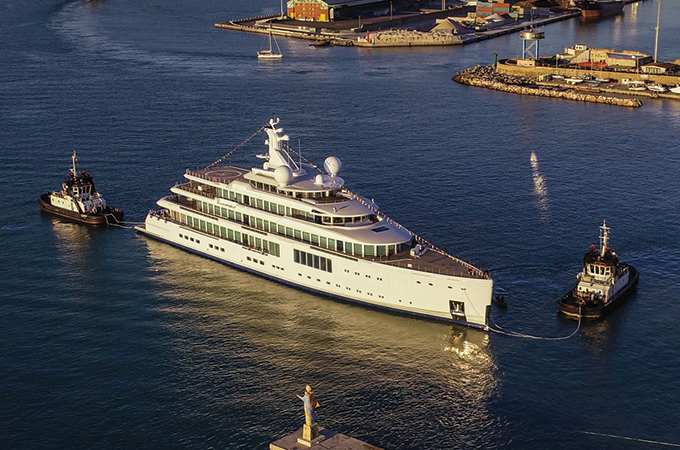 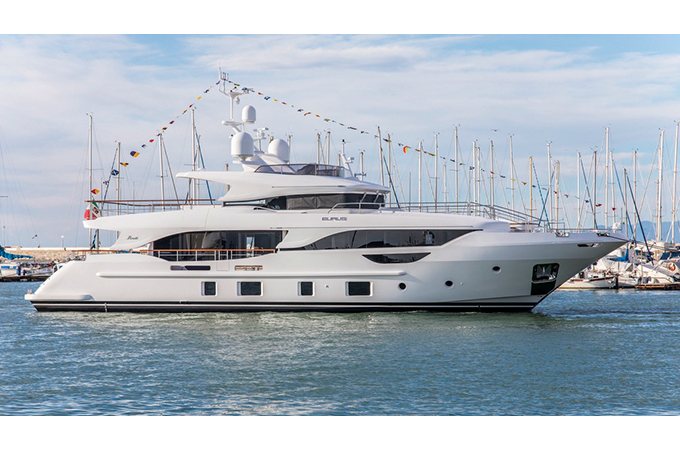 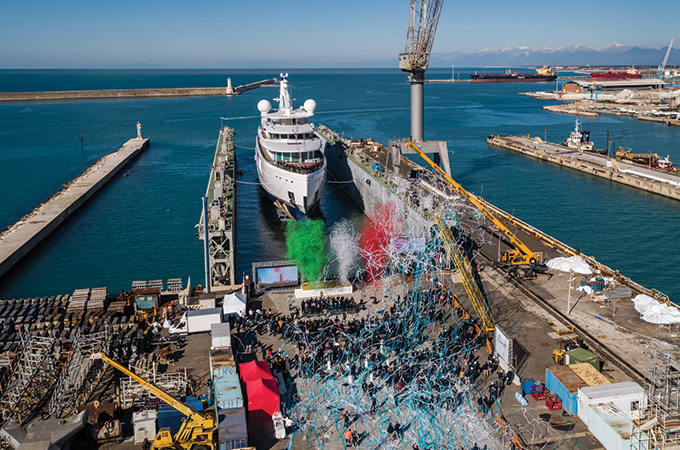