Two impressive diamond fringe necklaces weighing a total of 152.50 carats along with a 23.13 emerald-cut diamond ring - all signed by Harry Winston - are set to go under the hammer at Bonhams Fine Jewelry sale in New York this month.

The sale, which takes place on September 21, features 191 lots of fine jewellery including Colombian emeralds, Kashmir sapphires and rare pieces from the Art Deco era.

Among the many jewels with fascinating provenance being offered to Bonhams clients will be a remarkable collection of jewellery owned by the Olympic gold medalist Katherine Domyan.

Leading the sale are two necklaces formerly owned by the swimmer. The first is a diamond necklace by Harry Winston, the great American jeweller, estimated at $350,000 to $550,000. Dated 1984, the choker-length platinum necklace is designed as a double line of graduating round brilliant-cut diamonds, suspending a fringe of pear-shaped brilliant-cut diamond drops, and has a total diamond weight of 86.30 carats.

According to Bryan Domyan, Katherine’s son, his mother used to love wearing not one but both these necklaces together when attending red carpet events and presidential dinners. “They made quite the statement.”

Staying with diamonds, Bonhams will also be auctioning a diamond ring by Harry Winston. The rectangular emerald-cut diamond, weighing 23.13 carats, has an estimate of $250,000 to $350,000 and also hails from the Domyan collection.

Another impressive diamond piece to feature in the sale is a diamond necklace by Oscar Heyman. Heyman was known as the 'jewellers’ jeweller,’ the brand synonymous with dazzling, high-style jewels. This necklace is a rare example of one of the jeweller’s creations from 1968. It is designed as a graduated cluster set with marquise, pear and round brilliant-cut diamonds and is estimated at $80,000 to $100,000.

Three notable lots featuring Columbian emeralds will also go under the hammer. The first lot, a pair of emerald and diamond pendant earrings, signed Bulgari, is estimated at $200,000 to $300,000. Set with two cushion-shaped brilliant-cut emeralds drops, they weigh 10.27 and 9.11 carats, respectively. The earrings are accompanied by Gubelin reports stating the emeralds are of Colombian origin with minor clarity enhancement.

The second lot is a magnificent diamond and emerald ring. Set with an emerald-cut diamond, weighing 4.92 carats, and a rectangular-shaped emerald, weighing 3.10 carats, it is estimated at $80,000 to $100,000. It is accompanied by an AGL certificate stating the emerald is of Colombian origin with indications of insignificant, traditional clarity enhancement.

The third lot is an impressive emerald and diamond ring. Centring a rectangular-shaped emerald, weighing 14.60 carats, and flanked by baguette-cut diamonds, it is estimated at $70,000 to $100,000. It is accompanied by an AGL report stating the emerald has insignificant, traditional clarity enhancement.

Famed sapphires from Kashmir continue to appeal given their rarity and exceptional colour so Bonhams will bring to auction a sapphire and diamond ring estimated at $80,000 to $120,000. Centring a cushion-shaped sapphire, weighing 3.94 carats, framed by old European-cut diamonds, the sapphire is accompanied by an SSEF and an AGL report stating it is of Kashmir origin with no indications of heat or clarity enhancement.

Art Deco jewellery continues to be in high demand with rare pieces regularly performing well at Bonhams sales in London, New York, LA and Hong Kong. This forthcoming auction features a number of pieces from the 1920s including:

* An Art Deco diamond, emerald, ruby and onyx bracelet estimated at $30,000 to $50,000. Dated circa 1925, the bracelet has a flexible geometric design, typical of the Art Deco era, and is decorated with calibré-cut rubies, emeralds, old European-cut diamonds, framed within a buff-top black onyx border.

* An Emerald and Diamond Bracelet by Tiffany & Co estimated at $12,000 to $15,000. Dated circa 1925, the bracelet features a cushion-shaped cabochon emerald, weighing 8.30 carats, flanked by similarly cut emeralds, weighing approximately 7.50 and 6.90 carats. Its ornate band is stylishly set with French and old European-cut diamonds.

Katherine Domyan’s much loved 36 pieces of David Webb jewellery will also feature in the New York sale. These include Webb’s iconic animal bracelets adored by women globally. Diana Vreeland, the famous Vogue editor-in-chief, had the same type of zebra bracelet Katherine owned, and one of Katherine’s most dazzling jewels by Webb to be auctioned is an emerald and diamond necklace, estimated at $80,000 to $120,000. 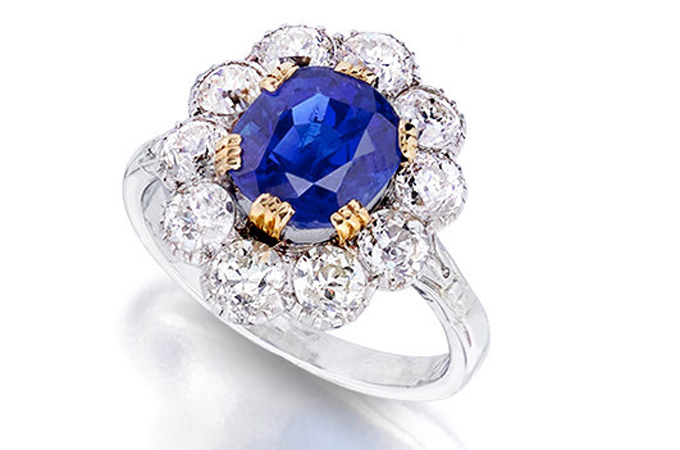 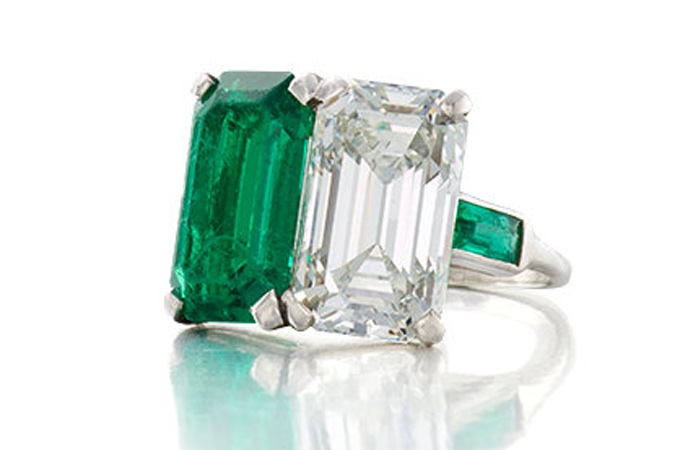 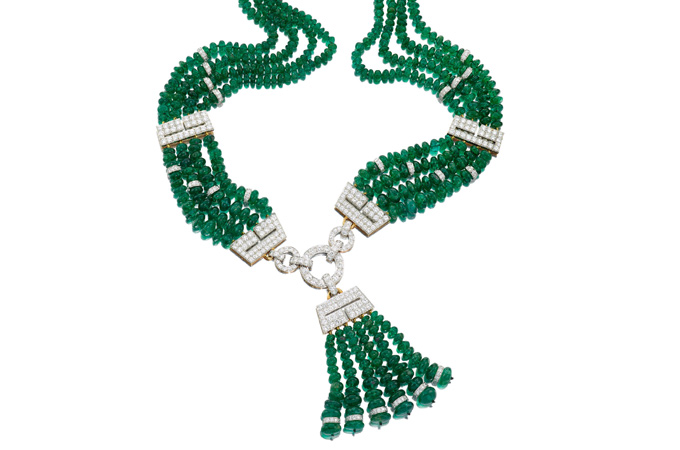 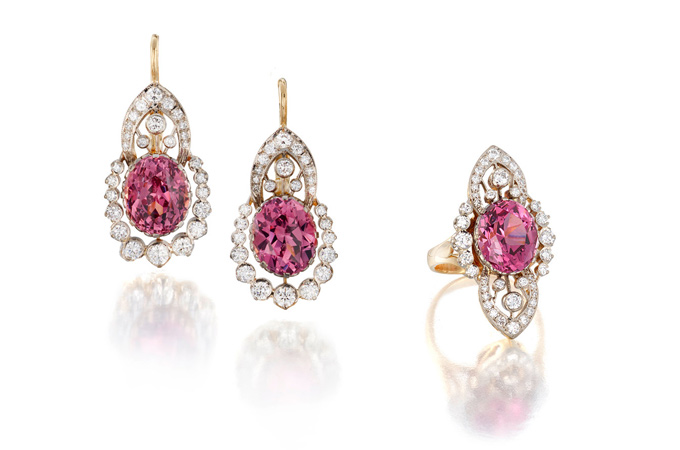