The region’s leading cultural retailer, Gallery One, recently opened its new store in Harvey Nichols at the Mall of the Emirates in Dubai, with artworks by famous marine artist Alastair Houston.

Exclusively showcased as part of a capsule exhibition in store, alongside photographs by Wilfred Thesiger, Houston’s latest collection ‘Sea of Dreams’ features stunning scenes of the Arabian Gulf and Dubai.

A collection of water colours, Sea of Dreams is a celebration of the sea-faring heritage of the UAE and features some of the country’s most iconic landscapes to mark the UAE Year of Zayed, 2018.

An accomplished mariner, Houston was given privileged access aboard traditional racing dhows off the coast of the UAE. From here, he has sketched many of the iconic scenes featured in these paintings.

“Sheikh Zayed’s legacy to preserve the culture and heritage of the UAE has been the main focus of my paintings over the last 14 years. It’s very inspiring to not only see that preservation happening but also growing. The dhow racing scene has become a greater spectacle than ever before. The sea has a unique way of humbling all men and you can see this in the many participants returning to the tradition,” he says.

Born in 1965 in Scotland, Houston was brought up in the village of Fairlie on the Clyde Estuary on Scotland’s west coast and he began sailing from an early age. A chance meeting with a classic yacht enthusiast gave him the encouragement to hold his ﬁrst exhibit of work in 1989 and launch his career in the marine art ﬁeld.

“I love oil painting, but I specialise in watercolour. It’s tricky to start, but once you master it you’ll enjoy it.  To be honest, I’m still learning, and every time I see artworks from masters in this medium I am simply in awe. My style is quite representational, and I always try to add extra dimensions to enhance each subject, either by adding colour saturation or adding an exaggerated atmosphere to create the mood of the scene.

“Generally, there has always been water in my scenes as I have specialised in the marine art field. Water is a tricky subject to deal with, but I like the challenge of it. Lately though, I’ve been pleased with some other ventures including scenes of the Arabian Oryx and desert scenes, I’m keen to do some more ventures into the desert,” says Houston.

Houston has been commissioned for many different types of paintings in the UAE. For example, a portrait of Sir Baniyas Island in several paintings for the Abu Dhabi Tourism Authority, a large commission for Palm Jumeirah, and many other private commissions.

“I knew I couldn’t just arrive for a few weeks and cover the subject of dhow racing. It was an entire year of research on sailing, meeting the owners of boats and dhow building yards just for the first exhibition.

“Understanding exactly how these vessels work is key to getting the right technical detail which I include in the works. It needs to look right and often this is overlooked especially in marine painting. I have been very lucky to have been invited to join many of the dhow races and meet boat builders and sailors, though it wasn’t till after 14 years I was given the privilege of my first shot at the helm by a very kind Adil Kalid, the UAE’s famous world sailor, aboard his 60 ft racing dhow, during practice I might add!” 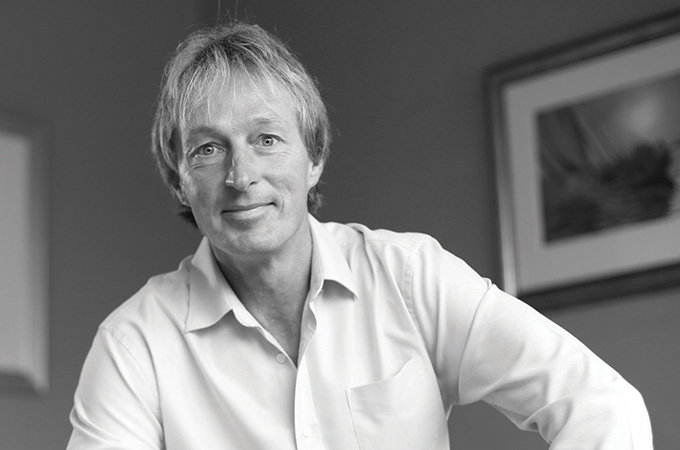 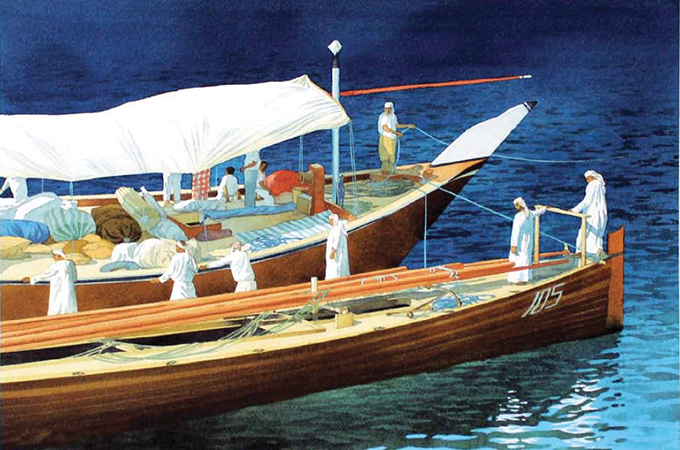 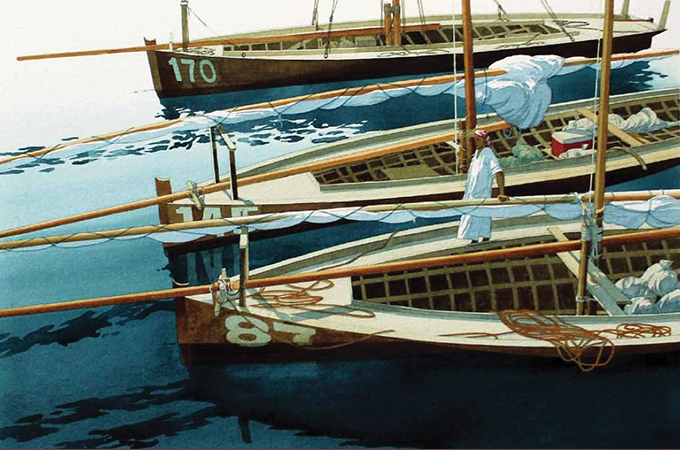 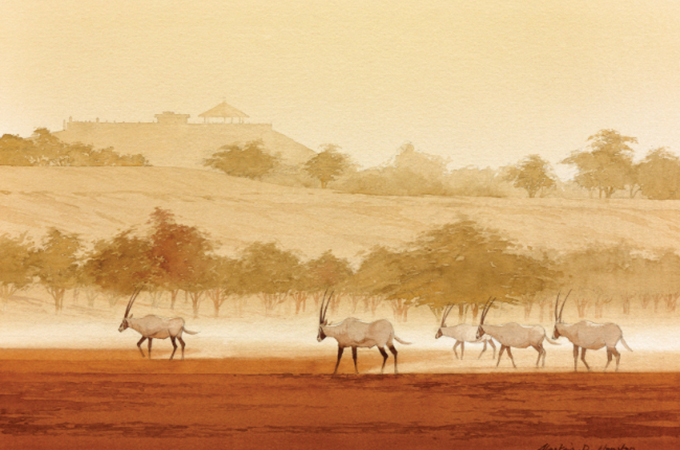 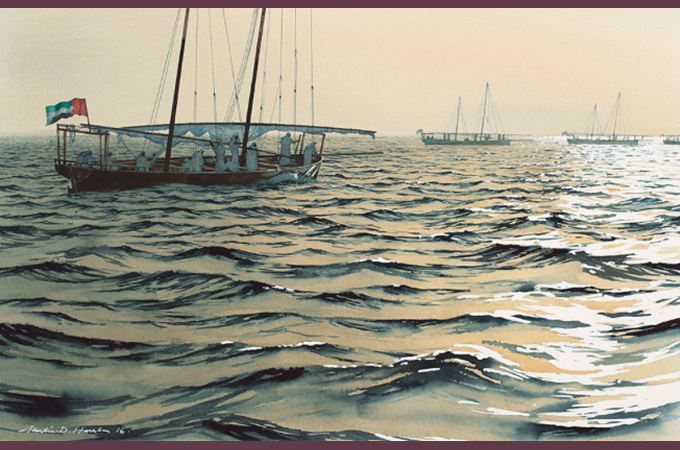