Art & Auctions
Magic of opera beneath the Pyramids

Egypt will once again create history by bringing together two of its most illustrious icons for the biggest event of the year; “Opera Aida” beneath the Great Pyramids of Giza.

Written by legendary Poet Antonio Ghislanzoni and composed by the celebrated Italian Composer Giuseppe Verdi, “Opera Aida” debuted in 1871 under orders from Ismail Pasha – Khedive of Egypt – in celebration of the opening of the Suez Canal. The result was an amalgamation of civilisations through time and space, and a masterpiece that is nothing short of spectacular.

Of all the repertories about star-crossed lovers and love found and lost, “Aida” creates the most formidable, sensitive orchestra and chorus ever written, let alone performed. When two lovers are faced by the wrath of war, prejudice, and unsung love, the lengths they take and the confrontations they undergo so they can finally be together are incredibly intense, restoring faith in even the most disbelieving.

Guests can look forward to an unforgettable experience as the crew and live orchestra transport them into a realm of strength and delicateness, passion and craftsmanship all at once. The magnificent setting at which the event will be hosted adds the Midas touch to this one-of-a-kind spectacle.

Accommodating up to 5,000 attendees under the star-spangled skies of Cairo, the sensational “Aida” will be performed on March 8 and 9.

As the event’s sponsor and a passionate supporter of tourism in Egypt, Four Seasons Hotel Cairo at Nile Plaza, will provide a refined detail to a prestigious event. 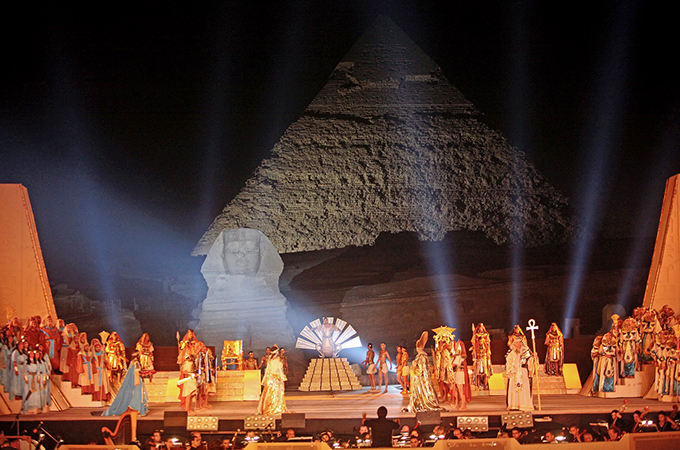