When Jussi Pylkkänen, Christie’s Global President, brought the hammer down on Lot 9 during a November auction in New York, the art world was awe struck. Leonardo da Vinci’s ‘Salvator Mundi’ had made history for its stunning price.

The rediscovered masterpiece by the Renaissance master was sold for an historic $450.312 million, obliterating the previous world record for the most expensive work of art at auction (Massacre of the Innocents by Peter Paul Rubens, which sold for $76.7 million in 2002).

Now the grapevine was abuzz on who bought the painting at that enormous cost. Several names from the Middle East did the rounds in the following days before Abu Dhabi’s Department of Culture and Tourism announced that it had bought the painting.

The work, hailed as one of the greatest artistic rediscoveries of the last 100 years, will go on display at Louvre Abu Dhabi, alongside another da Vinci masterpiece, La Belle Ferronnière, which is currently on loan from musée du Louvre.

Dating from around 1500, it is an oil on panel painting depicting a half-length figure of Christ as Saviour of the World, facing the viewer, and dressed in flowing robes of lapis and crimson. The figure holds a crystal orb in his left hand as he raises his right hand in benediction.

This huge price reflects the extreme rarity of paintings by Leonardo da Vinci – there are fewer than 20 in existence acknowledged as being from the artist’s own hand, and all apart from ‘Salvator Mundi’, a depiction of Christ, are in museum collections.

The inclusion of ‘Salvator Mundi’ in the National Gallery’s landmark 2011-12 exhibition of Leonardo’s surviving paintings – the most complete display of such works ever held – sealed its acceptance as a fully autographed work by Da Vinci. This came after more than six years of painstaking research and inquiry to document the painting’s authenticity. It was a process that began shortly after the work was discovered – heavily veiled with overpaints, long mistaken for a copy – in a small, regional auction in the US in 2005. Prior to that, it was consigned to a 1958 sale at Sotheby’s where it sold for £45 ($63). 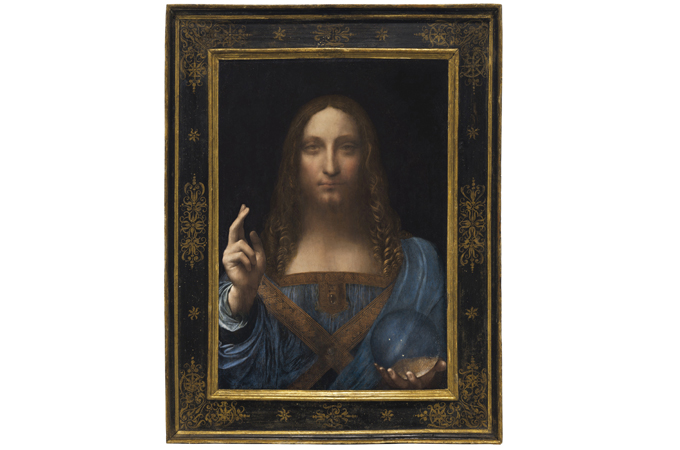