France’s Dassault Aviation has rolled out its new flagship jet and announced that the Falcon 8X’s first ever flight will take place early next year.

The ultra long range Falcon 8X is the company’s new flagship and the latest addition to the growing Falcon business jet family.

It was unveiled at Dassault’s Bordeaux-Merignac facility on December 17 before an audience of customers, operators, industrial partners and representatives of certification authorities.

The 8X will offer the greatest range and the longest cabin in the Falcon line, along with the most extensive selection of cabin configurations available on any executive jet, according to Dassault Aviation.

Announced in May of this year at European Business Aviation Convention & Exhibition (Ebace) in Geneva, Switzerland, the Falcon 8X builds on the advanced performance and technological prowess of the popular 7X long range trijet, the most innovative and fastest selling Falcon ever.

The 8X will offer a range of 6,450 nm (11,945 km) – and a cabin 3.5 feet longer than the 7X while affording the same low operating economics and remarkable operating flexibility for which all Falcons are known.

“Dassault’s tradition of innovation and excellence helps explain the success of the Falcon 7X. More than 250 aircraft have been built in the seven years since service introduction, and demand remains strong. We anticipate a similarly bright future for the 8X.” said Eric Trappier, Chairman and CEO of Dassault Aviation.

Final assembly and testing of the 8X is taking place at the state-of-the-art Charles Lindbergh hall at Merignac. The facility was built to handle production of the Falcon 7X, and the 8X will draw on the same advanced digital design and manufacturing techniques pioneered with the 7X.

More than 8,000 Dassault civil and military aircraft, including 2,300 Falcons, have taken to the air from Mérignac since it opened in 1949.

Wing mating and engine installation on the first Falcon 8X were completed in July and first power up occurred shortly after. Ground tests, including flight control system testing, vibration tests and fuel system testing, concluded in November. The first engine run up took place in early December and the aircraft is on track for a maiden flight in the first quarter of 2015.

“We are extremely happy with progress on our new Falcon flagship,” says Olivier Villa, Senior Vice President, Civil Aircraft, Dassault Aviation. “The programme is right on schedule and all systems are performing exactly as designed.”

A total of three aircraft, including one fully outfitted with a cabin interior, will be used in the flight test and certification campaign. Deliveries are expected to begin in the second half of 2016.

More than 30 configurations will be available. Customers will be able to choose from three galley sizes - two with a crew-rest option – and lounges of varying lengths capable of supporting a range of lavatory layouts, including a lavatory with shower.

With eight passengers and three crew, the jet will be capable of flying 6,450 nm at Mach.80 non-stop. It will be powered by an improved version of the Pratt and Whitney Canada PW307 engine that equips the Falcon 7X. Combined with improvements to wing design, the new power plant will make the 8X up to 35 per cent more fuel efficient than any other aircraft in the ultra-long range segment, affording a corresponding savings in operating costs, says Dassault Aviation.

The 8X will be equipped with a panoply of innovative onboard systems largely proven on the 7X, including an enhanced version of the 7X’s Digital Flight Control System. It will also come with a redesigned cockpit featuring an optional combined synthetic/enhanced vision head-up display.

Like the 7X, the Falcon 8X will be capable of approaches up to 6 degrees, allowing it to serve challenging airports such as London City Airport and Lugano (Switzerland) that are normally not accessible to large cabin aircraft. The aircraft will have a balanced field length of about 6,000 ft and an approach speed at typical landing weight of 107 kts.

The 8X will also be able to perform an extensive list of one-leg missions, including Beijing to New York, Hong Kong to Seattle and New York to Dubai.

Dassault Aviation is a leading aerospace company with a presence in over 80 countries across five continents. It produces the Rafale fighter jet as well as the complete line of Falcons. The company employs a workforce of over 11,000 and has assembly and production plants in both France and the US and service facilities around the globe. Since the rollout of the first Falcon 20 in 1963, over 2,250 Falcon jets have been delivered. 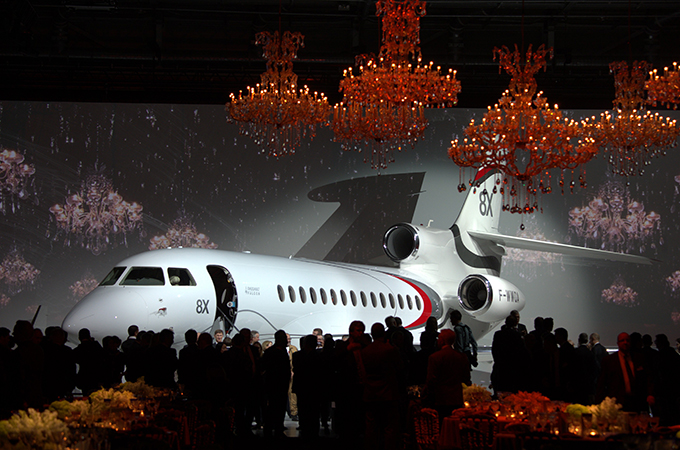 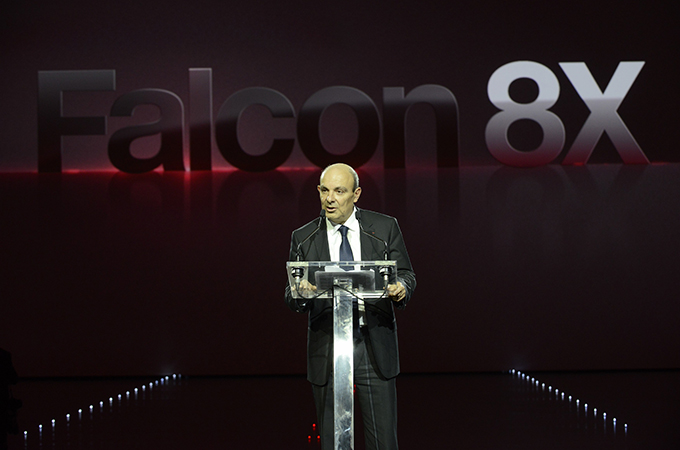 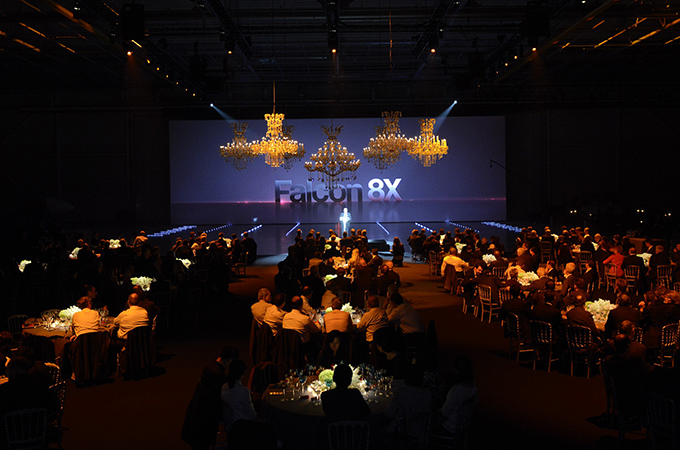 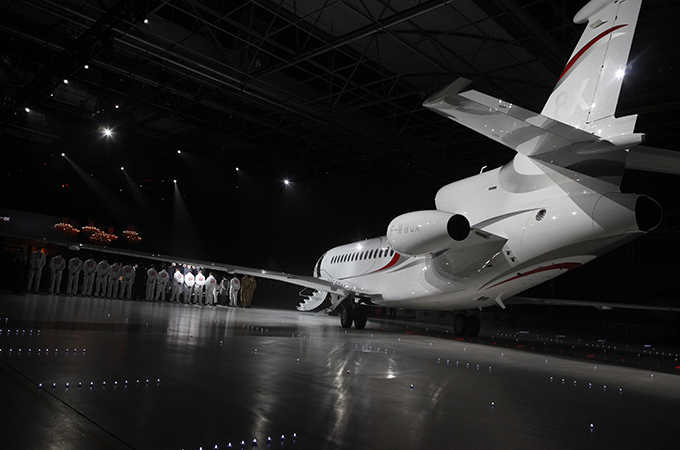 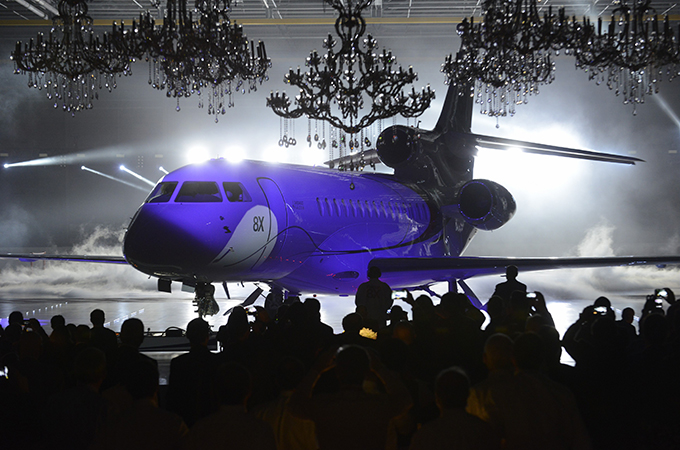 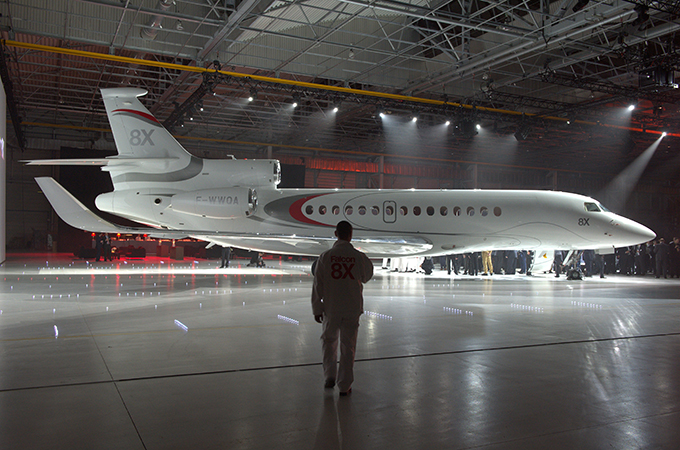