Dassault Aviation recently delivered its 2,500th business jet, marking yet another landmark event in the storied saga of the Falcon line.

The aircraft, a Falcon 900LX, was handed over at the Little Rock Completion Center to a long-time Falcon customer based in the US.

The delivery represents a significant milestone for both the company and the Dassault Falcon line.

The first Falcon was delivered in 1965, and in the half century since the Falcon 20 introduced executives to business jet travel, operators around the globe have been attracted by the passion for excellence, quality and technological innovation reflected in the brand, Dassault Aviation says.

With a generation of improvements, Falcons have remained the industry standard, from the first Falcon 20 up to today’s new Falcon 8X ultra-long range trijet, which expands the range and size of the family while offering industry leading digital flight control and sound proofing capabilities.

With the addition of the all-new Falcon 5X ultra wide body twinjet, set to enter the market in 2020, the Falcon line will cover the complete range of large cabin business aviation requirements, from super midsize on up.

”Over the half century it has been in operation, the Falcon fleet has amassed an amazing 17.8 million hours of flight time with some 1230 operators in 90 countries around the world,” said Eric Trappier, Chairman and CEO of Dassault Aviation. “Moreover, of the 2,500 Falcons delivered to date, more than 2,100 are still flying – which is a clear testimony to the high quality and robustness of our

Falcon aircraft and the dedication of those that support them.”

Additionally, the Falcon line has been among the leaders in offering operators dependable round the globe 24/7 customer service. In addition to the network of 51 service centres, 100+ field reps and 15 spare parts centers with over $800 million in spares inventory, Dassault has been a  pioneer in optimising aircraft-on-ground support, notably through FalconResponse, with its alternative lift offering. Equipped with a pair of dedicated Falcon 900s based in the US and Europe, FalconResponse has flown more than 300 missions since it was launched two years ago. 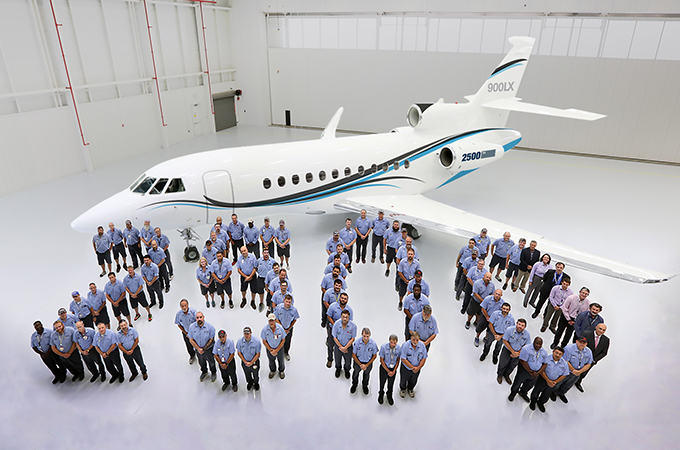