A collection of luxury apartments at a skyscraper in London’s Canary Wharf district is up for sale to interested investors.

The developer, Canary Wharf Group, says the exceptional apartments at One Park Drive “define urban living within this instantly recognisable part of London”.

One Park Drive has been designed by Herzog & de Meuron, and is the Swiss firm’s first residential project in the UK.

The critically acclaimed architecture firm has ensured that One Park Drive engages seamlessly with its surroundings, paying homage to its prominent waterfront location while at the same time, providing a natural circular contrast to its neighbours.

This continues the trend of effortlessly blending past and present, a technique that won Herzog & de Meuron praise for its most recent project, the extension of the Tate Modern, which launched in 2016. The firm has also been commissioned to design Chelsea Football Club’s new stadium, which is due for completion in 2021.

Standing out amongst Canary Wharf’s famous skyline, the eye-catching apartment building, with its cylindrical appearance will form part of the new district of expansion in one of the city’s most celebrated areas.

The next phase of Canary Wharf’s development will further accelerate the area’s transformation, which has already started to see organisations like Mayfair’s Arts Club commit to opening a new venue in the Docklands.

Canary Wharf’s profile is changing fast, with a growing number of start-ups and media companies increasingly attracted to the area because of its innovative tenant base, excellent transport connections and expanding leisure facilities.

Meticulous attention has been paid to the design of this 58-storey building, ranging from cleverly concise studios to spacious four-bedroom penthouses. Three typologies – Loft, Bay and Cluster – powerfully expressed in the exterior and interiors have their own distinct personalities.

Each apartment will offer generous views over the surrounding docklands and across London, while the layout of the building has been planned with privacy in mind, ensuring that no unit is overlooked.

Residents will also benefit from a lobby with concierge, a library, plus a screening room. There will also be a modern fitness suite, including a gym and 20-m swimming pool overlooking the docks as well as a steam room and sauna.

Sir George Iacobescu, Chairman and Chief Executive Officer, Canary Wharf Group, says:  “Canary Wharf has always been pioneering in its approach to the built environment and urban design. One Park Drive, the first residential building by Herzog & de Meuron in the UK, will represent the best of Canary Wharf as our private Estate develops into a new destination for London. Herzog & de Meuron are a practice that we have long admired for their meticulous approach to design, their ability to challenge preconceived beliefs and conventional wisdom, delivering a truly remarkable finished product.”

“One Park Drive will become a fixture on the London skyline and this launch represents a rare and very limited opportunity for people to buy a home in London. This more than just a building, it is a piece of art.”

Jacques Herzog, Herzog & de Meuron said: “Residential high rises are conventionally characterised by the negative qualities of sameness and too much repetition. One Park Drive has three distinct zones offering different types of accommodation that are clearly expressed offering a sense of individuality in a larger development.”

Brian De’ath, Director of Residential Sales, comments: “One Park Drive will define the standards by which all future residential projects will come to be measured. In terms of how it works, how it looks and the quality of every detail, it is something very special indeed.”

Canary Wharf’s new district comprises around two thirds residential properties, or approximately 3,300 new homes, a quarter of which will be affordable with the capacity in the future to build a further 400 new homes. The site will also create over 17,000 new jobs through hotel, leisure, construction and recreational facilities.

Construction work on the site has already begun and completion of the first district of this development will follow the arrival of Crossrail in 2018. Once the Crossrail station opens, Canary Wharf will be only six minutes to Liverpool Street, within 39 minutes of Heathrow and moments from City Airport and international train services to Europe.

Construction work on the site began last year and the first district is expected to complete in 2019. 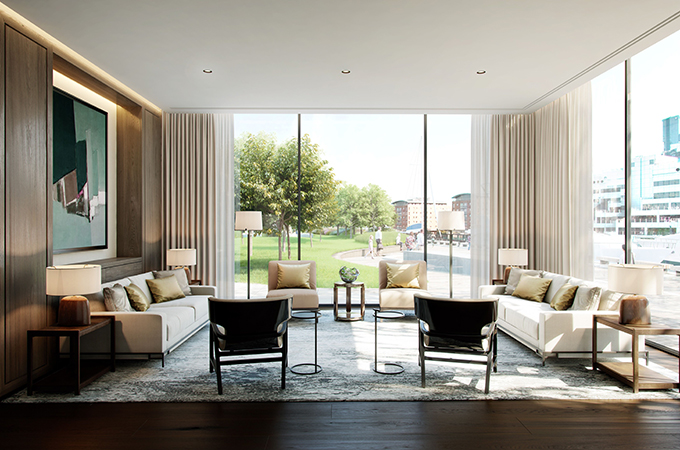 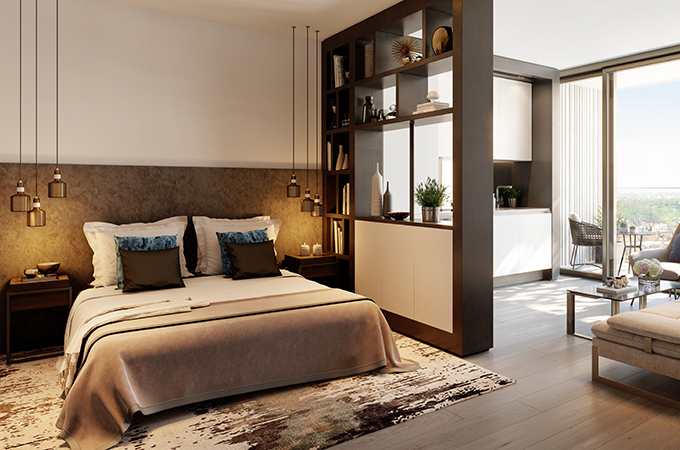