NasJet and ExecuJet are to extend their joint-venture FBO (fixed base operations) in Riyadh to the international airport’s Royal terminal from next year.

The news was revealed at the Middle East Business Aviation (MEBA) show, which is currently under way in Dubai, UAE.

A joint venture between the Saudi aviation group and Switzerland’s ExecuJet, the FBO (fixed base operation) is also celebrating one year of successful operations.

New services introduced include aircraft washing for narrow-body aircraft and a ‘customer guarantee’, under which basic handling charges would be refunded to customers not completely satisfied with their service.

NasJet CEO Saad Alazwari says: “The combined dynamics of local knowledge and international expertise has significantly lifted the user experience to set a new benchmark for FBOs in Saudi Arabia.”

ExecuJet Operations Director Mark Hardman adds: “Saudi Arabia is one of the Middle East’s busiest and most demanding business aviation markets. Customers in Riyadh are experienced and discerning, so the excellent feedback they have given is testament to the success of our close partnership with NasJet. The number of movements we’ve recorded in Riyadh this year is ahead of forecast, which gives us great confidence for the future and we expect our FBO movements to increase by 30-40 per cent in 2015.”

He continues: “The next exciting step in Riyadh is the launch of our FBO services at the Royal terminal, serving heads of state, Royalty and other VIP traffic. This operation, which benefits from the combined VIP expertise of ExecuJet and NasJet, will set new service standards in the region.

We have just signed the agreement and will be ready to start serving customers from early 2015”.

Launched in 1999 in Riyadh, Saudi Arabia, NasJet manages and maintains a fleet of 67 aircraft and flies hundreds of VIPs to more than 10,000 airports around the world.

The three-day MEBA, which has attracted 420 exhibitors, runs until tomorrow.

ExecuJet is at stand 575 while NAS can be visited at chalet A17. 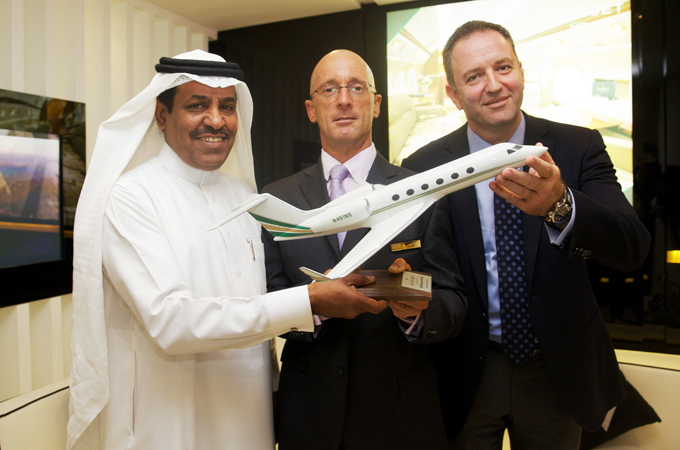