The ceremony was held on the sidelines of the three-day Middle East Business Aviation (MEBA) exhibition, which opened at DWC today.

The Abu Dhabi-based VIP jet and helicopter service provider revealed that the $80-million project is scheduled for completion by the end of 2015.

Spread across 13,705 sq m, the facility will provide customised services to VIP customers and will also feature a state-of-the-art hangar equipped to accommodate up to an Airbus A380 superjumbo jet.

In addition, it will offer VIP lounges, workshops, offices, and an in-house design studio for its clientele.

Falcon Aviation Chairman Dr Sheikh Sultan bin Khalifa bin Zayed Al Nahyan said: “We are proud to offer the first facility of its kind in the Middle East. With the boom of the aviation industry in the Middle East, the opening of such facilities puts the region at the leading edge of aerospace technology. Falcon Aviation not only fills a niche in the VIP completions market, providing an exclusive service to aircraft owners and operators in the Middle East, it brings the UAE closer to becoming the global trade hub of the world.”

Sheikh Ahmed bin Saeed Al Maktoum, Chairman, Dubai Aviation City Corporation, said the significance of the project is evident not only in the investment behind it but also the purpose it serves.

“DWC’s Aviation District is ideally placed to host a project of this scale in that it is well equipped with world-class infrastructure and facilities to support the aviation business, whether it is MROs (maintenance, repairs and operations), FBOs (fixed base operators), aircraft manufacturing or training, research and development,” said Sheikh Ahmed, who is also Chairman and Chief Executive Emirates Airline & Group and President of Dubai’s Department of Civil Aviation.

“The completions centre not only serves to bridge a definite gap in the market but enables us to redefine standards of success in the aviation industry, worldwide,” he added.

Falcon Aviation has partnered with global leaders for the development of the centre including Bombardier, Integrated Aerospace Alliance, CDG and Rockwell Collins.

The Falcon hangar and completion facility and MRO will be built by consulting architects Arkiplan.

ASI Global has been appointed to design the stressed arch hangar while Mabani Steel will fabricate and erect the steel structure.

Leading UAE contractor Al Shafar National Contracting is the builder and main contractor for the project.

With a world-class MRO and service centre for aircraft manufacturers, Falcon Aviation has been a leading company in the VIP aviation sector since 2006. An approved Embraer and Airbus Helicopter service centre, Falcon Aviation operates a fleet of VIP jet aircrafts along with Bell 412 helicopters, serving the offshore oil and gas sector.

It also provides VIP helicopter charters and tours within the UAE.

Dubai World Central is billed as the world’s first purpose-built aerotropolis. Built around Al Maktoum International Airport, which will become the largest airport in the world when completed, DWC is said to be the first city in the world to be exclusively designed around an airport.

Almost twice the size of Hong Kong, at 145 sq km, DWC has been designed as a self-sustained economic zone with the airport in the centre surrounded by businesses, trade facilities, customised transportation links, residential offerings and the home of Expo 2020.

MEBA, which is organised by F&E Aerospace on behalf of the Middle East and North Africa Business Aviation Association (MEBAA), has 420 exhibitors and will run until December 10. 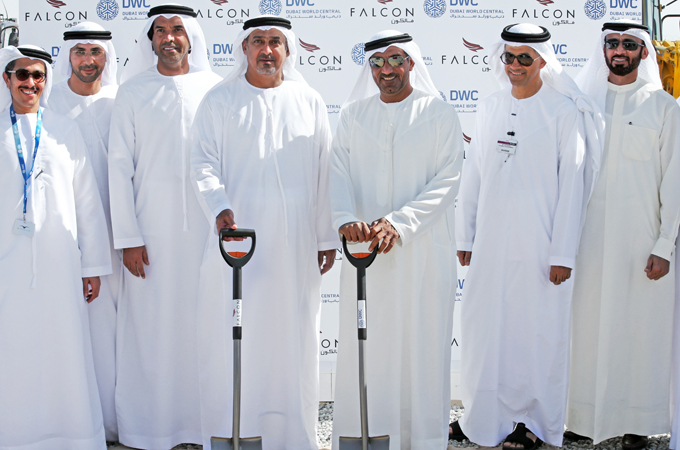