A rare complicated watch from Swiss watchmaker Patek Philippe could fetch close to $10 million at a Sotheby’s auction in Geneva next month.

The legendary Patek Philippe Yellow-Gold Calibre 89 will lead the auction house’s Important Watches sale in Geneva on May 14.

The Calibre 89 the most complicated watch ever created when Patek Philippe unveiled it in 1989 to mark their 150th anniversary. Offered with an estimate of CHF6.5–10 million/$6.4-9.9 million, this horological masterwork is one of the most important watches ever to be offered at auction, and it today, remains the brand’s mechanical ambassador.

Daryn Schnipper, Sotheby’s Chairman of the International Watch Division, says: “This is undoubtedly one of the most extraordinary timepieces we’ve ever had the privilege to offer. Having set a world record for any timepiece with the sale of Patek Philippe’s Henry Graves Supercomplication, it is wonderful to have the opportunity to offer yet another unique piece of such horological genius and importance.”

The Calibre 89 has 33 complications, nine more than the Graves’ 24, sold at Sotheby’s in 2014 for a record-breaking $24 million. The pocket watch remains a tour de force in innovation and importance to this day. Nine years later the final three Calibre 89 watches were finished – in rose gold, white gold and platinum.

A prototype of the watch is also displayed at the Patek Philippe Museum in Geneva.

In addition to the complex calendar functions, including a tourbillon escapement and an astronomical sun hand, the watch features a unique calendar which displays the date of Easter every year.

This exceptional timepiece will be offered during the inaugural season at Sotheby’s brand new sales location in Mandarin Oriental, Geneva. 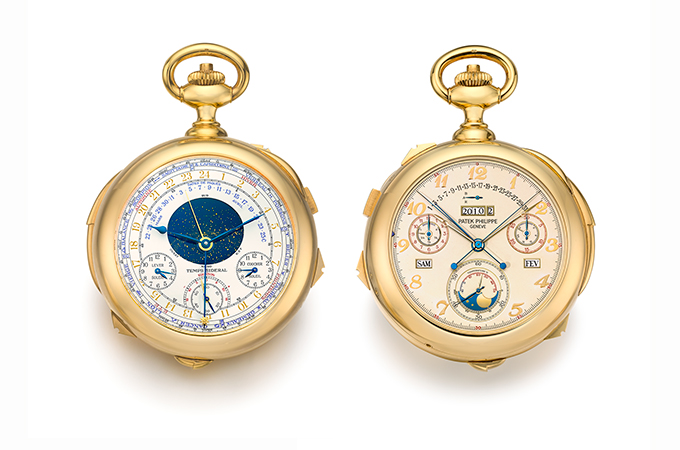