The 2017 edition of Art Dubai, Dubai’s annual art fair, drew a record 28,000 visitors over the course of the four-day event.

As many as 98 museums and institutions were attendance from across the world and sales were reported to be the strongest to date.

A total of 94 galleries attending from 43 countries made Art Dubai 2017 the most international edition since the beginning of the fair.

Now in its eleventh edition, the fair was held under the patronage of HH Sheikh Mohammed bin Rashid Al Maktoum, Vice President and Prime Minister of the UAE and Ruler of Dubai.

This year’s edition was the fair’s largest and most international, with new galleries and countries participating for the first time, reinforcing its position as the world’s most globally diverse art fair, as well as the preeminent platform for the regional art scene.

A record number of 98 museums and institutions visited the fair this year, with museum directors and curators from returning institutions, including the Tate, London; the Victoria & Albert Museum, London; The British Museum, London; The Centre Pompidou, Paris; MoMA and MoMA PS1, New York; LACMA, Los Angeles and Mathaf: Arab Museum of Modern Art, Doha. Institutions visiting for the first time included the Peabody Essex Museum, Salem; the Norton Museum of Art, Palm Beach; and the Philadelphia Museum of Art, Philadelphia.

For the first time, Art Dubai also ran its inaugural Invited Collectors programme, hosting over 150 international collectors and curators, who took part in a week-long extensive cultural programme across the UAE.

Participating galleries were generous with their praise for the 2017 edition.

“This year was one of our most successful at Art Dubai to date,” said Sunny Rahbar of The Third Line, Dubai. “In addition to selling out our booth, we have been able to meet interesting new collectors and connect to staff at some of the most important institutions in the contemporary art world.”

Yuli Karatsiki, the Gallery Manager of Kalfayan Galleries of Greece, commented: "After ten years of attending the fair we can say that this year has been one of the best in terms of attendance, concrete sales, and further good conversations and connections."

Moiz Zilberman, Founding Partner of Zilberman, said: "It's been a very good fair - from a sales point of view (we've sold nine works this week) but also from a connection point of view, particularly institutionally. Dubai is like a home for us - it's always nice to come back and see new faces as well as old friends."

Fabian Lang, Associate Sales Director of London’s Victoria Miro, said: "This year has been very successful for us at Art Dubai - we nearly sold out the stand and have sold works by Idris Khan, Alex Hartley and Yayoi Kusama. We feel this year has really seen the fruit of our and the fair's labour - proof of the time we have put in for the past 5 years here in Dubai, consolidating relationships, as well as establishing new ones."

Prateek Raja, Director of Experimenter from India, said: “This year has in particular seen lots of new Indian collectors, which is great for us as it means we are able to confirm sales from relationships back home through the relaxed setting of the fair here.”

Nieck de Bruijn, the owner of Upstream Gallery from Amsterdam, said: “We’ve made sales, we’ve met new people, we made it into the press – everything you would want from a fair. We also met some new institutional contacts which was interesting. Looking forward to next year!”

Aleksandra Urbańska from Warsaw’s Kasia Michalski Gallery said: “Networking-wise it was a great fair - there were a lots of directors from international institutions coming to visit the booth, and we had some great conversations. It was worth coming to the fair and we also made some sales with was brilliant!”

Adrian Turner, director at New York’s Marianne Boesky Gallery, said: "We really enjoy it here and we're always happy to come back. Everyone's very welcoming - lots of new faces and very positive to see familiar faces as well. The fair did a lot of outreach to museums this year, and you can tell as the institutional presence is strong."

Highlights of this year’s fair included the unveiling of Rana Begum’s monumental winning work for the ninth edition of the Abraaj Group Art Prize, the eleventh Global Art Forum that focused this year on trade, the extensive programme of performances taking place around the fair and the commissions programme that included The Room by Atfal Ahdath and Meriem Bennani’s installation at the Art Dubai Bar.

Outside the fair, Art Dubai’s Art Week programme had a record number of 150 participants hosting over 350 events across the city. Highlights included the sixth edition of Design Days Dubai, Sikka Art Fair and 27 gallery exhibitions in Alserkal.

Art Week also saw the announcement of the opening of the Jameel Arts Centre, one of the first major not-for-profit contemporary art institutions in Dubai, due to open at the end of 2018. The centre was seen to be active at the fair adding both Middle Eastern and international artists to the Jameel Art Collection.

Art Dubai 2017 was held in partnership with The Abraaj Group, who celebrated their annual Abraaj Week alongside the fair, and was sponsored by Julius Baer, Meraas and Piaget.

The fair took place at the Madinat Jumeirah resort from March 15 to 18. The Dubai Culture and Arts Authority is a strategic partner of Art Dubai and, along with Dubai Design District (d3), supports the fair’s year-round education programme. 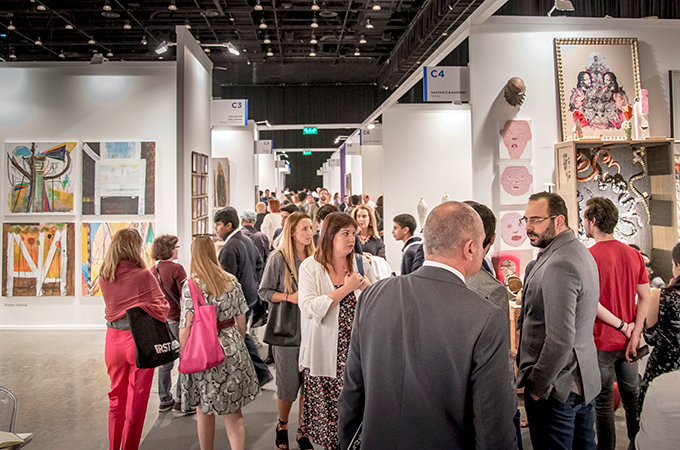