Christie’s spring sale for Modern and Contemporary Middle Eastern Art auction in Dubai will be one of the largest to date in its 11-year history.

The annual March auction will showcase the very best of modern and contemporary art from 114 artisits from the region and feature the concurrent themes and images that were tackled across Iran, Iraq, Lebanon and Egypt.

Furthermore, two works by Ali Banisadr (Iranian, 1976) will be showcased in London alongside the highlights of the firm’s upcoming and prestigious Post War and Contemporary Art Evening auction in London on March 7 – a first, as well as a very positive development towards the recognition of Middle Eastern art on the international market.

The majority of works offered in the Dubai auction on March 18 are from private collections, spread from as far as Los Angeles to Amman, from Arkansas to Sweden, Argentina to Beirut, which lays testament to the far reach of art from the Middle East and the maturity of its market and the pivotal positioning of Christie’s Dubai.

The spring sale will be led by a stunning 6-m long painting by Ismail Shammout (Palestinian, 1930-2006) recalling the history of Palestine. Odyssey of a People (estimate: $800,000-900,000) was painted in 1980 as a result of a relentless dedicated effort of over 6 months of daily work (please see dedicate release here).

The Modern Art section of the auction is led by a group of works by Mahmoud Saïd (Egyptian, 1897-1964), all from private family collections linked to the master, with two works from the artist daughter’s collection, which are particularly interesting. The painting  Assouan- îles et dunes will be offered alongside its preparatory sketch, both executed in oil on board in 1949 – again a first occasion on the Middle Eastern art market. A warm sunlit Nile scene in which the observer can detect small variations and light changes in the two compositions: the luminous yellow tone of the mountains and the pure cerulean blue of the sky are much more crude in the final work than the ‘modello’’s more subtle palette. Saïd further opts to shift the largest felucca maneuvered by two men more to the centre of the composition, by moving it from the middle ground (as seen in the ‘modello’) to the foreground in the final work (estimate: $250,000-300,000).

Without doubt, the unique self-portrait or ‘introspection’ offered by Christie’s in this sale is one of Saïd’s most striking and intimate self-representations amidst his eight or nine known self-portraits, four or five of which are drawings. As indicated by its title, Saïd reflects on himself, aged thirty-three in 1930. Omitting all references to his social status, legal position or artistic hobby, he presents himself as a tormented man, driven by passion but restrained by profession. This work was also part of the Nadia Mahmoud Saïd and Dr Hassan Elkhadem collection and will be offered with an estimate of $8,000-12,000). Christie’s will launch “Mahmoud Saïd”, the first ever published catalogue raisonné published about any Middle Eastern Artist on March 15.

A phenomenal work by Faeq Hassan (Iraqi, 1914-1992) showcases his sheer skill and mastery of form and colour. Painted in 1968, Untitled presumably depicts the battle of Hattin, marking the defeat and annihilation of the Christian Crusader armies by the Muslim forces of Salah Al Din (Saladin) and paved the way for his reconquest of the city of Jerusalem in October 1187. A particularly poignant theme in the 1960s at a time when Hassan formed the short-lived Az-Zawiya Group following the Six Day War, it can be considered one of the largest and most accomplished works by the artist (estimate: $400,000-600,000).

An unusual takween (composition) by Paul Guiragossian (Lebanese, 1926-1993) from the 1960, will be coming back to the region after many years having been part of a prestigious private New York art collection. The work is indicative of the artist’s mastery in figurative depictions of the intimacy of families as well as a fantastic command of brushstroke and manipulation of paint, which lays the foundation for his later abstract practice. Today it is rare to find works by Guiragossian from this period to be offered in the market (estimate: $80,000-120,000).

Omar el Nagdi’s (Egyptian, b. 1931) The flute player, painted in 1959 is a stunning example showcasing the artist’s infatuation with Italian frescos (he studied at that time in Italy and graduated from the Academy of Venice in 1965) and Ancient history as well as the hieroglyphic Egyptian art. This work was bought directly from the artist in Italy, by its present Swedish owners, which demonstrate the bridge that many of these Arab artists were able to cross with European markets (estimate: $50,000-70,000).

The Contemporary section of the auction offers an array of works.

The two works by Ali Banisadr (Iranian, b. 1976), will both be exhibited in London end of February, alongside the highlights of the Post War & Contemporary Art auction in London. The smaller one, entitled The Sun/Son and painted in 2013 is a dynamic semi-abstract composition where whirlwinds of bright and fiery colours are juxtaposed with a quick and frantic, yet thick brushstroke carrying a sense of spontaneity and nervousness. Illustrating a compelling fantastical state of perpetual motion, and plays on inspiration from Persian Manuscripts, Hieronymus Bosch and Abstract Expressionism – reflecting a cultural history through centuries and continents (estimate: $80,000-120,000).

Charles Hossein Zenderoudi (French, born in Iran, 1937) refers to his works from the early 1980s as his masterpieces, in this case a shimmering composition that is indicative of his Letterism period, arising after he moved to Paris. Untitled, painted in 1984, is part to the art collection of Iran’s most popular actress Mary Apick. She hosted regular cultural salons at her home and one she devoted to Charles Hossein Zenderoudi and soon after she acquired this work directly from the artist (estimate: $180,000-220,000).

An impressive work by Chant Avedissian (Egyptian, b. 1951), depicting in many imageries scenes of the rural life in Egypt. He is known to portray the democracy of Nasserist Egypt post the 1950s overthrowing of the monarchy. Focusing on the new ideologies of man, woman in the working field, the role of each one defined and respected. Transforms symbols and style of popular culture such as cinema posters into fine art. Scenes of Egypt, Rural was executed in 1994-95 and will be offered with an estimate of $80,000-120,000.

The Chorus, a more recent work, painted in 2014 by edgy contemporary artist Tala Madani (Iranian, b. 1981), envisions the nature of relationships and the notion of sound. This playful distortion of simultaneous cultural and explicit sexual identity is rendered with a loose brushstroke and comical lines generating a cartoonish work lending it both humanizing innocence and humorous nonchalance (estimate: $40,000-60,000. Her works are humorously imagined and often carry an ironic portrayal of the culture of femininity and masculinity stereotypes and often the rendering of animated men-only events.

Nabil Nahas (Lebanese, b. 1949) is represented in the auction with a work from his well-known sea star series. This work has been consigned from a private art collection, based in Philadelphia with an estimate of $80,000-120,000. The repetitive pattern of the sea stars is a reflective thought of the natural phenomenon of regeneration. In 1991, Hurricane Bob (New England - North Carolina-Atlantic) had left the beaches littered with plenty of starfishes which Nahas started collecting and after they had dried, applied them on the surface of his canvases and the dense and textured layers resulted in low-relief sculptures. In contrast to the other flamboyantly coloured works from the series, the present work is of a golden colour reminding us of golden sun-lit sandy beaches, whilst referencing Islamic art influences that are part of Nahas’s cultural heritage (estimate: $80,000-120,000).

All the events will be held at the Jumeirah Emirates Towers Hotel. 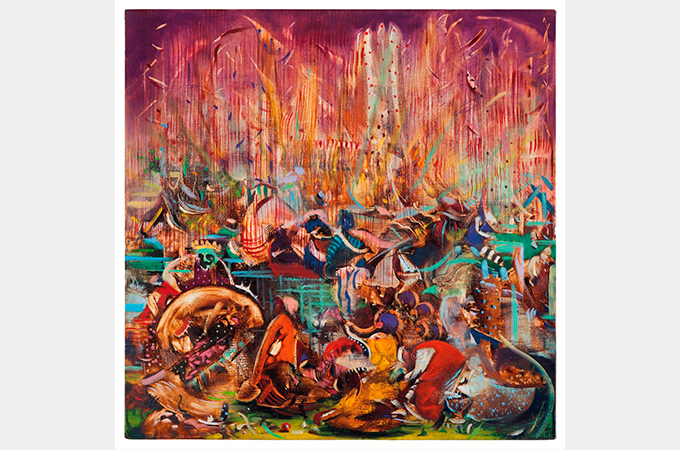 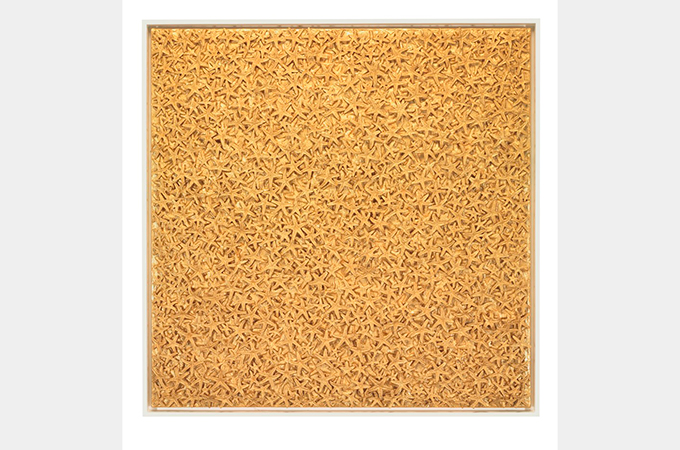 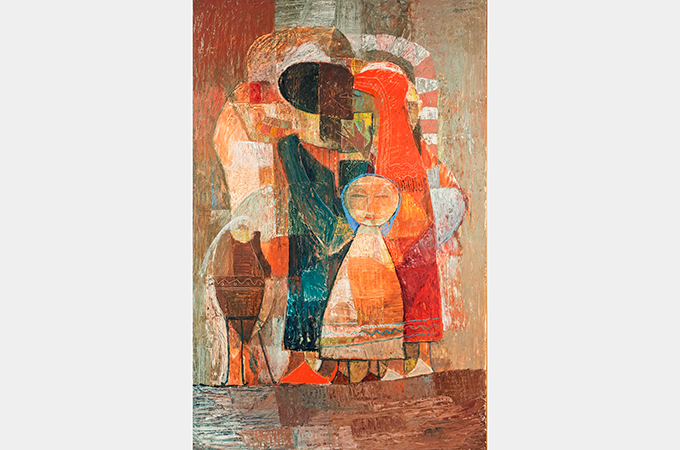 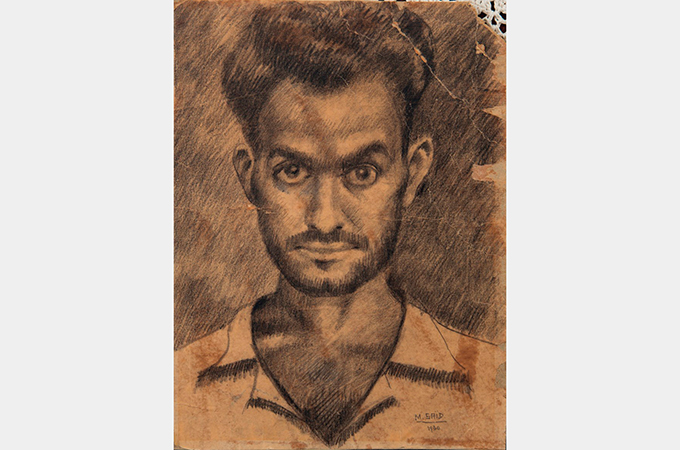 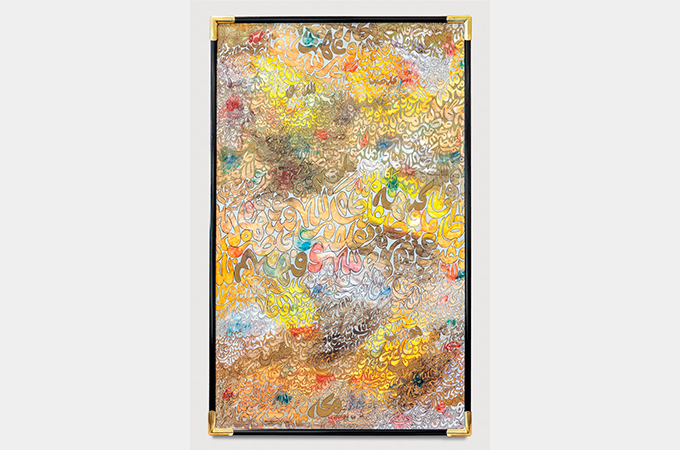 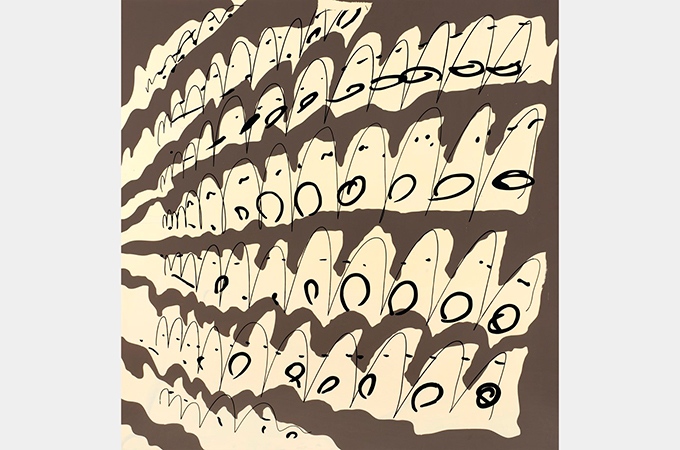 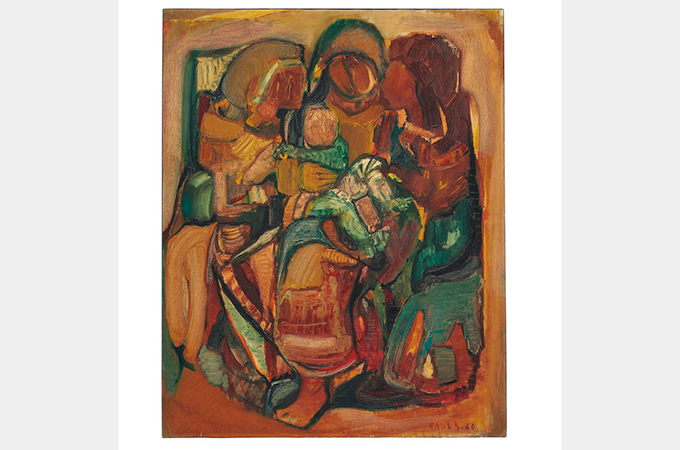 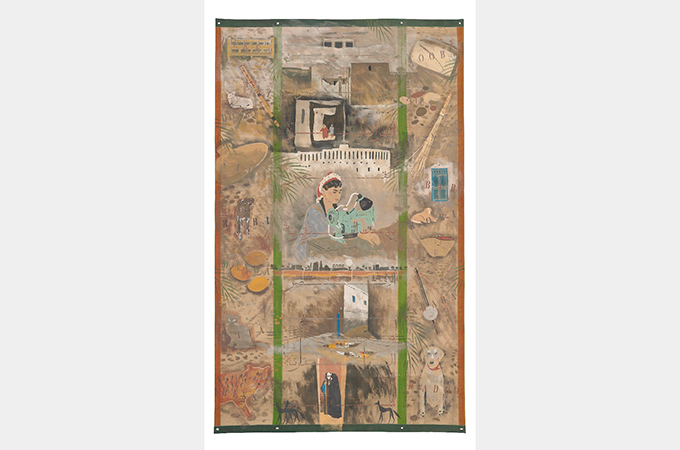