A luxury penthouse in central London is being offered as the perfect creative pad for home buyers with literary aspirations.

The three-bedroom Bolsover Penthouse is the crowning residence at The Fitzbourne, an award-winning project in Fitzrovia developed by Oakmayne Bespoke, and is available through agents CBRE, Carter Jonas and Savills with an asking price of £5.5 million ($6.7 million).

The penthouse is named after the extensive estates in Bolsover, Derbyshire that were owned by Lady Cavendish Holles, who laid out the Portman Estate.

The interior design of the penthouse is an eclectic mix fusing Fitzrovia literary cool with the latest in modern technology. Oakmayne Bespoke, in conjunction with interior designer Louisa Penn, has sought to move away from the usual fare of luxury developers in London. Gone are the bland taupes, butterscotches and beiges, replaced by vibrant pops of colour, which nods to Fitzrovia’s literary history and statement architectural features.

The penthouse is positioned across the fourth and fifth floors of the restored red-brick Victorian building, with a private roof terrace on the sixth floor. Two architectural helical staircases, made from an eye-catching combination of steel and glass, connect the floors. The penthouse stretches to 2,519 sq ft, providing three bedrooms, whilst the roof terrace totals 477 sq ft and provides far-reaching views across Fitzrovia’s cityscape.

Martin Lent, CEO of SCM, the development manager for Oakmayne Bespoke, said: “In creating The Bolsover penthouse at The Fitzbourne we wanted to provide an alternative interior design language and style, for a considered purchaser who wanted something different to the standard luxury London norm. We have been inspired by the milieu of Fitzrovia, and the significant writers who have lived in the area. To this end, we have made sure that The Bolsover has plentiful writing space so that the new owner can pen their own masterpiece!”

Throughout The Bolsover, stylish flourishes have been employed. From the bespoke-made fabric television surround, to the textured ‘sea-grass’ wallpaper and signature industrial-style chandelier above the dining table, Oakmayne Bespoke has designed the space to be a relaxing refuge above the hubbub of London’s streets.

The original architectural features of the building have been used throughout - including the corner-bay window overlooking New Cavendish Street and Great Portland Street, which has been fitted with custom banquettes to provide a reading area and the circular window in the second bedroom’s en suite bathroom, which illuminates the shower.

A birch wood veneered front door leads into the open-plan living space, arranged around the main helical glass and steel staircase. The bespoke Häcker kitchens feature grey ash base and bronze metallic cabinets, with princess white marble surfaces and splashbacks. All inbuilt appliances are by Miele, including a wine cooler. A large L-shaped sofa sits in front of the fabric television surround, with a twelve-seat dining table next to the breakfast bar and kitchen. Adjacent to the living area is a self-contained bedroom suite, resplendent in crimson, with a specially designed writing area and study separated from the bedroom and marble-clad en suite bathroom by sliding pocket doors. A guest w/c and utility room complete the lower floor.

The master suite has been finished with in a pleasing colour palette of blues and greens, referencing the bedchambers of great Victorian palaces. A relaxed sitting area is upholstered in powder blue, whilst a roof light illuminates the large bed. A blue-grey wood veneered walk in wardrobe with custom cabinetry leads through to the large master en-suite, clad in Calacatta Tucci Italian marble, with a statement polished plaster curved wall and freestanding bathtub as well as a double shower. An aquavision waterproof TV offers the ultimate pleasure for a hot soak in the bath tub.

A generous guest suite is made atmospheric through the use of the building’s original eaves and also lit by a skylight. A second helical staircase leads up to the roof terrace.

Within The Bolsover, Oakmayne Bespoke have aimed to future proof the technical specifications, with a whole house Crestron automated home control system, which can be used via both touchscreen panels or an iPad app. Comfort cooling and heating, with whole house heat recovery system, has been included, as well as Cat 6 wiring in all habitable rooms and a Bowers & Wilkins home audio system.

The literary history of Fitzrovia is well documented; the area was previously home to such writers as Virginia Woolf, George Bernard Shaw and Arthur Rimbaud. The two main public houses in Fitzrovia, The Fitzroy Tavern and The Wheatsheaf, were the haunt of Quentin Crisp, Dylan Thomas and George Orwell, whilst Thomas Paine, who authored The Rights of Man in 1791, lived at 154 New Cavendish Street.

The Fitzbourne is a short walk from Oxford Street and within touching distance of three London Underground Stations: Great Portland Street, Goodge Street and Oxford Circus (all Zone 1). Great Portland Street itself is replete with eateries, including the upmarket Villandry, Spanish specialists Iberico, the chic Scandinavian Kitchen and The Riding House Cafe. Residents at The Fitzbourne can also take advantage of a manned concierge as well as a year’s membership with award winning private members club Quintessensially lifestyle. Secure internal bicycle parking and 25 years membership to Zipcar, which provides access to thousands of strategically-parked ‘sharing’ cars throughout London. The nearest Zipcar station is on Great Titchfield Street, just one street south of The Fitzbourne.

The Fitzbourne won Silver in the ‘Best Interior Design’ category at the WhatHouse? Awards 2016.

The luxury Oakmayne Bespoke Brand focuses on creating luxury residences characterised by bespoke finishes, outstanding attention to detail and materials of exceptional quality sourced from around the world. 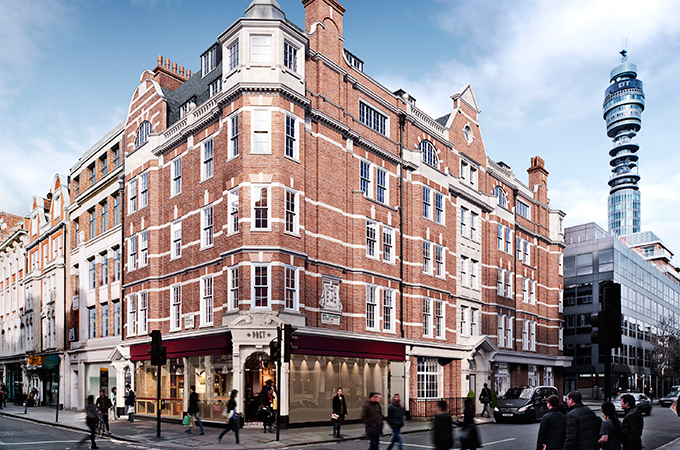