Jewellery from celebrated designers including Cartier, Van Cleef & Arpels and Tiffany will also feature in the sale, which will consist of 179 lots in total.

Susan Abeles, Director of Jewellery, Bonhams US, says: “Type IIa diamonds are regarded as the most chemically pure given they often have exceptional optical transparency. This particular stone is simply stunning and is the ultimate diamond for anyone to own given its rarity and beauty.”

The second leading lot Bonhams will be offering is a Kashmir sapphire and diamond ring by Shreve & Co.  Dating from the 1900s, the cushion mixed-cut sapphire, weighs 6.90 carats, and has no indication of heat or clarity enhancement. It is estimated at $70,000-$90,000.

Abeles says: “The sapphires hailing from Kashmir display a velvety quality and a rich blue tone unique to the region. They are among the most highly-prized gems for serious collectors and investors given their extreme rarity.”

In line with the ongoing demand for coloured stones, the sale also offers an impressive number of lots featuring emeralds and rubies.  The first notable coloured stone lot is an Emerald and Diamond ring estimated at $280,000-$380,000.  The emerald weighs 13.82 carats and is of Colombian origin with indications of minor clarity enhancements.

The second coloured lot is a Diamond and Ruby necklace estimated at $100,000-$150,000.  Designed as an articulated, marquise, baguette and round brilliant-cut diamond ribbon, the elegant necklace simulates a scarf and is enhanced with a series of oval and round mixed-cut rubies.   The rubies originate from Burma (Myanmar) origin and have no indication of heat or clarity enhancement.

Bonhams will also auction a number of jewels belonging to a royal family.  These include a Sapphire and Diamond pendant necklace featuring an oval mixed-cut sapphire, weighing 25.26 carats.  The detachable pendant allows for the necklace to be worn as a diamond rivière necklace and the pendant as a brooch.  It is estimated at $80,000-$120,000.  The second royal lot is an impressive 27.24 carats Sapphire and Diamond ring. Estimated at $30,000-$50,000, the sapphire is of Burma (Myanmar) origin and has no indication of heat or clarity enhancement.

For jewellery lovers and collectors, the Bonhams sale also includes a number of lots created in the Art Deco period, an era that continues to be sought after by collectors around the globe.  Highlights include:

•An Art Deco Diamond and Sapphire Brooch, circa 1915, estimated at $8,000-$10,000.  Beautifully crafted, the three square step-cut diamonds, set with a foliate design of baguette, square and single-cut diamonds, are surrounded by callibré-cut sapphires in a mosaic fashion, making the brooch a real triumph in terms of design and craftsmanship;

•An Art Deco Emerald and Diamond brooch, circa 1930.  This geometric design features triangular, square, rectangular and baguette-cut diamonds and is estimated at $30,000-$50,000; and

•An Art Deco Emerald and Diamond bracelet by Tiffany & Co Circa 1925. It is more unusual to see an Art Deco piece with coloured stones given the majority of pieces from the period consist mainly of white diamonds making this piece highly desirable.  It is estimated at $75,000-$85,000. 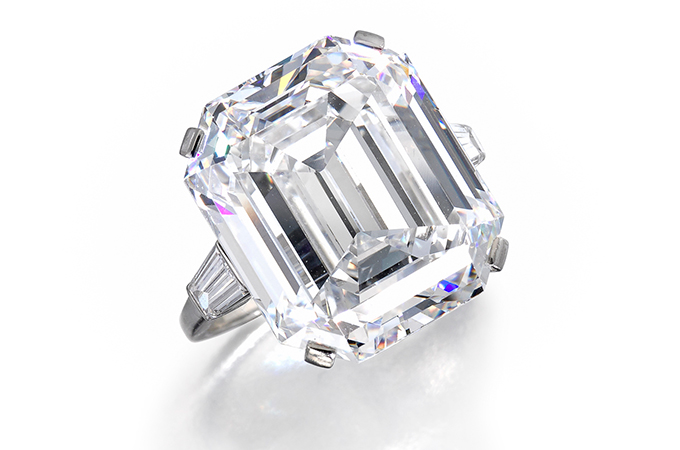