The 1,410 sq ft light-filled triple aspect home, has been lovingly restored by its current owners, and has its own beautifully planted private walled garden, as well as access to the award-winning Royal Crescent Gardens.

Laid out in 1846, Royal Crescent is Holland Park’s most architecturally interesting street and was inspired by its older namesake in Bath, from which it differs as it is not strictly a crescent but rather two quadrant bowed terraces. It was designed by Robert Cantwell, who was responsible for much of the development on the Norland Estate, of which the crescent is part.

As forebear to the A-list celebrity celebrities currently residing in the crescent, Anthony Edward Brett (1861-1948), whose stage name was Eille Norwood lived in the property, as a successful stage actor and later a silent-film star.

From 1921 to 1923 Norwood played Sherlock Holmes in forty-seven silent films, giving him the accolade of the longest serving Sherlock Holmes actor. He was probably responsible for an early renovation in what was his front room – installing the curved oak paneling and smart fireplace beside which he could relax with his own Holmsian pipe.  This is now a grand, elegant, light-filled bedroom, with gorgeous views across to the stately lime, plane and chestnut trees of the Royal Crescent gardens.

Nicholas Shaw, Sales Manager of Harrods Estates Kensington commented: “Royal Crescent is a beautiful home in the heart of Holland Park. Meticulously refurbished by its current owners, the property has been finished to an exceptionally high standard and is dressed with designer finishes and antique furnishing – making it an outstanding home.”

Royal Crescent is within an imposing stucco-fronted regency style house, which was split into apartments after World War II. Being at the end of the row of terraces, there is an impressive circular turret which acts as a “bookend” for the quadrant. To access the apartment there is a CCTV security gate, with steps leading down to its own private front door.

The entrance hall is majestic, and there is a “shell like” staircase which splits off into the two halves of the house above, where the two guest bedrooms and master bedroom are located.

Enjoying the spacious circular room to the lower ground floor is a curved bespoke Dan Frank kitchen.  Its sleek organic minimalism took an impressive nine months to create. There are built-in Gaggenau appliances, Corian worktops and an informal dining area which seats five, from which you can savour breakfast or lunch overlooking the roses, olive tree and exotics in the small front garden. There is plenty of storage space including a large pull-out larder cupboard, and the room is complete with an imposing original black slate fireplace.

On the lower floor, there is seamless porcelain tiling throughout, with underfloor heating. Across the hall from the kitchen is the main living space, with a large and beautiful circular bay window and door leading into the walled garden.  Each of the panes here is delicately framed with a fruiting grapevine and the window features a bespoke joinery seating area below – the perfect place for an early evening glass of wine overlooking the sun-filled, 30’, walled garden.  It is a tranquil oasis, with a feature paper-bark birch, bay tree and abundant architectural planting.  There are flowers for every season too, including deep pink hydrangeas, Japanese anemones, cerise and magenta geraniums, and, in early summer, festoons of climbing rose blooms.

Inside, the interior design has been well thought-out. The well-proportioned, twin-aspect living space is intelligently zoned and divided up into a dining and lounge area. A long, modern, cornfield yellow B+B Italia sofa highlights the length of the room, and seems to add an extra dash of sunshine, underneath which is a long-haired hide rug. The room features a paneled wall, with a camouflaged door, behind which is a secret luxury guest bathroom.

The upstairs is divided into two, to the front of the property there is a grand and spacious double bedroom which shares the circular dimensions of the kitchen. It has been finished to a high standard and includes linen curtains, an original fireplace, panelled walls and custom designed storage space.

To the rear of the property, there is a further charming double bedroom and the master bedroom. The master bedroom is warm, elegant and inviting: the ceiling has its ornate original cornicing which has been skillfully restored, a vintage chandelier, bespoke built-in wardrobes and lovely views of the walled garden. The master bathroom also enjoys a chic ensuite, with his’n’hers sink and Villeroy and Boch / Hans Grohe bath/shower and fittings.

Royal Crescent is a five-minute walk from Holland Park Station (Central Line, Zone 2), and is a short walk away from the boutiques of Notting Hill and Westbourne Grove. 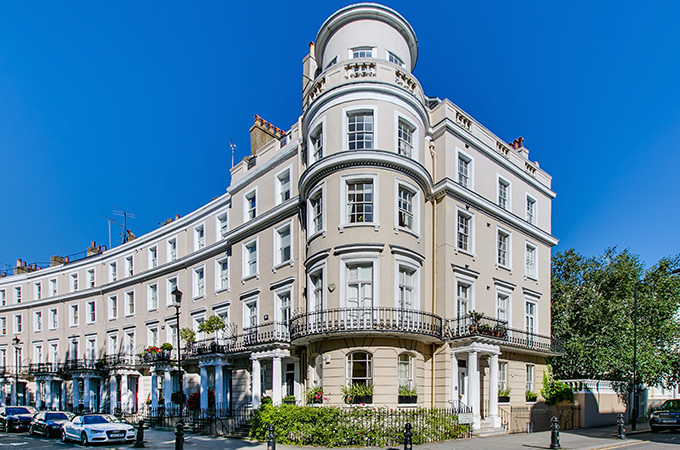 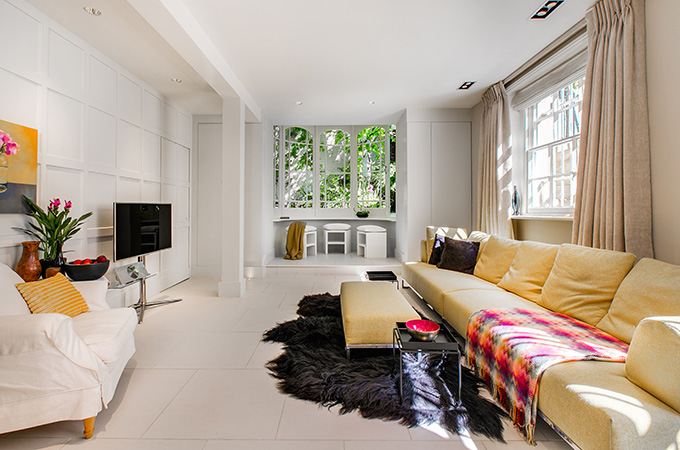 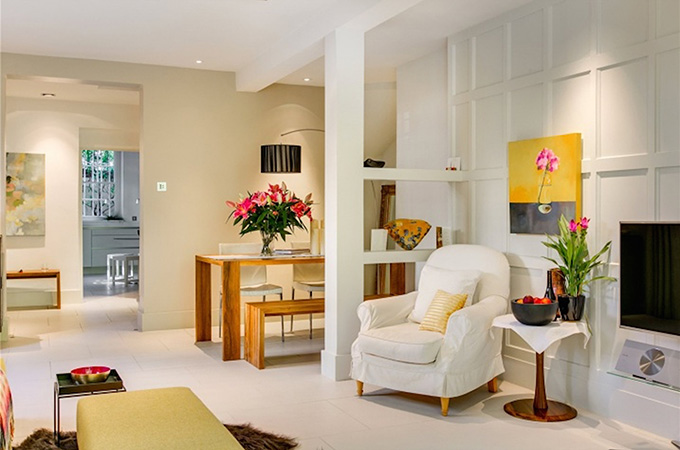 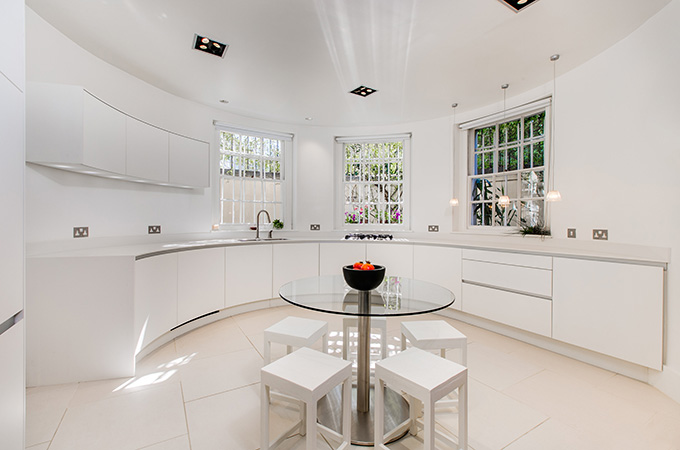