The Louvre Abu Dhabi has commissioned two acclaimed artists to create site-specific artworks for the Jean Nouvel-designed museum, which will open next year.

Giuseppe Penone and Jenny Holzer have worked closely will develop sculptures and installations reflecting the universal stories of the museum and in harmony with the iconic building.

These are the first of a number of commissions for Louvre Abu Dhabi which will, through a diversity of artists, reflect the universal nature of the museum.

Mohamed Khalifa Al Mubarak, Chairman of Abu Dhabi Tourism & Culture Authority (TCA Abu Dhabi), said: “In line with Louvre Abu Dhabi’s ambition to reflect the universal nature of art making, we have commissioned contemporary works by the internationally renowned artists, Giuseppe Penone and Jenny Holzer. The artists’ works are inspired by the museum’s iconic architecture and diverse stories and play an important role in connecting the cultures and civilisations of our past with the relevant ongoing conversations and artistic practices of today.”

Italian artist Giuseppe Penone, one of the youngest members of the Arte Povera movement, has created Germination, a four-part installation that reveals the artist’s fascination with the use of organic materials, such as trees, to highlight the connection between man, nature and art. The central element of the installation is Penone’s Leaves of Light, a vast bronze tree which interacts with Jean Nouvel’s architectural design through mirrors placed on its branches reflecting the ‘Rain of Light.’ Soaring towards the dome covering the museum’s outdoor walkways, the tree becomes a symbol of life, as shared by all cultures.

Penone commented: “The artworks that I have developed for Louvre Abu Dhabi aim to inscribe themselves in the place, underscoring aspects of its architectural form and content. The pieces that make up Germination echo the museum’s universal spirit.”

Through an exceptional collaboration with the workshops of Sèvres – Cité de la céramique, Penone has also created several works including Propagation, a wall of porcelain tiles representing concentric circles drawn by hands. The lines of the drawing germinate from Sheikh Zayed’s fingerprint to show how a simple action can create an infinite space.

American artist Jenny Holzer, known for her artwork that has been widely exhibited at international exhibitions, has created three engraved stone walls of texts from important historical sources from across the world. These walls will feature excerpts from Ibn Khaldun's Muqaddimah from the Atif Efendi Library collection in Istanbul, the Mesopotamian bilingual (Acadian/Sumerian) Creation Myth tablet from the Vorderasiatisches Museum in Berlin, and the 1588 annotated edition of Michel de Montaigne's Essais from the Bordeaux Municipal Library.

Holzer commented: “It's delightful to work on this significant new museum. Louvre Abu Dhabi set an ambitious agenda for itself, and raises lively questions about museums and civilisations. It’s a privilege and a challenge to realise an installation that joins Jean Nouvel's architecture and that speaks with the fantastic works the museum will display.  I made my walls in close relation to Jean Nouvel's building, which I saw as an ideal archaic village under a most beautiful futuristic sky dome.”

Works from the permanent collection will be displayed alongside these commissions in the outdoor areas of the museum. Recreating the atmosphere of an Islamic courtyard, an Ottoman octagonal fountain and pavement (18th Century, Damascus, Syria) will be integrated in a contemporary scenography flooded with light.

As part of Louvre Abu Dhabi: Talking Art Series, Giuseppe Penone, Creativity and Commissions will be held on Thursday, November 17 from 4 to 5 pm, during Abu Dhabi Art. The talk will feature Giuseppe Penone and will be moderated by Jean-François Charnier, Scientific Director of Agence France-Muséums.

Located on Saadiyat Island, Louvre Abu Dhabi represents an Arab madina (city) with its 23 permanent galleries, temporary exhibition space, children’s museum, auditorium, restaurants, retail and a research centre. Visitors will be able to walk the promenades beneath the museum’s iconic dome and overlooking the sea, experiencing the museum’s enchanting ‘rain of light’ inspired by the shadows of overlapping palm trees in the UAE’s precious oases where travellers once crossed paths.

Art works displayed originate from civilisations all over the world highlighting universal themes and similar influences (rather than segregated by civilisations like in most Western museums) such as the portrayal of power by rulers, representing the divine, exploring unknown lands and the dawn of globalisation. Louvre Abu Dhabi has acquired more than 600 objects to date including series and collections, some of which will be exhibited with 300 loaned works from 13 leading French institutions.

Born of an agreement between the Government of Abu Dhabi and France in 2007, the name of Louvre is loaned for a period of 30 years, art works from French institutions for 10 years on a decreasing basis as the permanent collection grows and the programming of temporary exhibitions for 15 years.

The construction of Louvre Abu Dhabi building is in its final stages.

Louvre Abu Dhabi will welcome visitors in 2017 and its opening date will be announced soon. 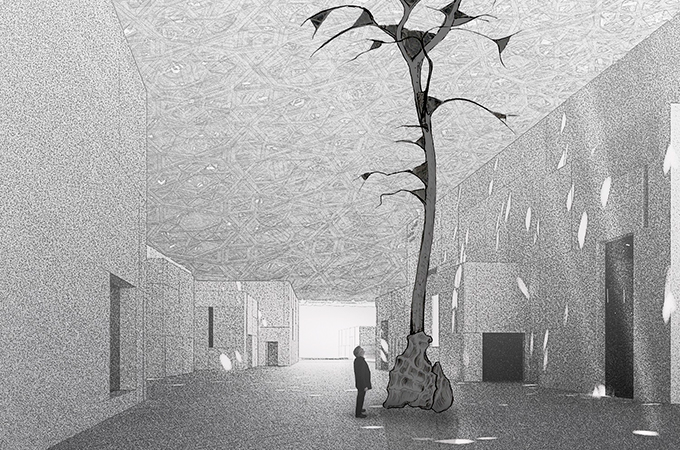