Art & Auctions
Rare jewels to go on sale in Milan

A selection of rare and fine jewellery from famous brands such as Cartier, Bulgari, and Van Cleef & Arpels will be offered to international buyers at an upcoming auction in Milan, Italy.

Il Ponte Casa D'Aste, an auction house specialising in high-end sales of art, jewellery & antiques, will offer the jewellry at a two-day sale on November 15 and 16.

“Customs change but market demand remains the same, increasingly driven by a desire for spectacular jewels, in terms of both workmanship and the quality of their components,” comments Luca Ghirondi, director of the Jewelry Department at Il Ponte Auction House. “In line with this trend, our upcoming Jewellery Auction will offer everything international buyers are looking for.”

Many items bear the most famous names in jewellery making: Cartier, Van Cleef & Arpels, Mauboussin, Bulgari, Pomellato and Buccellati, including an ample selection of earrings, brooches, rings, bracelets and necklaces.

Of particular note are two splendid pairs of earrings by Van Cleef & Arpels, one with diamonds and rubies and the other with natural pearls of exceptional size, as well as a number of characteristic lots from Cartier, including a marvelous turtle brooch and another in hyaline quartz and diamonds.

Among the finest antique jewels made by leading artisans is a necklace of small pearls with a diamond and emerald pendant, crafted in 1930 by Mouboussin, which epitomises the spectacular, one-of-a-kind pieces produced by that atelier over the centuries, still valid and much sought after today.

The auction will also feature, along with an important sapphire ring, an historical piece by Bulgari:  the “Trombino” engagement ring given by Giorgio Bulgari to his future bride, Leonilda,  in the early thirties, later reprised to satisfy the insistent demand from Hollywood stars and members of the international jet set, to the point that it became one the maison’s iconic models.

The jewellery will be on display at the auction house, which is located in the historic Palazzo Crivelli, in the days immediately preceding the auction (November 11, 12 and 13).

The house will also showcase rubies from Burma, sapphires from Ceylon and Kashmir, emeralds from Colombia and diamonds, among them a splendid navette cut of 5.03 carats, colour D, clarity VVS1; an exceptionally rare stone.

Natural pearls, increasingly rare and very much in demand these days, are included in some ten lots, including a standout necklace from the turn of the last century, with 16 graduated teardrop pearls, truly unique: a talisman from a era that will never be repeated, says Ghirondi. 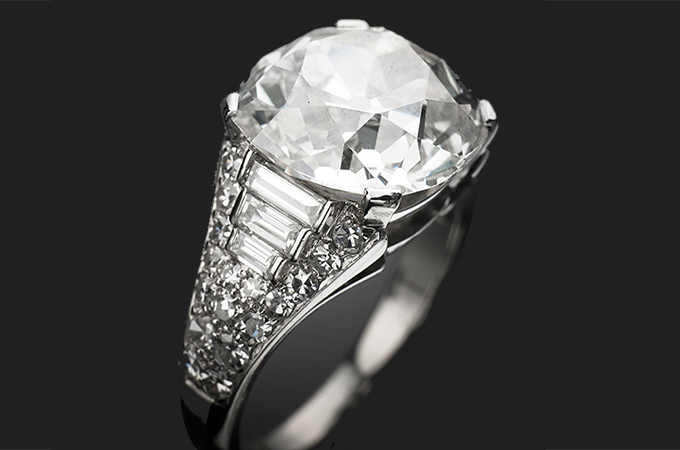