Art & Auctions
Ottoman masterpieces to go on show in Sharjah

A collection of priceless Islamic artefacts from 16th-17th century Hungary is to be shown in the Arab world for the first time at the Sharjah Museum of Islamic Civilization.

The rare pieces present visitors with a window into the lives of the Ottoman and Hungarian elite some 500 years ago, as well as an insight into methods of workmanship perfected by local craftsmen at the time.

Running from October 26 to January 19, 2017, the exhibition marks the inaugural collaboration between the Sharjah museum and the Budapest Museum of Applied Arts, which was established in 1872.

Manal Ataya, Director General of Sharjah Museums Department, said: “We are very honoured to be hosting an exhibition of artefacts that have never before been seen in the Arab world.

“Sharjah Museums Department is constantly seeking to partner with the most respected and ground-breaking cultural institutions around the world, and we are thrilled to be teaming up with the Budapest Museum of Applied Arts - one of the oldest and most important museums of its kind.

“We have worked closely together to choose items exclusively for this exhibition from the museum’s extensive and internationally acknowledged collection, and visitors are sure to find much to fascinate and inspire them.’

Budapest Museum of Applied Arts Director General Zoltán Cselovszki underlined the intercultural importance of this collaboration. “This exhibition in Sharjah symbolises one of many new departures for the Budapest Museum of Applied Arts, which will soon be undergoing major refurbishment - including plans for a brand new gallery of Islamic arts and textiles, projected to open to the public in about four years’ time.”

‘Spectacle and Spendour’ captures a period of Hungarian history when parts of the country, mainly the central and southern regions, were under Ottoman rule. During this time, much cultural exchange took place between Hungary and the Ottoman empire, as eastern European elites competed to secure the finest items from Ottoman workshops in order to display their power, authority and sophistication.

Ottoman masterpieces entered Hungary as early as the 16th century as prized token of diplomacy, through trade or as war booty.  Some Ottoman-inspired items were even made in Hungary itself - the result of skills and artistic tastes being transferred across different regions of Ottoman rule.

‘Spectacle and Splendour’ will give visitors the chance to see outstandingly rare and exquisite artefacts that are not only fascinating and stunning in themselves, but also serve as a gateway to learning more about the history of the Ottoman empire and its interaction with Eastern Europe, in particular Hungary.

The exhibition also provides important insights into key aspects of Islamic civilization, such as the symbolic importance of textiles and carpets, the exchange of diplomatic gifts and the importance of horsemanship.

For those more interested in design rather than art history, the pieces on show offer many opportunities to study the artistic and technical intricacies of Islamic textiles, weapons and even horse tack. 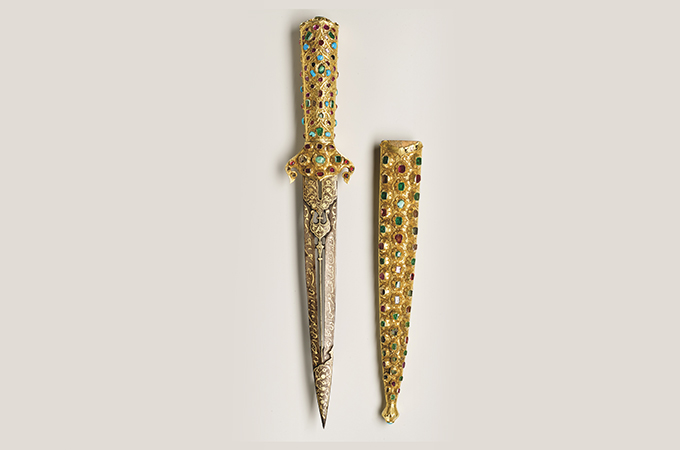