The 4,200 sq ft. four-bedroom, five-storey townhouse was originally built in 1885 and was later redesigned by architect Emery Roth in 1921. The modern classical home has been fully renovated and benefits from an abundance of natural light.

1145 Park Avenue was the New York home of silent motion picture actress Hope Hampton (1897 – 1982), who lived there from 1921 until her death. The lavish purchase of the townhouse hit the headlines, as testament to her explosive screen success in films such as Woman (1918) and A Modern Salome (1920).

However, it was later revealed that the home was a gift from her manager, Jules Brulatour, who she secretly married in 1922. Their blossoming romance was kept secret from the watchful eye of the media, with her husband living just two blocks away at 1207 Park Avenue.

Their marriage was kept a secret in order to maintain the appeal of Hope, therefore all dates between Jules and Miss Hampton were chaperoned. Brulator, once said: “We kept it dark just because we wanted to be a little different. We imagined that it would be rather original for a well-known picture actress not to make known the fact that she had been married.”

In the 1950s and 60s, Hope Hampton became known as the grande dame of New York high society and earned the nickname “the duchess of Park Avenue”, as she would regularly entertain the Duke and Duchess of Windsor, J D Salinger, Aristole Onassis and many other famous faces, during her time at 1145 Park Avenue.

Rich Pretsfelder, Director of Leslie J Garfield commented: “1145 Park Avenue was the home of Hope Hampton, a renowned New York socialite who regularly entertained fellow celebrities and royalty. Unusual for its pre-war build date, the townhouse is a single family home, and has the capacity to entertain up to 200 guests over its five floors, with its separate atrium-cum-bar area, library and formal living room, on the parlor level. I suspect that this townhouse would suit a socialite looking for an esteemed address on the prestigious Upper East Side.”

The limestone façade has three large windows overlooking Park Avenue and Brick Church. Entered via an ornate iron and glass front door is a reception hall, with generous ceiling heights, a tiled floor, and an imposing red wood staircase. Alongside this, is an elevator to all floors - except the guest suite at the top and basement to the rear.

Located off the reception hall is a large formal dining room, featuring built-in storage cabinets and upholstered seating. To the centre, is a Swarovski crystal chandelier.

To the rear of the floor is the eat-in Poggenpohl kitchen, featuring top of the range appliances, including eighteen-bottle wine cooler, and full-height fridge/freezer. There is a separate preparation island with integrated washbasin, backlit cabinets, low hanging chandeliers and skylight.

The parlour floor offers an abundance of entertaining space with formal living area, library, and atrium with terrace area access. The living area has a dramatic floating staircase, and views onto The Brick Presbyterian Church.

Accessed through sliding doors is the library, which encompasses a full wall, with a central integrated flat screen television. Beside the library is the atrium and terrace, with integrated sound system.

The third floor is dedicated to the master suite, which offers a day room-cum-private study to the front of the property, and to the rear is the master bedroom with walk-in-closet and en-suite bathroom. The bedroom has a dressing area to the rear. The en-suite master bathroom is accessible from both the day room and master bedroom. It provides caesarstone sink with medicine cabinet below, and feature vanity lighting above. There is a large bathtub with mirrored wall, and step access to a further dressing room.

There are two further bedroom suites on the fourth floor, both en-suite, and ideal guest quarters on the top floor with bedroom, closet and bathroom.

The basement of the property provides washer and separate dryer facilities, boiler access, and ample amounts of storage space.

Local amenities surrounding 1145 Park Avenue include restaurants such as Café Centro, which serves upscale French/Mediterranean cuisine. In terms of bars residents can take a trip to the Park Avenue Tavern, or Lea Wine Bar where cocktails are served daily. The property is moments away from Hunter College and the art galleries of 5th Avenue including The Met, Guggenheim and The Copper Hewitt, along with Central Park. 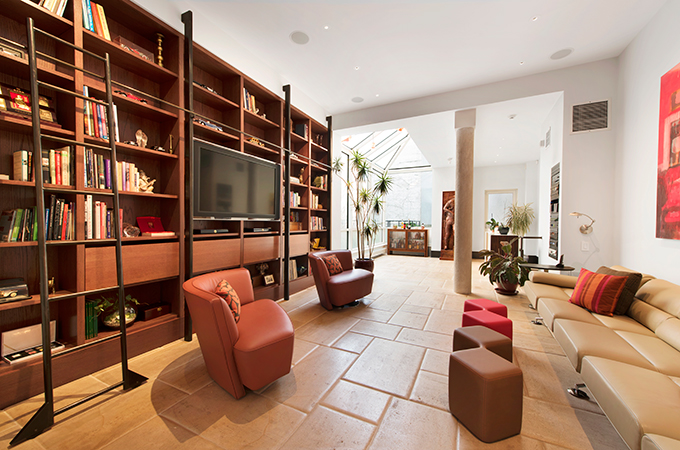 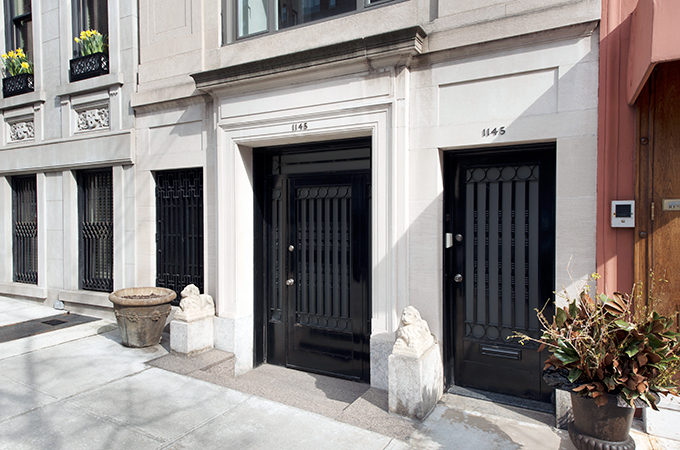