A rare gold coin from the first dynasty of Islam could fetch close to $400,000 when it comes up for auction next month.

One of the rarest gold coins of the Islamic world, the relic will be auctioned by specialist auctioneers Morton & Eden in London on October 20, when it is estimated to fetch up to £300,000 ($390,000).

More than 1,300 years old, this pure gold ‘dinar’ is a little smaller than a UK one-pound coin, measuring approximately 20 mm in diameter and weighing 4.25 grams.

The dinar was issued when the Islamic world was controlled by the Umayyad dynasty.  It was struck under the Caliph Al Walid I in the Islamic year 92h, which equates to AD 711.

At its zenith, the Umayyads controlled the fifth largest empire known to history, both in area and proportion of the world’s population, stretching from Spain to Northern India.

What makes this coin so rare and desirable is the fact that the gold from which it was made appears to have come from a mine owned by the Caliph himself.

Islamic coin specialist Stephen Lloyd of Morton and Eden explains: “As with all Umayyad dinars, most of the inscriptions on this coin come from the Holy Qur‘an.  But this one is one of a very few known which bear two additional lines reading Ma’din Amir al-Mu’minin, literally ‘Mine of the Commander of the Faithful’, which was the title held by the Caliph.

“The Caliph was all-important. As the successor to the Prophet Muhammad, he was the supreme religious and political leader of the Islamic state. It is this direct link to the Caliph which, combined with its age and rarity, makes this dinar so significant.  Coins with this special inscription were only ever struck in extremely small quantities - we know that the die for the obverse which bears the additional all important lines of provenance was used so sparingly that it survived for about four years. These dinars represent one of the greatest prizes to which any collector of early Islamic coins can aspire.”

Coins with this intriguing legend are only known to have been struck in 89h, 91h, 92h (as here) and 105h, the latter bearing the additional inscription bi’l Hijaz.  Gold is still mined in this region, located within the present-day Kingdom of Saudi Arabia, and this gives a strong hint that the gold used in this coin may have come from a similar source – if so, these would be the first Islamic coins with links to the Kingdom.

There is even an on-going debate among scholars as to whether there might be a connection between these coins and the Hajj pilgrimage. Regardless, these dinars remain among the most sought-after of all early Islamic coins.

Most of the other known coins of these dates are held in private collections or major international museums, including the British Museum, the Bibliothèque Nationale in Paris, and the National Museum of Qatar.

Lloyd added: “It is very difficult to give an accurate idea of how much ‘buying power’ the dinar would have had when it was originally issued. Even then however it would have represented a significant sum, probably something like £500 to £1,000 in today’s money.”

This particular specimen has been consigned for sale from a European private collection.

Another important early Islamic coin in the same sale is an Umayyad dinar struck in Ifriqiya (‘Africa’, assumed to be Al Qayrawan in present day Tunisia) in the year 116h (AD 734). This type of coin is not previously known from this year, filling in a gap in our knowledge of early Muslim Spain and North Africa (estimate £20,000-25,000).

Other coins range in date from the earliest days of Islam up to modern times and the auction is expected to draw interest from collectors and institutions around the world.

The sale, held by Morton & Eden, will take place on October 20 in one of Sotheby’s London salerooms. 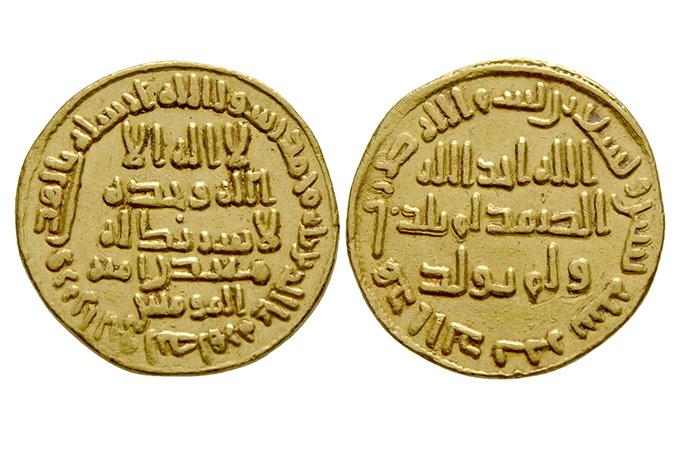