Christie’s will be offering a selection of rare Nautilus watches at four upcoming Autumn sales to commemorate the launch of the famous steel sports model 40 years ago by Patek Philippe.

The autumn season starts in Dubai on October 19 at the Jumeirah Towers hotel, followed by sales in Geneva, Hong Kong and New York.

A total of 40 watches will be offered across the four sales.

Launched in 1976, the Nautilus was distinguished by its use of stainless steel as the prime metal for the model, as well as its large 42-mm case which quickly gained the nickname “Jumbo”.

Water-resistant to 120 m, it was given the reference 3700/1 and christened Nautilus in honour of Captain Nemo’s submersible craft from Jules Verne’s novel Twenty Thousand Leagues under the Sea.

Designed by Swiss jewellery designer Gérald Genta for Patek Philippe, the Nautilus’s design was based on the shape of a porthole of a transatlantic liner with wide bezel and “ears” at each side evoking the large hinges of those watertight windows.

Since then the model has been subtly updated over the years and new models added to the range ensure that the range remains fresh and contemporary.

This reference 3700/1 with an Omani dial is one of only two confirmed examples of the Nautilus model in stainless steel made to order for the Royal house of Oman, distinguished by the national emblem of Oman, the khanjar dagger in a sheath superimposed upon two crossed swords, to the lower half of the dial.

It is significant that the present watch, fresh to the market and preserved in excellent overall condition, has the immediately preceding case number of 536,200.

Of equal significance is the fact that both these watches were sold on the same day: July 31, 1978, proving it was certainly one of the original batch sold to Oman. During those early years there were no official watch agents in Oman and so almost all of the watches made by various brands with khanjar dials were supplied through Asprey of London and occasionally through its Geneva branch.

The sale also presents reference 3700/3, which is a very rare diamond-set version of the gold ‘Jumbo’ Nautilus model. As confirmed by the extract from the Patek Philippe archives, it is set with 112 diamonds with a weight of 1.48 carats. The watch, preserved in excellent condition, has the large-size 16.5-mm bracelet of the first-generation Nautilus. Being made in 1981, it must be one of the very last of the watches made with a Favre-Perret case, confirmed by the presence of their mark inside (estimate: $70,000-120,000).

2016 marks the 10th anniversary of Christie’s Dubai, entering its 21th sale season in the region. The public viewing will start on October 16 at the Jumeirah Towers hotel and the Important Watches auction will be held on October 19 at 7 pm.

Christie’s had global auction, private and digital sales in the first half of 2016 that totalled $3 billion. 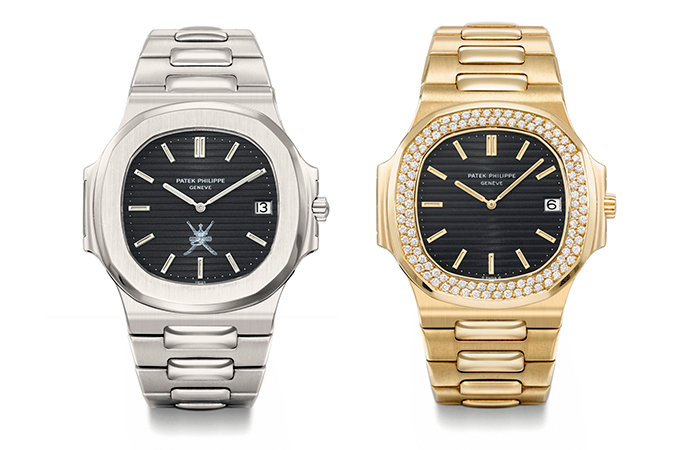