Boeing will showcase its market-leading portfolio of commercial, defense, and services during its participation of the 6th edition of the Bahrain International Airshow 2022 (BIAS) and the 4th Manama Air Power Symposium (MAPS 2022), the official conference for BIAS.

Held under the patronage of His Majesty King Hamad bin Isa Al Khalifa and supported by the Royal Bahrain Air Force and the Ministry of Transportation and Telecommunication, the events will take place from November 8 until the 11.

The theme for MAPS 2022 is “Air Power and Air Defense in the Era of Transformation, Automation, and Integration”. During this event, Boeing will take center stage to share its expertise on the local defense sector in Bahrain and explore opportunities for further cooperation.

With this year’s event programme for BIAS built around four thematic areas covering Airports and Airlines, Cargo and Logistics, Women in Aerospace, and Space, Boeing will also demonstrate its contribution to the local aerospace sector in Bahrain and its growing services, commercial, defense, and engagement capabilities, said the company.

“The GCC and the wider Middle East, and Africa (MENA) are some of the most progressive and innovative regions in the world when it comes to aerospace. In Bahrain, a forward-looking and strategic vision has allowed the Kingdom to accomplish a wide range of achievements and successes in several different fields, including the hosting of significant international exhibitions in the fields of aviation, research, technology, and space,” said Kuljit Ghata-Aura, president of Boeing Middle East, Turkey and Africa. “BIAS provides an important opportunity for Boeing to meet with existing customers face-to-face, as well as potential prospective partners and customers in the country, which is why we have participated over the years and are returning this year.”

At BIAS, Boeing and its subsidiaries will be showcasing advanced platforms and capabilities including:

 Insitu’s Integrator ER, which delivers ISR capabilities in an affordable, long-range Group 3 UAS. The Integrator ER can provide Group 4 & 5 capability in a 75kg UAS. Extended range operations include 14 hours of time on station at 550km and 20 hours at 350km. The Integrator ER employs high-quality, full-motion video on par with much higher-priced ISR systems, while flying at acoustically and visually undetectable altitudes. It is designed for easy integration with multiple field-swappable payloads and can be operated by a fraction of the maintainers and mission commanders required for a Group 5 UAS.

With its unique geographical position and terrain characterised by vast distances over land and water, defense assets in the Middle East must be agile, responsive and versatile.

With more than 60 years of combat and humanitarian experience, the CH-47 Chinook is a reliable and advanced heavy-lift helicopter, with 950 Chinooks flying in 20 nations around the world.

 KC-46A: The KC-46A delivers more fuel at all ranges and from shorter runways than the KC-135 aircraft it’s replacing — while utilising less ramp space than competing tankers — ensuring mission reach from forward and austere airfields. The KC-46A is now approved by the Air Force to operationally refuel 97% of the joint force -- including 5th Gen stealth aircraft -- as well as support highest priority missions such as Presidential support and real-world operational missions. The combat-readiness and agile-combat-capable design of the KC-46A enables more booms in the air throughout the operational theater, making it the ideal aircraft for refueling missions.

 Harpoon Block II features an autonomous, all-weather, over-the-horizon strike capability. It is ideal for both anti-ship and land-strike missions. These versatile weapons can be launched from aircraft, ships, submarines or mobile coastal defense vehicles. Harpoon Block II is a proven weapon system that can accurately locate and hit a variety of targets using its global positioning system aided inertial navigation. Boeing has been building and upgrading the Harpoon for over 40 years. Harpoon Block II missiles are used by 30 international allies. More than 600 ships, 180 submarines, 12 different types of aircraft and land-based launch vehicles carry Harpoon missiles today.

Boeing will also showcase solutions and capabilities from the Boeing Global Services portfolio, which includes sustainment, modifications and modernization, upgrades, training and maintenance services, many of which are deployed in support of governments in the region today.

Looking ahead, Boeing’s Commercial Boeing Commercial Market Outlook (CMO), forecasts that the region’s fleet is forecasted to expand to 3,400 airplanes in the next 20 years, to serve fast-growing passenger traffic as well as cargo demand.

With the partnership between Boeing and Bahrain dating back to 1977, Boeing investments have helped grow the local aerospace sector, creating jobs and driving innovation for mutual benefit. With the Bahraini market continuing to require a versatile fleet that meets the demands of airline and air-cargo business models, Boeing will continue expanding its presence in Bahrain and is committed to growing indigenous capabilities. 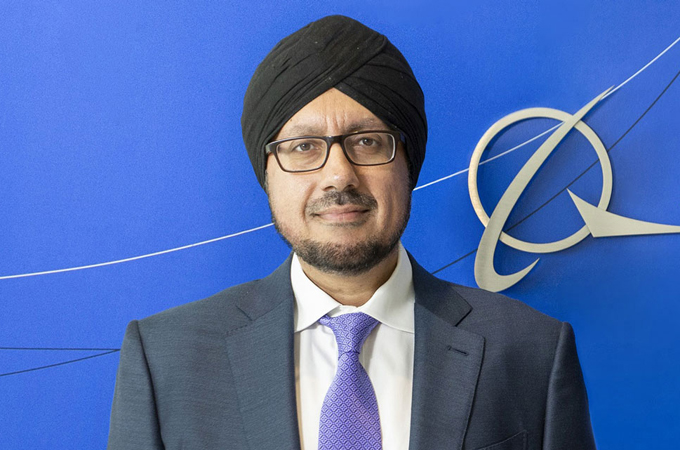