Lovers of fine jewelry are expected to bid to up $9 million for a rare ruby that will be the star of an upcoming sale by Sotheby’s in Geneva, Switzerland.

The Graff ruby ring will be part of a “landmark” single-owner sale of 16 beautiful and highly important jewels from the collection of Greek financier and collector Dimitri Mavrommatis.

This collection brings together very rare precious stones and avant-garde jewellery designs, reflecting the unerring instinct of this consummate collector, and placing it among the most important ensembles of jewels and gemstones, says Sotheby’s.

The 16 treasures, to be presented at Sotheby’s Magnificent Jewels and Noble Jewels sale on November 12, are estimated to bring more than $20 million.

David Bennett, Chairman of Sotheby’s Jewellery Division for Europe and the Middle East, says: “This outstanding collection presents exquisite gemstones, such as the sensational Graff Ruby, alongside stunning jewellery creations by JAR. It is a testament to Dimitri Mavrommatis’ discerning eye and impeccable taste, and presents a rare opportunity to acquire gems and jewels of exceptional quality.’’

Inspired in 1982 by the galleries of New York’s Metropolitan Museum of Art, Mavrommatis began a lifelong interest in the fine and decorative arts. Twenty-four years later, in 2006, the French government made him a Chevalier de l’Ordre des Arts et des Lettres.

A defining trait among the most discerning collectors is the ability to exercise their connoisseurship across different categories, and Mavrommatis demonstrates this perfectly, combining contemporary art with 18th century furniture and exquisite porcelain.

In 2008, art lovers were given the rare opportunity to acquire works selected by Mavrommatis during Sotheby’s sale of property from his London residence.

Leading this unique jewellery collection at this month’s Geneva sale is the exceptionally important and exquisite “Graff Ruby”, weighing 8.62 carats. The cushion-shaped Burmese stone possesses the rare vivid red hue known as ‘pigeon’s blood’, according to a report from the Swiss Gemmological Institute (SSEF), and is also of outstanding purity and superb brilliance. The SSEF states further that the ruby “with its combination of outstanding characteristics is a very exceptional gemstone”. The piece carries an estimate $6.8 million to $9 million.

Among the other standout pieces which will be offered is a rare and exceptional sapphire, weighing 27.54 carats $3 million to $6 million. The stone, which is certified of Kashmir origin, exhibits a very attractive and saturated velvety blue colour, combined with a very high purity. These features elevate Kashmir sapphires above all others and the appearance of such a fine example weighing over 20 carats is an extremely rare event.

The selection will feature three exquisite jewels by American jeweller Joel A Rosenthal, who designed under the name JAR, and is widely acknowledged as being the most talented jeweller of his generation. Admirers of his work will delight in a pair of superb sapphire, ruby and diamond earrings, each of circular form, pavé-set with sapphires and featuring a delightful stylised cage – one set with a ruby, the other with a diamond. The earrings are estimated between $400,000 and $700,000.

Creations by the celebrated jeweller Graff will also be among the stunning pieces offered. Of note, a very fine diamond brooch of floral design is certain to turn heads. With the flower head set en tremblant and featuring a brilliant-cut diamond weighing 3.31 carats, it is expected to achieve a price between $100,000 and $150,000. 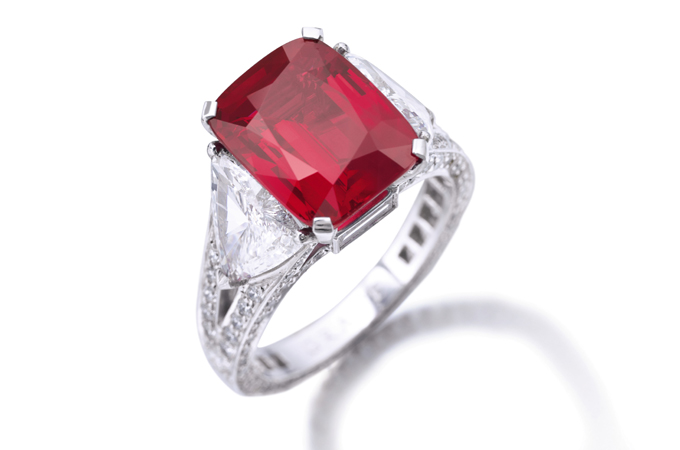