Beechcraft Corporation of the US has received FAA (Federal Aviation Authority) certification for its new Hawker winglets, which are said to deliver a three to four per cent range increase to its Beechjet 400A and Hawker 400XP aircraft in addition to improved fuel economy.

The winglets are now available for installation on both these aircraft at Textron Aviation’s service centres across the world.

With a lightweight construction, the winglets feature a two-year warranty and LED position lights with 5,000-hour average lifetime. The winglet system increases wing aspect ratio to reduce induced drag and allows the airplane to fly farther on less fuel.

Preliminary performance data shows that aircraft upgraded with the winglets should see a three to four per cent increase in range.

Once fully certified, the Hawker 400XPR package will include the Genuine Hawker Winglets and new Williams International FJ44-4A-32 engines, which combined are projected to realize a 33 per cent increase in range along with improvements in runway and hot/high performance.

The engines will enable the Hawker 400XPR to climb directly to FL450 in only 19 minutes at maximum takeoff weight.

Based on preliminary performance data, the 400XPR will fly 1,970 nautical miles with four passengers departing a 5,000-foot elevation airport at 30 deg C.

In addition to winglets and new engines, the Hawker 400XPR package can include upgrades to the aircraft’s exterior, cabin and cockpit, including Rockwell Collins Pro Line 21 or Garmin G5000 flight deck installations.

Part of Textron, Textron Aviation is home to the iconic Beechcraft, Cessna and Hawker brands, which are said to account for more than half of all general aviation aircraft flying.

Textron is a multi-industry company that leverages its global network of aircraft, defence, industrial and finance businesses to provide customers with innovative solutions and services. Textron is known around the world for its brands such as Bell Helicopter, Cessna, Beechcraft, Hawker, Jacobsen, Kautex, Lycoming, E-Z-GO, Greenlee, and Textron Systems. 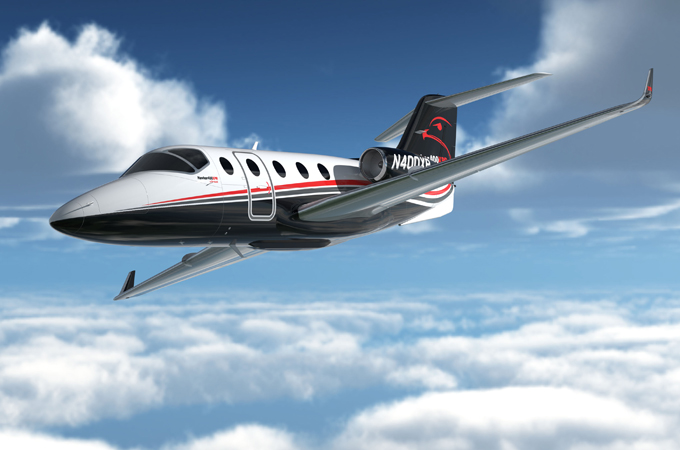