Sotheby’s Orientalist & Middle Eastern Week next week brings together five sales of art, sculptures, and fine objects focused on the region with one work painting expected to fetch in excess of a million dollars.

The five auctions – The Library of Mohamed and Margaret Makiya, The Orientalist Sale, Arts of the Islamic World, 20th Century Art/Middle East and Alchemy: Objects of Desire – will be held at Sotheby’s salesroom in New Bond Street, London, UK.

The first in the series of auctions is the single-owner sale of The Library of Mohamed and Margaret Makiya, embracing the culture of the Middle East and the wider Muslim world, and its connections with Europe, as depicted in books, photographs, postcards, drawings, watercolours, prints and maps. It is particularly rich in works on Islamic art and design, archaeology, Middle Eastern travel literature and history, and architecture.

Held annually in London since 2012, The Orientalist Sale showcases 40 lots representing the finest and most sought- after examples in this field. It will offer a wide array of works by leading painters of this popular genre, led by Ludwig Deutsch’s Morning Prayers of 1902; and a rediscovered painting by Jean-Léon Gérôme, The Grain Threshers, Egypt, exhibited at the Paris Salon of 1861. British artist traveller John Frederick Lewis is represented by five watercolours and by an 1873 oil, Outdoor Gossip. The sale includes numerous views and panoramas of Ottoman Empire, including Alberto Pasini’s By the Fountain of 1882, and Carlo Bossoli’sThe Tatar Khan's Palace in Bakchi - Sarai, Crimea.

Claude Piening, Sotheby’s Head of Orientalist Paintings, comments: “We have assembled a particularly strong group of works by the key exponents of the genre, who hailed from across Europe and America. All shared a fascination for the richness and colour of Islamic world, be it Bedouin life in the Sahara, worship in the mosques of Cairo and Istanbul, or the hustle and bustle of the streets and markets of Egypt and the Levant.”

Deutsch, an Austrian artist working in Paris who first travelled to Cairo in the early 1880s, is revered for his breathtakingly observed scenes notable for their meticulous details. This year’s sale will be led by Deutsch’s Morning Prayers, a luminous masterpiece of 1902. Estimated at £500,000-800,000 ($706,000-1.13 million), the work demonstrates the artist’s respect for Muslim worship. A powerful and noble evocation of the rites and religion of the Muslim world, Morning Prayers depicts two men absorbed in prayerful contemplation, facing towards the mosque’s mihrab indicating the direction of the Ka’ba in Makkah. The identity of the mosque which forms the setting of the work is not known. The lack of architectural detail and the simplicity of the backdrop serve to focus attention on the prayer sequence which so captivated Deutsch and other Orientalist painters used to Christian worship. The minute detail and photographic realism of the painting, from the mother-of-pearl inlaid kursi cabinets and Syrian pendant lamp to the Persian Sauj Bulagh rug – a myriad of textures and surfaces, hard and soft – betrays Deutsch’s rigorous academic training in Paris.

Among the other key offerings in the sale is a group of works by John Frederick Lewis. Outdoor Gossip, a jewel-like oil of 1873, of two gentlemen of Cairo exchanging news (and the pendant to Indoor Gossip) is estimated at £300,000-500,000 ($423,000-706,000); four exquisitely fresh drawings will also be presented, three figural, one of a mosque interior, which have descended in the artist’s family. Outdoor Gossip was exhibited with its companion painting at the Royal Academy in 1874. This seems to have been the first time Lewis shows male and female gendered spaces as a deliberately contrasted pair. While his women are pampered, sequestered, enclosed, his men are relaxed, unrestricted and involved in debate, reflecting the perceived conventions of Eastern society. Indoor Gossip contains an enigmatic twist characteristic of the artist: nearly two-thirds of the painting is occupied by an interior space in shadow, and although the outside world is glimpsed, the figure standing at the threshold faces inward

Lewis spent ten years living in Cairo, dressing as an Egyptian and assimilating into Egyptian society. During this time he visited Sinai, passing through Suez en route. Seated Arab Merchant at Suez, estimated at £40,000-60,000 ($56,500- 84,700), is an informal portrait in which the sitter is neither romanticised nor patronised, but portrayed as Lewis found him. Lewis brings an equally intense scrutiny of facial features and garments to Albanian Guards in Bursa, Turkey, estimated at £50,000-70,000 ($70,600-99,000). The artist has deliberately left out the surroundings, so as to focus more intently on the guards’ magnificent apparel and impressive array of weaponry.

Sculpture is represented in the sale with a particularly fine and rare lifetime cast of Cheval turc No. 2 by Antoine-Louis Barye, described by the celebrated French critic Théophile Gautier as ‘Le Michel-Ange de la Ménagerie’. Considered the inventor and undisputed master of animalier sculpture, Barye created an exceptional oeuvre in which animal subjects were used by the sculptor to represent extremes of power and emotion. The Cheval turc is regarded as the model which most forcefully epitomises Barye’s unique vision.

Estimated at £50,000-70,000 ($70,600-98,800), Cheval turc No. 2 is not only steeped in the Romantic spirit of Barye’s own age but also recalls the Antique equestrian group of Marcus Aurelius, and the Renaissance precedent of Leonardo da Vinci’s drawings of a rearing horse. During his career, Barye produced thousands of drawings and expertly transposed his draughtsman’s sense of shape and profile into three dimensions.

An extraordinary collection of 453 Vienna bronzes will be offered in a single lot, with an estimate of £300,000-400,000 ($423,000-565,000). Many of the bronzes in the group were produced by the Franz Bergmann foundry, the most famous of the 50 or so Viennese foundries producing ‘Vienna bronzes’ at the turn of the 20th century. Each piece is by definition unique, for while they were cast in small editions of 10 to 30, each was individually ‘cold painted’, coloured by hand by the many anonymous artisans employed by Bergmann’s workshops. With subjects ranging from street merchants to camel riders, some of the pieces have been fashioned into lamps.

Istanbul (then known as Constantinople) was a city with a magnetic pull for late 19th-century Western artists. Estimated at £200,000-300,000 ($283,000-424,000), By the Fountain by Alberto Pasini is an exceptionaly fine example of the Italian artist’s carefully observed, naturalistic street views, and his reputation as both a fine draughtsman and meticulous colourist. Dominating the composition is a circular, domed rococo fountain typically found in public squares in Turkish towns and cities. Ottoman 'fountains' sometimes incorporated a counter, or sebil, from which refreshments would be served. Here, a man drinks from a tap or çeme, above a carved marble basin. Pasini first travelled to Constantinople on his landmark journey to the East in 1855, which began his career as an Orientalist painter. In this work, Pasini brings together his observations of life in Turkey: ladies in their veils on a market stall, street sellers both negotiating deals and awaiting customers, a resting rider, and tethered horses awaiting the return of their owners.

The searing desert heat and strong light is perfectly captured in The Wadi at Bou Saada by Eugène Giradet, estimated at £150,000-200,000 ($212,000-283,000). In 1874, Giradet embarked for Morocco, then travelled to Tunisia and Algeria, for which he developed a particular fondness. He spent subsequent visits in Algiers and Boghari, but above all in El Kantara and Bou-Saâda, in the foothills of the Saharan Atlas, painting everyday scenes.

Meanwhile, featuring over a thousand years of artistic exchange and influence in the Islamic world from China, to India, Persia, Turkey, North Africa and Europe, the Arts of the Islamic World sale will be led by a magnificent Ottoman tortoiseshell, mother-of-pearl and brass-inlaid scribe’s box of exquisite craftsmanship from the sixteenth century. Also hailing from the Ottoman world is a superb dagger with a blade finely inlaid with gold with a carved Mughal jade hilt. One of the earliest works included is an extremely rare Qur’an leaf written in Eastern Kufic script on a background of delicate foliate scrolls from a manuscript dated between 1075 and 1125 AD.

Sotheby’s will also present important works of art from the collection of the distinguished lawyer, journalist and advisor to the ‘Ali Pasha dynasty at the turn of the twentieth century, Octave Borelli Bey (1849-1911). These works provide a rare insight into the lifestyle of one of the most influential French expatriates in Egypt, revealing the unique aesthetic of his French chateau.

Finally, another single-owner sale, Alchemy: Objects of Desire, features modern and contemporary Iranian and international art spanning continents and cultures. Assembled by a collector who is himself an artist, the collection reflects decades of connoisseurship and collecting defined by cross-cultural encounters, and includes works by Charles Hossein Zenderoudi, Farhad Moshiri, Cy Twombly, Robert Rauschenberg and Hervé van der Straeten. 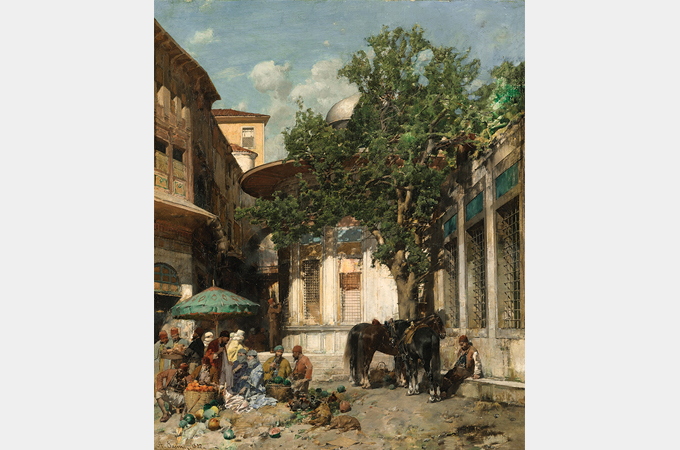 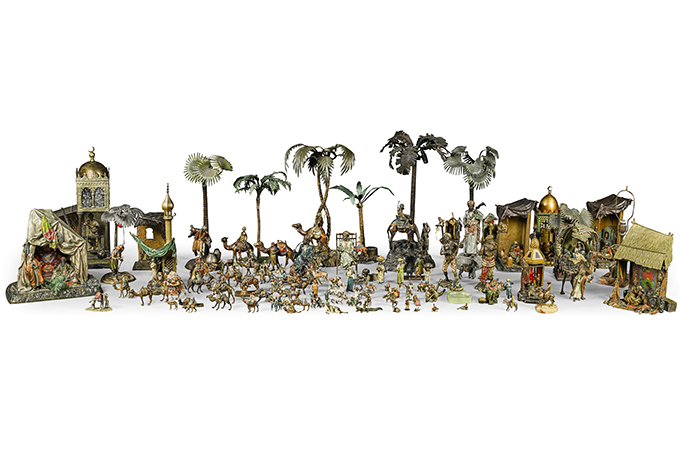